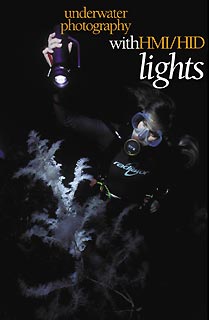 HMI technology is not new. It evolved in the late 1960s when lamp developer Osram began producing HMI bulbs for the film industry at the request of German television seeking a less expensive alternative to incandescent lights. Ironically, HMI is now much more expensive than halogen and tungsten. Though the principle behind the HMI / HID lighting has been known for decades in the movie industry, it was only in 1996 that I fi rst saw them used in an underwater photographic application by David Doubilet. Using two 1200 watts units, he created never seen before pictures of fl uorescent corals, mantas feeding at night at Kona and atmospheric imagery of the Chandelier cave in Palau. I was immediately hooked on the idea of using a continuous light source that illuminates at day light temperature -5600Â° Kelvin similar to an underwater strobe or electronic flash.

Watt for watt, Hydrargyrum Medium-Arc Iodide (HMI for short) lights are two to four times brighter than their tungsten equivalents. Their application has revolutionized motion picture photography in films such as the Abyss, Titanic and IMAX productions like Volcanoes of the Deep Sea. Since no fi lament is used, HMI lights are much more robust and less sensitive to shock and vibration. Generally the unit uses a separate electronic ballast to regulate power input and they are the lights of choice for ROVs in deep sea documentary productions. Until the last few years, those used in the movie industry were huge units of 600 watts to 2500 watts requiring surface supplied power thus logistics and the cost of rental

precluded the use even by professional underwater photographers. However with the demand of underwater video makers, a few innovative German manufacturers have started to produce units in the range of 24w to 100w.

Despite the extraordinary illumination quality, the principal draw back of HMI application is its cost. Whereas a 50w halogen light costs less than USD300, the 24 watt equivalent HMI costs in excess of USD1500. So with prices like these, why bother with HMI? During the last few years, I have experimented with the big guy's 1200w rented from PANAVISION for the 24-hour shoot in the Maldives, 50w units by Treble-Light and most recently the 24w Solaris Pro from Keldan. Each of them serves an application, achieving impressive results.

The main advantage for digital photography is apparent. With a SLR camera capable of firing 6 to 9 frames per second, there are no underwater strobes capable of recycling to keep up with the camera firing speed. Keeping unnecessary light out between the object and the camera reduces the illumination of undesired back scatter. In this department, a HMI light source is more forgiving than an electronic flash. I also fi nd that light from HMI's seems to have the ability to "wrap around" the subject, seemingly able to enhance depth and soften shadows. Powerful units like the 1200w to 2400w units provide greater true-color rendition over a wide area, making them an ideal illumination source for filming wrecks and wide seascapes. Here are some examples of my work with HMI lights.

1. I used a Ikelite DS125 set at 1/4 power to light up the face of the model, she in turn used a Solaris Pro to light up the white coral tree.
2. This image was shot during the documentary production of "24 Hours Beneath the Rainbow Sea in the Maldives". We hired from PANAVISION 600w and 1200w HMI for the shoot.

3. This is one of the 110 frames I captured of this squid with a NIKON D1X; I fired continuously while using a SOLARIS PRO as the light source.
4. With the use of UV filter on a Treble-Light 50W HID light, I am able to bring out the fluorescent property of this hard coral.

This article was originally published in Scubadiver Australasia issue 2 - 2005