Discovering the endless in Endless Ocean

"Swim, interact, and observe! Experience the wonders of the ocean through Wii"

This is is how Nintendo's Endless Ocean game is described on the packaging which includes an impressive underwater scene vibrant with undersea life. The game, unfortunately, does not live up to the cover.

The general objective of the game is to "explore the mysterious depths" of the Manuaurai Islands by moving your boat, diving, getting to know the creatures and doing a little dive guide work with clients along the way.

You begin by creating your character after which you are taken to the boat that you share with Catherine who you find out cannot herself swim and really just acts as a fairly unhelpful helper. Straightaway it's a little odd to find that she doesn't speak and you have to scroll through short spurts of text. Get used to it as the whole game is like that; none of the characters you meet have any audio, instead they wave a hand here and there to indicate that they are actually having a conversation, while you read what they are supposed to be saying. This makes the game-play feel quite lifeless and flat and was quite tedious for the younger players whose reading speed wasn't always up to skimming through it. 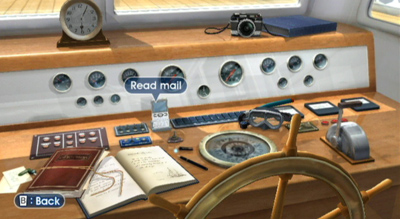 After getting the hang of navigating around the boat you realise that the lounger that you are supposed to use to relax and enjoy the scenery is surprisingly pointless as once seated you cannot actually look around the scenery at all, nor is it particularly animated. The bow of the boat occasionally has creatures, like penguins, that come on board. The cabin is the main point of action and needs to be specifically entered by pointing at the door and clicking the A button. Again, get used to that as you'll be doing that a lot too!

Inside the cabin is your control centre where you can choose to rest, look at your species log book, read email, change your gear, move the boat or save the game so far. A word of advice; remember to save your game here as we played it for a while not having realised that it needs to be manually saved and subsequently lost a lot of our progress on the next session.

Once acquainted with the boat it's finally time to actually dive which you'd think would be as easy as using the steps at the stern of the boat but, oddly no, you have to click the control pad on the Wii remote to bring up the "tools menu" from which you choose "dive" and then need to confirm that you wish to "dive into the sea?". This had us a little confused as to what other reason for clicking the tools menu to select dive could mean other than diving into the sea, we nonetheless confirmed our intention. 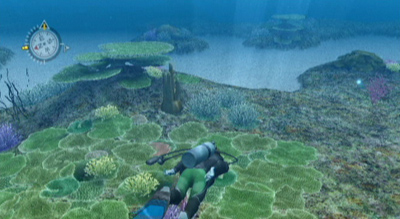 During the descent you have the option of choosing your musical accompaniment which is initially a choice of two looping tracks but does change a little throughout the game. If Enya like music isn't your cup of tea you can also use your own MP3's via an SD card plugged into the Wii. This option would undoubtedly have made the game a lot more fun but we didn't have one and found that, under the circumstances, choosing the question marks allowed us to have a more pleasant, music-free dive.

Navigation while diving is simply a case of clicking the B button to start swimming and using your Wii remote to direct your character. There is a small quirk where your character stalls if your pointer drifts off screen which takes a little getting used to. We found that clicking the 2 button also allowed us to change the view to a through-the-eyes view which improved the sense of actually being in the water.

From hereon in your tasks start with the first being to get to the lagoon and learn to pet and tickle the creatures. Aside from the nagging you get if you try to go off without completing your task, the actual process of "interacting" with the creatures involves having to point at them, clicking the A button and then tickling or using a fiddly, jiggle action to stroke them with a big cartoon hand that looks a little out of character with the other graphics in the game. Aside from the fact that petting or stroking sea creatures is something that real life divers are advised against, the motion itself is quite difficult to master and our kids found it quite frustrating. If you manage to interact enough with your creature a sparkle of stars signals the revelation of their name and from there you get access to information to read.

Your time is fairly limitless so once your main task for that particular dive is finished you can swim around as far as the boundaries for your dive will allow. Each area you cover will reveal more of the map that is accessed with the 1 button. When you decide that you've had enough choosing "return to boat" from the tools menu brings you back on deck where you are greeted with the message "Email received".

At this point I have to digress and question the market for this game. Most SCUBA divers dive for recreation and enjoy the ability to escape into a world so different from the one they have on dry land. Endless Ocean however, seems to have the view that simulating that enjoyment has to include the very same pestering that we all get at work, such as constant emails. The game claims that you get to dive with "unprecedented freedom" but the fact that every dive concludes with you having to repeat the process of getting into the cabin, clicking on the PDA to get email, clicking and reading each email for me at least was quite depressing. Our kids just found it boring.

I mentioned before that Catherine doesn't appear to do much but stand around and I couldn't help wondering why she couldn't have my emails summarised by the time I came up from a dive!

Moving around the islands

After your first dive you are able to move the boat to different locations. Becoming familiar with these locations is necessary when you accept an offer to be a dive guide as your clients will request to see a particular creature in a specific location. An impressed client then becomes the source for new pieces of equipment such as lights or an underwater pen.

At the time of writing we had travelled around about two thirds of the map, however I'm not really sure how much that meant we had "completed". Aside from having to interact with the sea creatures a lot of the game feels a little aimless and I found myself drifting around not quite knowing if I had missed something important. Occasionally Catherine will interrupt to tell you to look out for something like a trinket on the sea bed that you then add to your "collection", but other than that you seem left to fill in the blanks in what is an enormous range of creatures in your species guide on the boat.

Amongst some of the things that we either haven't yet got to the right location or level to use is an aquarium that you are able to add creatures to.

The short answer is that, unsurprisingly, we really wanted to! Unfortunately, the "endless" in the title seems to describe the game in a way that I don't think was the intention; it just seems to go on and on with too little development. The sea creatures are nicely done and there is some sense of being underwater but the locations seem quite sparse of creatures and variety. I kept wishing that the makers had really pushed the game to have more dramatic diving situations and locations that would really live up to its claim of "unprecedented freedom". For example, compared to the real-world diving we can experience around Julian Rocks here in Byron Bay, the game is notably less spectacular. 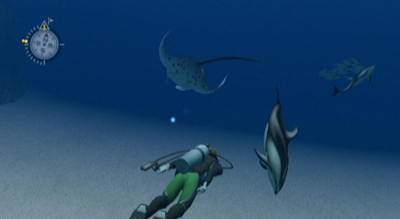 Other reviews I read on gaming sites are actually quite favourable but they seem to refer to it as a kind of chill-out alternative to the normal games they play, rather than on its own merits. Their lack of detail also made me wonder how long they actually played it for.

There is too much repetition of tasks which gets tiring and tasks themselves seem a little lackadaisical. Identifying creatures could for example be a lot more active whereby you are given a set amount of creatures to search out and find. On that note it would have been more fun to have to use a camera (which is apparently available later in the game) to capture pictures of the creatures and add them to your species log than to have to go through the ethically questionable and tiresome process of tickling, stroking and feeding them.

The game does make quite a bit of reference to it's Wi-Fi functionality that allows you to pair up two Wii units over a wireless network and have buddy dives. This would no doubt greatly improve the game, however, the likelihood of finding someone with a copy of the game and willing to pair up like that seems pretty remote to us. In that respect we wished that more time had been put into making the game more involving than on potentially less used features. Why for example couldn't we just join up with buddies just by adding another Wii remote?

If you have an SD card loaded with your favourite MP3's, the weather is shocking for yet another week and you are longing for any chance to get underwater then this may provide mild relief, as long as you don't expect too much from it. I'd really like to have recommended it as a way to introduce kids to the underwater world but our nearly 6 and nearly 8 year olds just didn't get into it enough to be able to do that.

First off we have to give a big thanks to Nintendo Australia who were kind (and brave) enough to provide us with a copy of the game to review. Second thanks go to my two kids who were willing participants in the review process, even if they didn't last at it! Finally, remember that we haven't yet got to a lot of the game and the site linked to at the start of this chapter shows a lot of features we didn't get to, so as with any review, your mileage may vary.