Long prized by primitive people for their shape and attractive colors, Cowrie shells were widely used for money in ancient times. They are also worn as jewelry or otherwise used as ornaments or charms, as they are viewed as symbols of womanhood, fertility, birth and wealth. 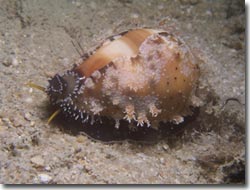 Cowrie shells are sometimes used in a way similar to dice, e.g., in board games like Pachisi, or in divination. A number of shells (6 or 7 in Pachisi) are thrown, with those landing aperture upwards indicating the actual number rolled.

Cowries have also been used in the recent past as a frame over which sock heels were stretched for darning. The cowrie's smooth surface allows the needle to be positioned under the cloth more easily.

Cowrie shells are a favourite of shell collectors because a very deep coating of enamel on the outer surface gives the the shell a brilliantly polished appearance. 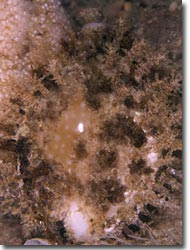 You will find them on many shell markets in third world countries and on shell collector websites. While cowries are abundant in the tropics, some species are now quite rare and get a very high price from collectors.

The reason why these shells maintain such a nice colourfull gloss is that two lobes of the cowrie's mantle (fleshy material that covers the shell) extend out and over the dorsal surface of the shell, meeting at midline, and they continually deposit enamel thus secreting the shell from the top-down while protecting the shell from abrasion, whereas most other shells are secreted from the inside-out, hence the glossy interior of many shells.

Interestingly, the mantle has a totally different color and pattern than the shell. If startled or touched the cowrie can suddenly change colors by withdrawing its mantle completely inside the shell, thus confusing a predator. 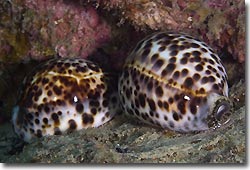 Cowries usually remain hidden during the day in holes, crevices, rubble, or under rocks and corals. While diving we can occasionally find them during the day, but there's a much better chance of seeing them on night dives when they emerge to feed with the mantle fully extended.

In some cases the mantle flaps are brightly coloured, but often they have dull mottled colours with branching papillae, that provide camouflage and assist in respiration. The color of the mantle sometimes matches the sponge it feeds upon.

When a female cowrie shell lays a cluster of small eggs she will sit on them until they hatch. So if you're lucky enough to find a cowrie with a bunch of eggs, don't disturb it otherwise it may not come back to its eggs.

Larvae hatch and float around as plankton before settling. Juvenile shells are very thin and brittle. They look a bit like olive shells and continue coiling as they grow. The outer lip curves inwards and the shell thickens and forms a new colour pattern. Although the shell seems to be bilaterally symmetrical, the newest whorl completely covers the previous whorls. Teeth are formed on the outer lip, on both sides of the lengthwise aperture slit. The opposite side of the aperture is smooth and there is no operculum.

To create more space inside when needed the shell thickens and the interior is dissolved. Young cowries stop coiling at random resulting in a broad size range in adults. The family Cypraeidae has about 200 living species. The basic shape of the shell is the same in all species. 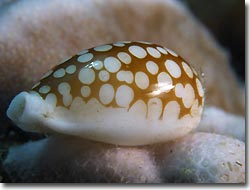 Empty but intact shells are usually the result of predation by cone shells.

There are two main feeding divisions within the family, one group feeding on sponges while the other group are herbivores, though some groups feed on both. 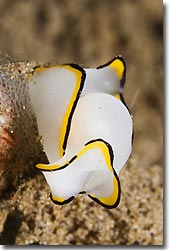 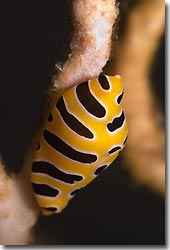 Ovulids are called "false cowries," because of their similarity to the true Cowries, but they are a distinct group. However they are closely related to cowries and belong to the same super family (Cypraeoidea). They usually have smaller shells but otherwise resemble the Cypraeidae and share similar mantle protective habits. 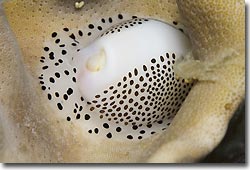 Ovulids superficially look like sea slugs, especially when the shell is hidden. In many ways they have evolved defensive strategies which mirror those found in the nudibranchs.

The highly colored mantle and sharply contrasting spots in some cowrie species result from accumulation of otherwise noxious chemicals retained from their food in the mantle. This feature seems to be an evolutionary adaptation generally characteristic of the entire Cypraeacea superfamily, and shared with the more advanced nudibranch families. 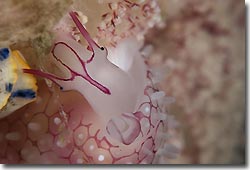 These chemicals are stored in their skin where they can protect the snail from fish predation. When under attack the colored mantle seems to camouflage the mollusc and confound predators.

Allied cowries are found in all waters. It's easier to spot them when the coral polyps are withdrawn or at night with a good light. Check gorgonians and other soft corals and sponges for any irregularities. 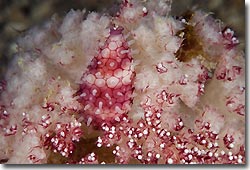 Ovulids are also called Allied cowries because each species tends to live with a specific host organism such as soft corals or sponges. Their adaptation to their host in form and colour is quite astonishing. They take on the shape, colour and texture of their hosts and usually it's hard to tell where one animal ends and the other begins. Only a close look will reveal the mollusk on its host. Each cowrie has a soft mantle that matches the color and texture of its host although there are notable exceptions. Some species have false polyps, some don't. 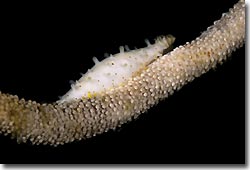 Gorgonians are generally unpalatable and are thus avoided by most predators. By closely resembling the gorgonian, the mollusk also gains protection from predators. Only the mollusk, however, benefits from this relationship.

Allied cowries are, in fact, parasites that harm their host. They feed on the host's tissues, mucus and polyps and absorb pigments that enable the cowries to closely match the host's color. The host continually regrows the lost tissue so the cowrie never runs out of food. 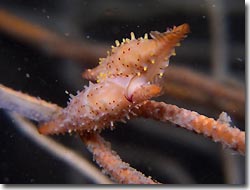 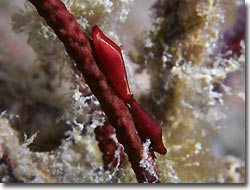 Free-swimming post-larval juveniles probably detect chemical clues that signal a potential host is nearby. Hosts are often home to several individuals. When settled, cowries graze up and down the coral and eventually deposit their eggs on a bare branch, beginning the cycle again. 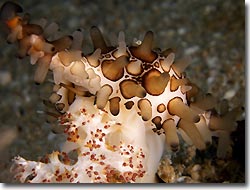 Among the ovulids there is a small but highly diverse group of highly specialized animals which feed on sponges and corals, but the most common food are soft corals (Alcyonaria), whip corals, fan corals (Gorgonaria), and stone corals (Madreporaria). 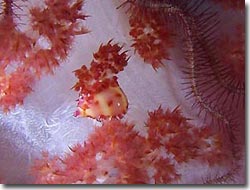 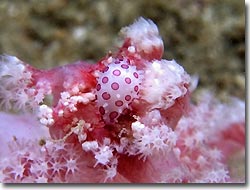 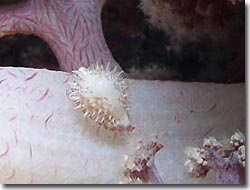 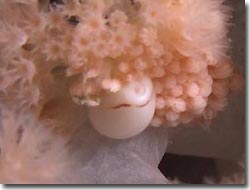 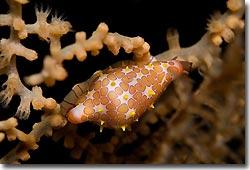 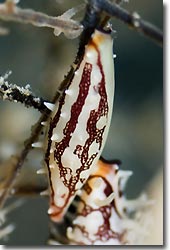 Allied cowries come in different sizes and shapes. The shells of these animals are mid-sized ( 10 cm) to small (3 mm). 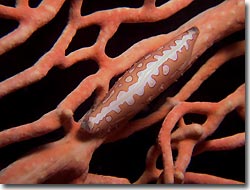 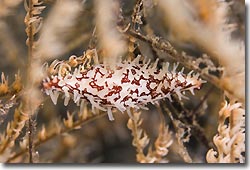 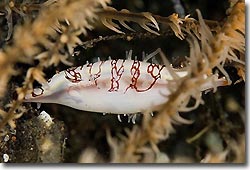 The shell of this allied cowrie is nearly transparent, as the mantle retracts the mollusk can clearly be seen inside the shell. 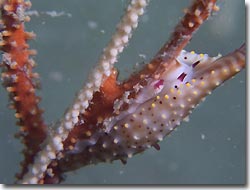 Peeping out at you, but ready to retract my eyes at the first sign of danger.