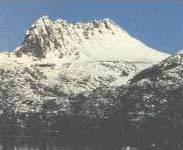 Separated from mainland Australia by the 240 km stretch of Bass Strait, Tasmania is a land apart - a place of wild and beautiful landscapes; friendly, welcoming people; a pleasant, temperate climate; wonderful wine and food.

This octopus was photographed in Eaglehawk Neck, Tasmania, Australia. The octopus was found trapped on the beach. We were witnessing its release back into the wild. Nikon D700 with Sea & Sea housing plus 2 INON Z-240 strobes.
Photocomp June '11 - Open

A Weedy Seadragon in front of the remaining kelp of the once great kelp forest of Fortescue Bay, Tasmania.
Photocomp February '10 - Open

This globefish was a little angry when I managed to kneel on him. He sure let me know about it... Bruny Island, Tasmania, Australia.
Photocomp March '09 - Novice

Edge of the Earth

Come fly with me

One look at the prognostic weather chart told me that we would not sail on schedule. The forecast was for 30 knot north-westerlies with gusts to 45 knots through out the night and for the next 24 hours.

The Tasman Peninsula by nature of its topography is mainly only dived by boat. The cliff height on the east coast averages 250 metres for all but Pirates and Fortesque Bays from Tasman Island at the south tip of the Tasman Peninsula to almost Dunalley at the top of the Forestier Peninsula ...

Tassie Divers to converge on Bicheno!