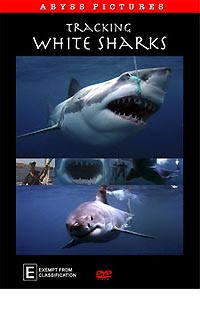 Great White Shark DVD - Having lived on this planet for 15 million years, the great white shark remains the ruler of a kingdom to which we are such vulnerable visitors. They are the most feared and respected of all ocean species known to mankind, but with less than 70 deaths recorded in the history of great white shark fatal attacks worldwide, are they the ruthless killers we label them as? Or are they simply a misconceived apex predator of the sea?

"Tracking White Sharks" is a thriller of a documentary, set entirely off a group of islands that stand 70 kilometres out to sea from the mainland of Southern Australia. It's the abundance of food in this area that attracts the largest of great white sharks in the world. Over 500 great whites have been tagged in these waters, most of which, by former game fishing world record holder, Rolf Czabayski. Working with Australia's leading great white shark scientist, Rolf's continuous tagging research, as he hosts and entertains cage-diving tourists from around the world aboard his luxury Calypso Star vessel, has enabled us to see exactly where and when white sharks travel.