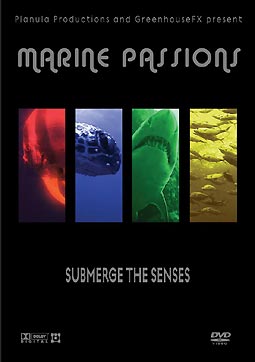 Encounter worlds beyond imagination and submerge your senses in this visual extravaganza. Marine Passions breaks new ground in underwater imagery.

Indulge yourself in breathtaking visuals, set to a fantastic soundtrack in immersive dolby digital surround sound, beautifully aligned to create an outstanding piece of underwater art.

Become suspended throughout this marine journey. Encounter graceful manta rays, inquisitive turtles and awe inspiring sharks. Experience the visual playfulness of the octopus and become one with the underwater world.

Filmed exclusively in Byron Bay, the most easterly point of the Australian mainland and a mecca for marine life. Where warm tropical currents meet the temperate southern waters and the variety of marine critters, large and small, has to be seen to be believed.

Five years of filming, over 1000 dives and hundreds of hours of film went into this production. Filmed and directed by Tim Hochgrebe, Planula Productions with editing and effects by Osvaldo Alfaro, GreenhouseFX.

The soundtrack to this movie includes specially composed sounds by Hewey Eustace (ARIA Award nominee) and Matt Mooney together with seductive tracks by Bhakta and Disha.

For more details on the Marine Passions DVD and to view trailer click here.