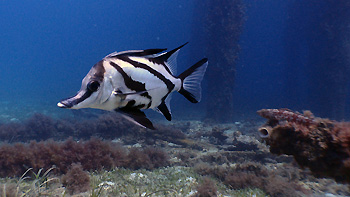 Esperance, Western Australia, the 2nd of January - this was going to be the first dive of the new year for me. It was even more remarkable since I would be diving with my wonderful husband. Remarkable indeed,  with just the two of us! Our children were well looked after by our friends and we couldn't believe our luck. We could dawdle, we could have a conversation without being interrupted by nappy changes or requests for more food and there even were moments of just silence!

From our camp site in Cape Le Grand National Park, we drove to nearby Esperance and picked up tanks and weights at 'Esperance Diving and Fishing' who also provided us with a mud map of the dive site at Tanker Jetty. 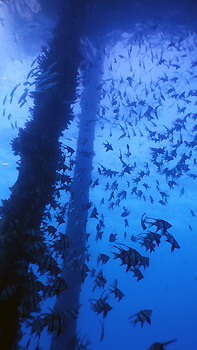 The Tanker Jetty was built in 1934 and was initially used to unload bulk fuel and used for grain export. Originally the jetty was 640 meters long, but in 1985 the head was separated from the rest of the jetty.
You now enter the water at the end of the jetty and follow an underwater trail made up out of artificial reefs leading to the original head of the jetty.

We were lucky enough to find a car park right at the beginning of the Tanker Jetty and I got excited about the fact there was a coffee cart there as well, promising myself a coffee that wouldn't go cold.

We put the tanks, fins, masks, regs on the trolley and carried our cameras and BCs with the weights. It was not a long walk, but we got some looks on our way. Three dogs that were tied up right next to their fishing owner started growling at these strange creatures!

When we got to the end of the jetty we checked the current (non-existent) and took a bearing to the detached head of the jetty. Once we hit the water a crisp 19C came down the wet suit, but I was too excited by the good visibility to really notice. I was happy though that I had decided to wear my MARES 2nd Skin Shorty underneath for a bit of extra warmth.

The sandy bottom was partially covered with different seaweeds as we swam East towards the disconnected head. Between the two different parts 'Esperance Diving and Fishing' has installed structures made out of tires to form an artificial reef. Already growth can be seen and fish dart in and out of the hidey holes, not seemingly worried about our presence. 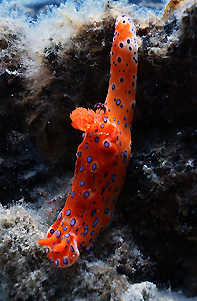 Secretly, we were hoping to find some Leafy Seadragons, but we knew our chances were slim and if we would have dived different sites in the area we could have had more luck with that search. Fortunately, we were more lucky with this quest at Rapid Bay Jetty in South Australia.

Still, it was a great dive with plenty of temperate species that I had sort of forgotten about: Sergeant Baker, Old Wifes - they looked larger than the ones I remembered from back home, and Long-nose Boarfish. A few Ceratosoma brevicaudatum lazily made their way across old logs of wood in the search of food or a mate. These colourful nudibranches are fairly common in these Southerly waters, but they can't possible become a boring sight!

We spent over an hour searching, looking, filming and photographing and hanging out with White-barred Boxfish, schools of herring, Dusky Morwongs and damsels. What a great little shore dive…

Icing on the cake: when walking back we spotted one of the local sea lions that hang out on the beach right next to the jetty. Another perfect day! 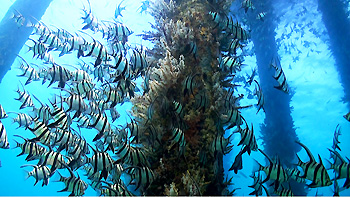 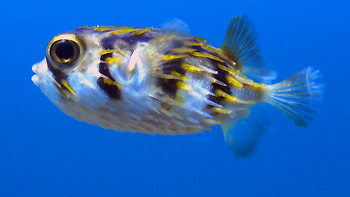