Traveling further down the West Coast of Australia, we noticed the weather changing and temperatures dropping. Of course, that was to be expected. However, the wind did not change and kept blowing strongly most days.

After spending a week in Jurien Bay, the relentless wind had settled and the sky was a beautiful blue. A perfect day to go swimming with some Australian Sea-lions together with my almost five year-old son, Max.

Jurien Bay Charter 'n Dive took us and 10 other passengers to Essex Rocks, where the colony site is located. 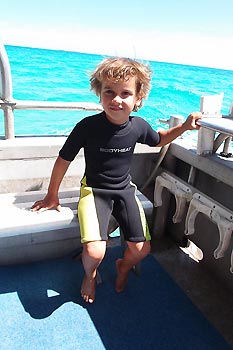 There are less than 15,000 Australian Sea-lions remaining and they only breed on the south and west coast of Australia. About 40 individual animals have been sighted at Essex Rocks off Jurien Bay in Western Australia.

For obvious reasons we were not allowed too close to the shore or to stand on the actual island. As the Sea Lions are wild animals we were also warned to not reach out and try to touch them, however - we were told - they might choose to touch us!

The water temperature was 21 degrees and I opted to only wear my MARES 2nd Skin shorty. This would still allow me to duck dive, but protect me from the cooler water and the sun.

As we slid into the water its coolness trickled down my back. Max and I quickly made our way towards the 'play area' where the water is only a couple of meters deep. This makes the experience also great for people who are not necessarily great swimmers. If need be pool noodles can be used to assist with the snorkeling and of course the wetsuit does increases one's buoyancy as well.

Initially, only one Sea Lion lazily made its way towards us, but before long there were about 10 animals in the water and everybody could have a good look and a play. Now it was up to us humans to entertain them and make it worth their while to not return to the sunny beach! 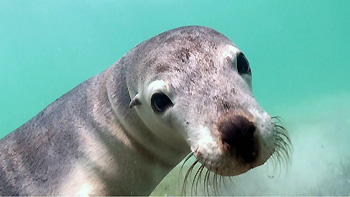 After about 20 minutes Max started shivering and we made the 25 meters back to the boat. Skipper Mitch was waiting for him with a hot Milo and would keep him entertained while I went back for more!

In the meantime the Sea Lions had really gotten into the swing of things, literally. I duck dived and rolled, did backward summersaults while trying to capture the animals with my camera. They were obviously in their element and swished and swooshed past and around us all. Suddenly, one came up to me and I was not sure what she was trying to do until I felt her whiskers on my hand that was holding the camera. My first thoughts were:"wild animal, big teeth…the name is sea LION." But she was gone again before I knew it.

The second time this happened I was much more relaxed and the animal itself felt more confident too. I kept really still, probably held my breath. First its hard whiskers touched my fingers and then its whole nose was pushed into my hand. I was thrilled and looking into its eyes was like connecting with a puppy dog. 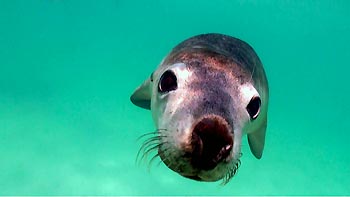 Another younger animal thought it was hilarious to hide between some rocks and while the humans were looking where it went, she would reappear at the other end and hang behind their back, waiting to be spotted. Only to dart away and do it all over again. 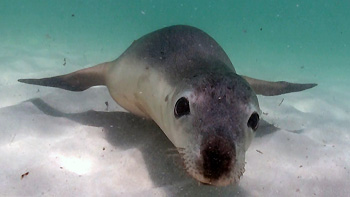 As they are wild animals the experiences vary, but mostly people have a wonderful time. The more crazy actions you do, the better it gets as the sea-lions just love it. This did result in me getting pretty dizzy at times and a lot of salt water found its way up my nose! 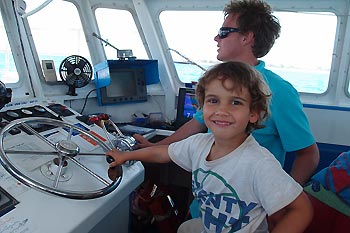 Although I slowly started to feel the cold I didn't really want to get back on board when the time had come to say goodbye. This was despite the fact some yummy muffins and coffee/tea or MILO were waiting for us. I would have happily re-entered the water right after!

The staff definitely added to the relaxed atmosphere and they really let us have a great time. A big Thank You to all the staff at Jurien Bay Dive for an unforgettable morning...