On one day, late October, I was booked on with Ningaloo Reef Dive, Coral Bay, Western Australia for a day of diving Ningaloo Reef and snorkelling with Manta Rays.

The boat that would take us out was spacious with spots for tanks on the sides behind the benches. There even was a proper toilet, which was very convenient - no squatting underneath the skippers seat, hanging next to the 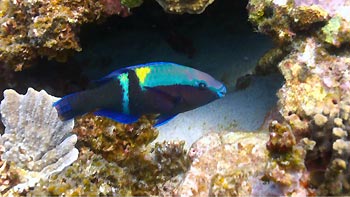 As I boarded the boat I couldn't help noticing - being a woman myself - that all staff members on board were girls - and they rocked!  It is just that diving can be such a blokey thing in Australia and this was a refreshing detail…..   Let's leave it at that ;-)

In any case  the weather was great. There was hardly any wind and the sky was cloudless.

At about 9.30 we arrived at a site called 'Canyons'. This is a shallow site, but has some awesome, dramatic  coral growth left and right as you make your way to the southern end where the cleaning station is. Left and right there were beautiful boulder corals and cabbage corals. On the sand in the middle rather large damselfish were protecting their farmed algae. 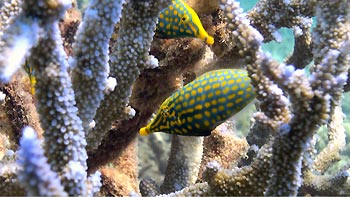 After a bit of a fast swim we got to see three Grey Reef Sharks cruising over, past and in between the huge cabbage coral formations at the cleaning station. They didn't hang around, maybe spooked by the divers below or the snorkelers above. I noticed that there wasn't an abundance of fish though, but we did see quite  few different species just not a lot of them.  Different parrotfish and Picasso Triggerfish were zooming around and plenty of Lizardfish could be seen perching on corals and seaweed patches. The stag horn corals offered shelter for different small fish with a couple of Orange-spotted Filefish amongst them.

It was actually really nice to not be diving a wall and I enjoyed the seascape very much. 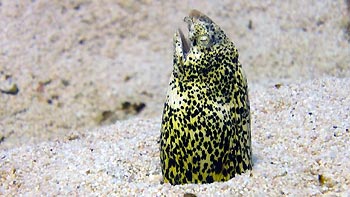 A Snake Eel has also been found at this particular dive site, which is a bit of a treat - if you like ugly beasts that is.
Another animal that makes the odd appearance is the Crown of Thorns sea star. Let me emphasise that regardless of this sea star's bad reputation, in small numbers this animal is also part of the eco-system and plays a significant role. It is actually a really beautiful animal. By eating the fast growing corals it encourages diversity of coral species and therefore indirectly other life as well. Only when there is an outbreak due to an increase of nutrients in the water or removal of its natural predators, does this sea star become a problem.

Not long after we had surfaced from our dive the plane radioed in that there was some Manta Ray action. We were all briefed concisely on how to behave when snorkelling with Manta Rays in order to make sure that the Mantas were not interrupted too much and that everybody would have an enjoyable encounter as well.

It came as a surprise to me to hear that about 450 individual Manta Rays have been identified in Coral Bay and can be seen all year round. Some are regulars and some are never seen again. On occasion larger oceanic Manta Rays come inside the reef too, but this is a rare occurrence and they are generally much more skittish and less willing to entertain the snorkelers. 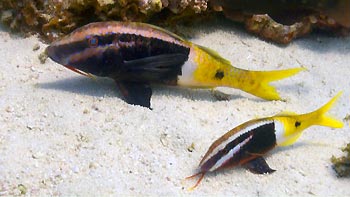 It is important to keep in mind that this is a very natural experience and that at some days interactions might be more extensive and/or exciting than other days.

We were split up in three groups and took turns entering the water. A staff member would give us the go ahead to slide into the water as quickly and quietly as possible, swim towards the spotter in the water and then follow the Manta Ray(s) she had in sight.

When I hit the water I was surprised how unfit I must be since three people up the front just took off and seemed able to keep up with the Manta Ray. Two girls were slower than me, which made me feel a little better, but I kept thinking:"This is different how I imagined it. I shouldn't be exerting myself so much after doing a dive, should I? How come those three people are going so fast?"

Once we were picked up by the boat and we climbed out  I happen to notice that the front three in our group were tall, large guys with long legs. No wonder…. Still, I was disappointed that I had not been even really close to the Manta Ray. 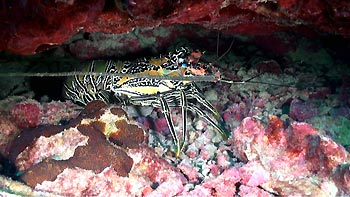 Fortunately, the second time was an improvement to say the least. All three groups had their own Mantas and we all spent about 20 - 30 minutes swimming with them at a much slower pace.

I was able to have a good look at 'our' two Manta Rays. The front one was a female with a wingspan of almost 4 meters. Behind her trailed a smaller male. They just cruised along, swum in circles and we were even allowed to cautiously duck dive one by one as long as we stayed to the side or behind the Manta Rays.

Once everybody was back on board tales were exchanged and everybody was exhilarated. Most would have loved to do this over and over again, including myself. 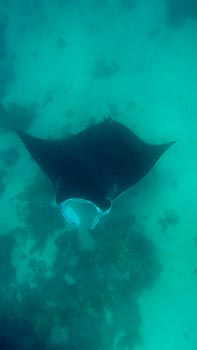 Lunch hit the spot.There was a selection of  breads with a great choice of condiments, vegetables, ham, cheese, salami etc. and freshly cut fruit. And there was plenty of it. I don't think anybody went hungry…. Coffee, tea, cordial and water was available throughout the trip.

Our second dive was at Lottie's Lagoon. It was a pretty site, again quite shallow. Initially there was a lot of sand with coral outcrops and a few overhangs hiding all kinds of fish, including a toadfish and a bearded scorpionfish. Our guide managed to show us everything she had mentioned during the dive brief. I also spotted some different moray eels and nudibranchs, including a few Chromodoris annae.

At one stage I saw one of the divers stick his head right into a cave and the dive guide quickly pulled him out. When I got closer I realised that he had wanted to get REALLY close to the head of a rather large Tassled Wobbegong!! There is always one isn't there?

I could have spent much longer under the water, especially at the end where there was a coral garden. There were a lot of little fish swimming around such as bird nose wrasse, humbugs and damsels farming their algae.

The snorkellers saw some turtles in the shallows, which we missed.

Another fantastic day on Ningaloo Reef came to an end too soon and at night I was pondering about my amazing day on the reef. 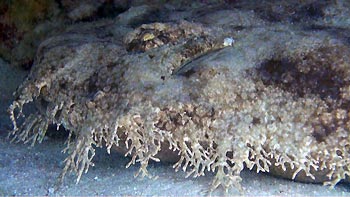 I am always impressed, though not surprised, how much people love to interact with nature and especially with the animals - generally in a positive way. The effort and money spent on this is not insignificant. I do hope that their enthusiasm remains once they arrive back home and that some of it rubs off on other people who otherwise might not have had the interest to look after our oceans and our environment. I probably am in support of showing people what is out there, even if there is a chance of some minor interference with the wild animals. Saying that, I believe it is of utmost importance that  education, regulations and management plans are in place to make sure the animals are not suffering or their lives or that of their off spring is endangered in any way. This balance is delicate, but most of the time a possibility. I believe it encourages and enthuses people to do their bit to protect nature and the environment.