Yongala out of Ayr - A Speedy Ride

I had been waiting to dive the SS Yongala for a long time. The first time I had tried to dive the wreck of the SS Yongala years ago I was on a live-a-board. Unfortunately, the conditions were not good enough, so we hung around for two days in the hope things would improve.... 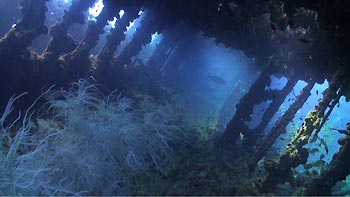 During the following years a few opportunities came up, but timing or adverse conditions had stood in the way.

And here we were in Far North Queensland, just South of Townsville.

Diving with Yongala Dive, based in Alva Beach, has a major advantage. It basically takes only half a day to do a double boat dive on the Yongala and you can do it all over again the next day.

For us the other advantage of being able to return to land means we can both dive the wreck and neither of us has to leave the other behind with our off-spring for too long. 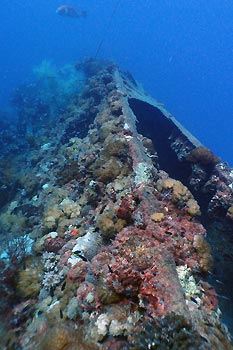 Yongala Dive has their own accommodation, which is a great option to meet other divers. To be honest there is not a lot in Alva Beach. There is a lot of sugar cane! Ayr is only about 17 kilometers away and here you can get most things you might need.

Just after arriving in Alva Beach we spoke to two guys who were washing their dive gear in the laundry and had just dived the wreck that afternoon and they said it had been amazing!

Since we are traveling with our two young children we generally cannot dive together and after drawing straws it was decided I had to wait a little longer. Envious I watched Tim put his camera together and pack his dive gear. But good things comes to those who wait......

The sun was out, hardly any wind to speak off and the ocean looked smooth. Before I knew it I was finally gearing up for what is essentially a wreck dive.

I’ll just put it out there: I am not a wreck diver. I don’t mind a bit of history, but I dive for the marine life. Scenery is good. If there happens to be a wreck in a dive site there is no doubt that it adds something to it all, but there has to be life. I am not tempted at all to dive dark, cold or deep waters just to see a wreck.

I have dived wrecks at Christmas Island, Maroubra and Lady Elliot Island  amongst others, but all of these were surrounded by reefs and were more part of the dive site, not a sole destination. 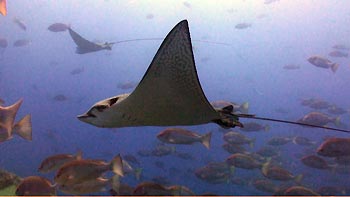 This is different for the SS Yongala. It is the only thing there! However, I must admit it is not the same as diving the J-class subs or going for the Coolidge in Vanuatu. The Yongala functions more as a fish attracting device. A beautiful little habitat that is definitely worthwhile making the trip to Alva Beach for.

I won’t go into the historic details of this wreck as those can be easily found out, although it did peek my interest for some morbid reason that all aboard died when the Yongala sunk. An underwater graveyard that is now offering a safe place for marine life. That is almost poetry and I know how much you divers love poetry.

In any case, my gear was put on-board the rigid hull inflatable at the shop not too crazily early one morning* and I got into my wetsuit. After the dive brief we were then taken to the beach where we climbed aboard. 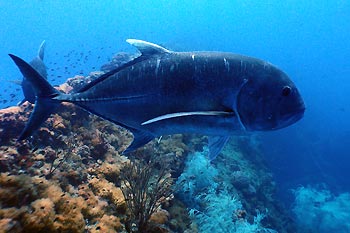 The boat was quite wide and there was a comfortable couch-like bench at the end making sure the drive out is really comfy. It took us only 30 minutes, although the staff boasted that they have done it in 18.

I would be surprised to hear surface conditions weren’t near perfect that day. We had a smooth ride with some Humpback Whales frolicking on the surface on the the way there. 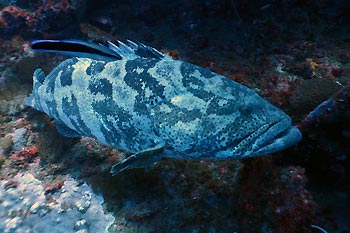 Cyclone Yasi came through the region in 2011. Besides a lot of destruction on land it has affected the growth on the wreck too. If you look at the photos and videos before this all happened you can tell. If you have dived the wreck before you’d notice. However, I am not sure how it has impacted on the fish life as that just seemed so rich and diverse.

You could see small soft coral trees making their way back onto the wreck and it would be interesting to find out when the growth will have returned to its former glory.

The size of the Giant Trevallies was amazing and you wouldn’t just see one big fella, there would be many. And they all seemed fairly relaxed about us being there.

Most things here are big and it is definitely a wide-angle kind of dive. The wreck itself, the windows and the open cargo holds are great back drops to photograph the life and the whole ambience. 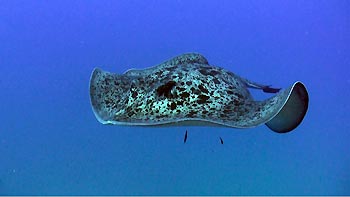 As I was gazing at a relatively small Flowery Cod through openings on the deck of the wreck I apparently missed the two sharks that swam past - a Tawny Nurse Shark and a Dusky Whaler.

Barracudas and  schools of other fish hung just besides the wreck in the very slight current, only moving slightly out of my way when collision seemed imminent.

We got to see a number of different rays such as Eaglerays, bull rays and cowtail rays. According to the staff they have seen a few species they have not been able to identify as well. At some stage an Olive Seasnake twirled past to get some air. 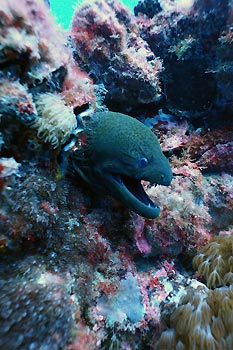 Besides all these there are some smaller reef fish closer to the wreck which seemed to be very relaxed. For example, a Six -banded Angelfish let me come very close - I am not used to this as they are normally so shy.

We could hear the Humpback Whales singing loud and clear! The breaching that was apparently going on on the surface at a fair distance could be heard like loud thuds in the background.

My guide pointed out a small Giant Moray Eel which lives near the stern of the wreck on the first dive and I made a mental note to come back to that one on my second dive to photograph.

After a lovely morning tea with wraps and fresh fruit we were all keen to get back down there.

At the end of my second dive myself and my buddy were by ourselves on the wreck with 10 minutes till deco and enough air to do our two safety stops. It was kind of eerie being there - alone with the big cods and the large bull rays hanging in the current, but also very nice and serene.

I was slightly disappointed that the sharks did not make a return even though I kept a real good look out. 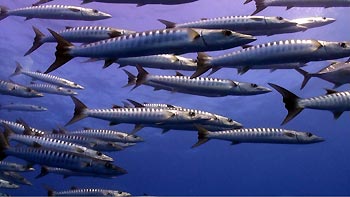 On our way up a large school of barracudas moved in. As we ascended they moved closer and closer to the Yongala as to remind us that the wreck is theirs now.

As I am writing this I realise that there actually wasn’t anything I hadn’t seen before but it all felt so open, so large, so isolated and different from everything else and nothing like I had expected it to be - I was excited and in awe the entire duration of both dives and I can’t wait for the next opportunity to do it all over again.