A Day at Lady Musgrave Island 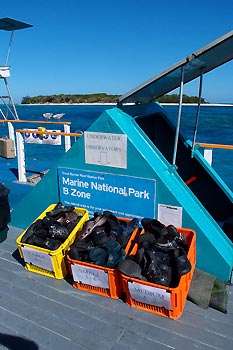 The rain never seemed to end in Seventeen-Seventy and the rest of the Australian East Coast. We were hoping to make a trip to Lady Musgrave for days, but the weather just was not cooperating. Then, almost unexpectedly - even though we had been checking the radar hourly, the sun came out and that Saturday we got up and organised ourselves for an eight oclock check-in to catch the Spirit of 1770 run by Lady Musgrave Cruises across.

Lady Musgrave is the most southern coral cay of the Great Barrier Reef and located just over 60 km of the coast of Seventeen-Seventy from where daily cruises leave.

The cay is a sanctuary for nesting Green and to a lesser extend Loggerhead Turtles and plenty of nesting seabirds over the summer. Except for a basic campsite with toilets there are no other options to stay overnight. 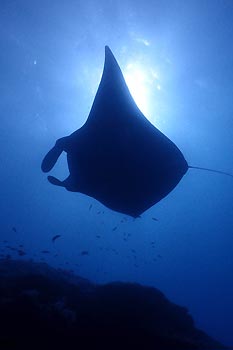 We woud be visiting Lady Musgrave Island just for the day. Although the sun was shining nicely, there was also a fairly strong southeasterly blowing, which we noticed as soon as we left Bustard Bay. Fortunately, the staff on board were extremely helpful, attentive and very friendly.

After about 2 hours we arrived at the pontoon, which is moored in the lagoon where the water was calmer. The pontoon was smaller than we expected but was sufficient for our day out on the reef. People could choose to go on a guided island tour, the semi-submersible, a snorkel or dive the outer reef wall in the morning. In the afternoon, a fishing trip or a lagoon dive was offered as well.

Unfortunately, our children could not yet swim unassisted and to go for a snorkel was not an option. However, we enjoyed the island trip, semi-submersible tour and the visited the Underwater Observatory in between morning tea, lunch and afternoon tea.

Tim went for a dive on the outer reef wall, whilst myself and our two children (4 years and 20 months) were visiting the actual island with one of the staff members giving us a guided tour. A glass-bottom boat brought us ashore, giving us the opportunity to have a quick look at the reef below. Some might have considered me having drawn the short straw, however, I enjoyed soaking up the sun and having a look around the sandy cay, imagining what it would be like to spend a few nights here - Robinson Crusoe style. 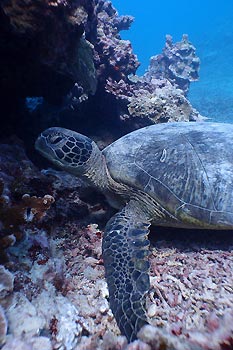 During the walk on the beach we were told about the turtles nesting and shown some left-behind egg shells. As both Green and Loggerhead Turtles nest on the island it is extremely important people who camp during the nesting and hatching times need to adhere to strict rules regarding lighting.

As I was trying to catch up with the group while dealing with a 20 month old constantly wanting to walk the opposite way we were going I suddenly saw everybody huddling around my four year old holding a cone shell!  Before you award me the Bad Mother of the Year: the guide actually had given him the empty cone shell to show everybody what they should be looking out for (and not pick up!). Phew!
We then entered the Pisonia forest and looked at other fauna including the Octopus Bush and were shown the basic camp grounds. 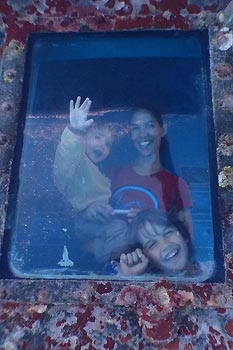 Tim had a great time diving the outer reef wall, watching all the fish there and spent some time with Green Turtles and a Manta Ray.  All diving is actually organised by Bundaberg Aqua Scuba. Besides the dive guides they also organise the Introductory Dives for people who would like to give SCUBA a go.

On our return from Lady Musgrave we had a light lunch and joined in on the semi-submersible, while Tim did the lagoon dive.

The lagoon dive was a fairly shallow dive with as expected lower visibility (7 meters max) than the outer reef wall. Still, a pretty dive with nice coral gardens, but no larger life.

For me, after the semi-submarine ride the children pretty much had enough and that was fortunately timed well with the program just coming to an end. We quickly went down to the Underwater Observatory so we could see Tim come back from his lagoon dive.

We had a great day out at Lady Musgrave, and watching the sun set as we sailed back was a glorious end to our day.