We had traveled up the Queensland Coast and after we had passed Brisbane there were no real big cities we stopped at. So when we finally reached Cairns it felt like a big city to us. Not in a smoggy kind of way, but more like: ”Oh wow, there are several locations with a supermarket and they have a BigW” kind of thing. We even started hoping we would be able to find a decent coffee for less than $5. 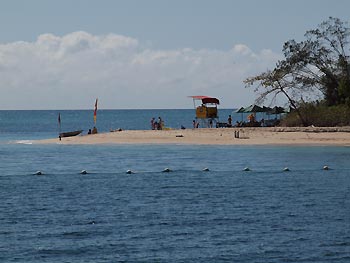 There were a few reasons to stop in Cairns and one of them was that Tim was going out on Mike Ball’s Spoilsport. Another reason was that the Cairns Underwater Film Festival was on as well.

There is - fortunately - plenty to do when you are in Cairns as a tourist and/or a mum with two children. One of the options is to visit Green Island.

”Mummy, why is this island called Green Island?”
“Well, err - because there are a lot of trees and bushes on the island.” That seemed plausible enough.
As I found out when I was watching the info video onboard it was actually because James Cook named it after the astronomer onboard, Charles Green..... I have not yet confessed this to our four year old though!

Green Island is situated just under 30 km off the shore from Cairns. If you are expecting a quiet, remote island experience Green Island is not it as it is a popular destination for day visitors from Cairns to go snorkeling or diving, but it is a great way to experience some of what the Great Barrier Reef has to offer. 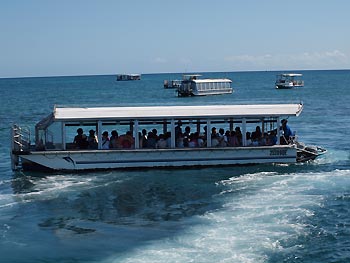 Other activities include a tour on a glass bottom boat, a self-guided walk through the national park or just spending some time on the beach of a beautiful cay. At an additional cost you can visit  Marineland Melanesia that houses ‘Cassius’ - apparently the largest crocodile in the world held in captivity.
If you want you can also book into one of the rooms of the Green Island Resort and spend one or more nights there.

On the morning of our departure we were picked up from our caravan park by bus, which after picking up several other people took us to the Cairns Marina. After check-in we pretty much straight-away boarded the Great Adventures boat that would take us across.

The friendly staff was very efficient in making sure things were running smoothly and although it looked like a busy affair they had time for a chat to make sure we were comfortable.

The trip was only 50 minutes during which a staff member came to see us and let us know what time we could go on the glass-bottom boat and what time we had to be back at the jetty for our return to Cairns. 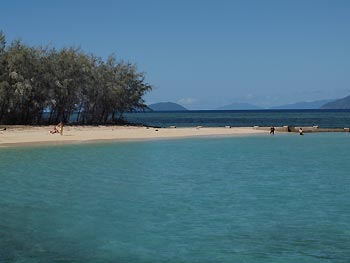 To be honest as a diver I was a little aloof about the glass bottom boat, but I thought the kids would love it. And they did! And I did too.... there was plenty to see and the 20 minutes went by fast. Batfish followed the boat pretty much the entire way. The skipper gave a tour on what we were seeing and the biology of the corals and some of the life we saw. There were a lot of the usual suspect such as the Neon Chromis, Sergeant Majors, parrotfish and a Coral Trout, but we also saw remoras and Giant Trevallies. This was not entirely natural though as the skipper did explain that they feed the fish during the day.

We were also lucky to see three Green Turtles come up for air.

After the glass bottom boat we had some lunch and the by now mandatory ice-cream and it was already time to head back as we only had half a day on the island.

Having visited the island I would recommend to stay a full day so there is plenty of time to do the glass-bottom boat, go for a proper swim and/or snorkel, walk through the National Park or circumnavigate the cay. At least that is what we’ll do the next time....