As a child I had heard about the Bungle Bungle Range. Even though I lived far, far away in the relatively cold and 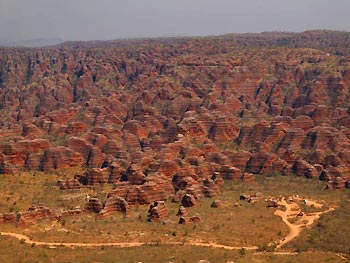 wet Netherlands I was aware they were somewhere in Australia. However, at that stage this was all a pretty abstract concept to me.

Even when we started planning our trip around Australia, the Purnululu National Park - where the characteristic striped domes are located - seemed so remote that I was not sure if we would be able to see them for ourselves.

Once we reached the Kimberleys in the north of Western Australia we realised that a big deterrent for us was the heat, rather than the remoteness.
The 53 km of unsealed road to get you to the entrance of the Purnululu National Park from the highway is corrugated and pretty rough, so we were not even sure if we could take in our off-road caravan, which would complicate things.

Looking at alternatives we came across organised tours and flights.

We ended up umming and arring whether or not we should go on a helicopter flight. The cost was not insignificant, but we would be able to see a lot from a great perspective. In the end we decided on a helicopter flight from Warmun (Turkey Creek).  Max thought the best thing was that the helicopter might not have any doors, a detail that was not a particular must for me - I must admit. 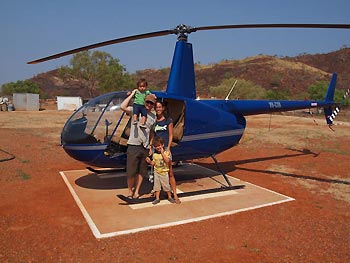 Because we were staying in Kununnurra the night before our flight we had get up early to make it there by 8.45 am. Organising the family and packing up our pop-up and -out caravan went remarkably easy and we were well on our way by 6 am.

In just over 2 hours we have made our way to Warmun (Turkey Creek) where SlingAir has its base.  Already it is pretty hot and there are only a few places with shade.

We parked the car at the road house next door, had a few snacks and something to drink while we watched a large bull leisurely walk through the petrol station and the caravan park behind it and waited for the helicopter to return from its previous flight

Even at that stage I still felt a little apprehensive as it feels like such a lazy, über-touristy thing to do. Not walking there, but flying over it.

In any case, we are there and the booking has been made, so there is no way back and we are all very much looking forward to it. Marty, our pilot, decides to put on the doors in back where myself and the two kids will be sitting.  Thank you! Very quickly we are making our way to the helicopter and I can see the excitement on Max’s face... 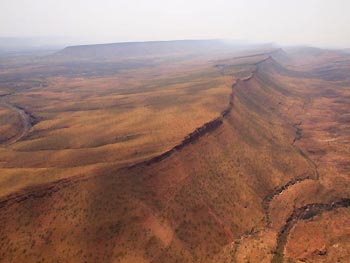 All five of us fit comfortably in the chopper and after taking a few photos and some standard radio calls and checks we go up into the air and make our way past the Osmond Range.

While we are making our way across to the Purnululu National Park at about 3000 feet Marty points out roads, creeks and other features below and talks about the National Park, the history of how and when it became inscribed on the World Heritage list (2003) and its stunning surrounds.

Creeks snake their way through the landscape. I try to spot kangaroos or other animals, but do not see any. In the distance we can see smoke drift up into the sky...

On our way from Warmun to the National Park you can clearly see geological forces at work with tectonic plates pushing into each other creating fantastic looking sloped rock formations.

The helicopter is nice and cool, but you can imagine the heat down below. As we get to the entrance of the 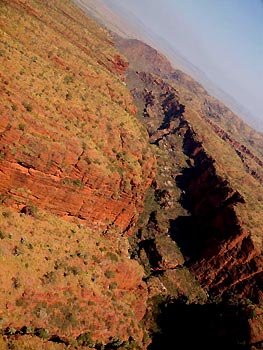 National Park, we see some cars and people below getting ready for or maybe already returning from their walks.

We get to see the Purnululu from a height of 500 feet., which means we can clearly see the trees, cliffs and rocks on the ground.

I initially thought that the main sight to see would be the striped beehive rock formations that make this national park so famous. However, the amazing gorges such as the deepest one at 280 meters, Picanniny Gorge, are a highlight in their own right. Marty points out the Livingstone palms, which are unique to this area, that have found their niche low in the gorges where they are sheltered from strong winds. He also mentions that there are 300 different species of mammals and 130 species of birds living here - a few of which are unique to the area.

The actual Bungle Bungle Range is magnificent. The stripes can be clearly seen and again Marty tells us all about the formation and how fragile these formations actually are as they are mere sandstone, which is easily eroded by wind and water.

On the way back we can see the two Aboriginal settlements in the distance and Marty indicates that further to the North there are some rock paintings that we won’t be able to look at as the local indigenous people have asked them not to fly past. 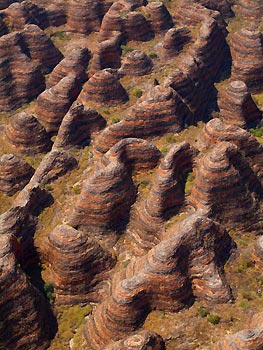 As I glance at our two children I notice that our 22-month old is deep asleep and Max is still fascinated with the technical aspects of our flight. At that very moment he is trying to undo several screws and nonchalantly plays with the door handle!!!

We can tell that to properly appreciate the area you would need at least a couple of days  if not a few more of hiking and camping to explore the different tracks. It would be fantastic though to be down there and experience the smells, the heat and immerse yourself in the landscape. Maybe May or June the next time....

The flight was amazing and in the end I thought that doing both would be the perfect combination. The flight offers such an incredibly beautiful perspective, as if stepping back from a great piece of art.

In the days that follow we find out that Purnululu National Park is closed and flights cancelled the day after our flight as bush fires go through the area and burn  260,000 hectares. This eases my feelings of regret completely because in the end we would not have seen anything other than the road in (and out).