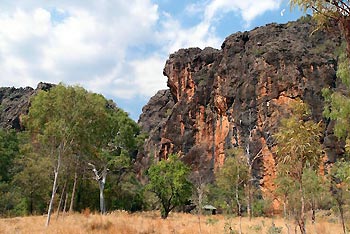 At about 7.30 am one morning we left Fitzroy Crossing in Western Australia and drove towards Tunnel Creek. It was going to be almost 45 km to the turn off and then ~80 km of unsealed road to get there. The reports we had gotten from different people on the road conditions were all different! We figured that it probably depends on how you travel, what you are used to and when you travelled there last...

We thought the unsealed bit wasn’t too bad, but there was plenty of corrugation and the possibility of cutting tires on some sharp rocks. In any case we took it easy, especially since we were towing our caravan with the plan that after Tunnel Creek we would visit Windjana Gorge and stay the night there. 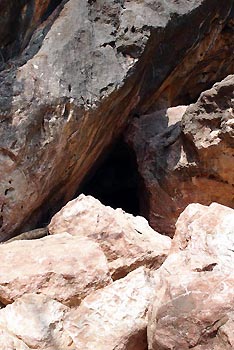 Once on the car park Max and Tim put on their boardies and the three of us put on our booties/sand shoes. Zac, our 22 month old would be in the ergo, carried on my back. We had our three torches ready too and we started walking towards the information sign and the entrance to the tunnel.

The limestone rock of the Napier Range in the Kimberleys, Western Australia was formed by an ancient reef system. Tunnel Creek was formed when water worked its way through a limestone rock face part of an ancient reef system and hollowed it out over time. At some stage the roof collapsed essentially dividing the tunnel in three parts. All up the tunnel is 750 meter long. Torch and (sand)shoes are a necessity.

How exciting! The entrance made it all look very adventurous as we sort of had to climb over and under rocks. Of course I misjudged the height of a rock once and poor Zac bumped his head - or I guess, I bumped his head.  We entered a kind of pre-chamber with a high ceiling and light coming in from the side. This was already a beautiful sight.

A woman and her daughter were sitting there waiting for the dad and three other kids to return from their walk. The dad and three kids only had one torch and the kids were bare foot!!! So how hard could it be? They mentioned that they had seen a Freshwater Crocodile, but no details on where or how close they got and I quickly forgot about it once we entered the dark. 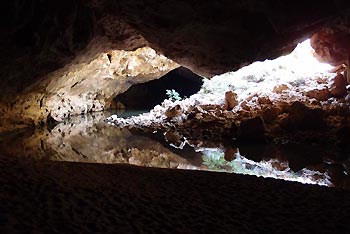 The first cave wasn’t too difficult and not really deep water, but dark. It was quite interesting wading through water with only a torch to light what is immediately in front of you - a bit like a night dive. Rocks under the water made sure we had to walk a little slow to make sure we didn’t stumble. As it turned out Tim had the best torch. Mine was okay and Max’s was not useful at all other than that we were able to see where he was as long as he had it on. Most of the time he was very close holding onto one of us. We saw a few little fish and the occasional freshwater shrimp swimming away from our lights. Stalactites hung from above and the whole ambience was just amazing.

The bottom was mainly soft and sandy and we walked in and out of the water. 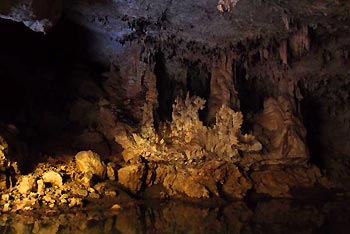 When we came out the first bit we met some people who told us that in the second cave there was a bat colony right at the beginning. Not a chance we would have missed them as they were pretty vocal. Their eyes reflected our torchlight as they checked us out. They were probably the Little Red Fruit Bats. They looked dark in colour, almost black and hung separately. There were about one hundred hanging up side down. Of course Max wanted to know why they were hanging and why they only came out at night. And did they eat a lot of carrots so they could see in the dark?

Tim spotted a second bat colony a bit further down, but those bats were all huddled together and looked grayish pink and much smaller than the previous one. We think they might have been Common Bent-wing Bats, but we didn’t want to put our torches on them for too long in case we were disturbing them. 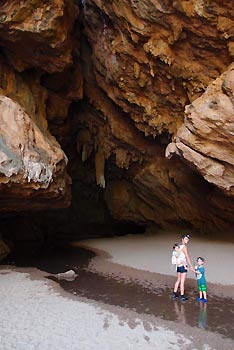 At one stage I saw some other eyes in the dark a bit further down, but didn’t give it much thought. When we were almost at the end we waded through water that was about hip height for us and almost up to Max’s neck. He wasn’t too impressed, but of course pushed through.

Again I saw my torch light reflected, but because there was no blinking I didn’t think it could be an animal eye...until I saw them disappear under water! A freshie. I knew they are generally not dangerous, but I must admit that in the dark when you can’t see much this didn’t help much to ease my nerves and I quickened my step to the end of the tunnel and out of the water.

Of course we had to go back, but fortunately, we found a less deep path. I must say that again I walked as fast as I could. However, further down we saw another two, but they stayed nicely on the other side of the cave with their eyes above the water. Then almost at the end there were another three, which probably had been sitting there all along, minding their own business.

All up it had taken us an hour to get through and back. Once outside we noticed how hot it was outside and how nice and relatively cool it had been in the tunnel. We quickly changed into dry gear and got into the car to visit Windjana Gorge.

We really enjoyed this little walk and I would recommend it to anybody. You don’t have to be particularly fit, but be able to climb and negotiate the wading through the water. I would do it again if the opportunity arose.