As I entered the water with a giant stride, the cool water trickled down my back. Normally this would bother me, but after walking down the whole of Busselton Jetty with a trolley filled with my dive gear in it was a welcome reprieve…. 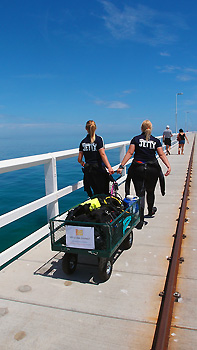 Busselton Jetty had been one of those dive sites that had been on my wish list for a very long time. Living on the East Coast, I had to wait for the opportunity and hope that conditions were favourable to go for a dive there when that happened. Lucky for me, when the time had come, I woke up to a clear sky with only a few thin clouds streaking the blue. The water's surface was oily, smooth and clear. Perfect! 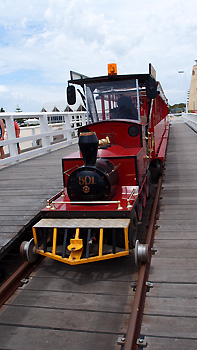 Busselton is a very nice township located just over 200 km south-west of Perth in Western Australia. The wineries and breweries of the Margaret River area are not too far away and while you are there you can dive  the HMAS Swan from Dunsborough as well.

The Jetty itself was built in 1865 and has been extended over time until it reached its current length in the 1960s of 1.8 kilometres. In 2011 the jetty reopened to the public after a $27.1 million refurbishment.

You can walk down the jetty for a small fee or you can take the little train to the very end and visit the Busselton Underwater Observatory located at the very end.

'The Dive Shed' is currenty the only operator who will guide people on a dive there. Normally when you go there they will take you to the end by boat. However, as it was just me and one other person going out it was decided we might as well go for a stroll.

As we made our way to the end of the jetty we could clearly see a couple of Eaglerays and a Fiddler Ray. I just got more and more excited - and, admittedly, also a little hot. As they have identified over 300 species of marine life here any dive would be a treat.Once we hit the water I descended in clear water with about 12 meters visibility, maybe a little less at the end of the jetty.

The first impression was the amazing colourful growth covering the pylons: Telesto soft coral coloured by its orange encrusting sponge, bryzoans, sponges and different colonial ascidians grow on the pylons offering shelter for nudibranchs, clingfish, blennies and decorator crabs. Without even trying hard I found a few Ceratosoma brevicaudatum. 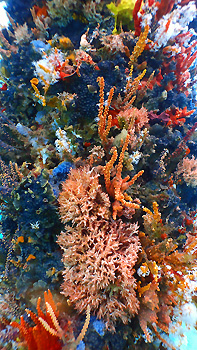 One of the first fish I saw was an Ornate Cowfish. Excited, I aimed my camera. Then immediately after I saw another one, and another…. They all seemed to hang out in this particular area and I didn't see any after I moved along. Although those fish are no fast swimmers by any means, they managed to duck underneath and around everything making it a challenge to try to get them on camera looking glamorous!

A similar thing happened a bit further along when I came across a number of Globefish. As long as I kept still they would just hover around the pylons.

Although the number of fish was not overwhelming and larger schools were missing on this particular day, seeing all the different fish species was very impressive. It included some species I had become to see as the usual suspects like the Black-headed Puller, large Old Wifes, Bullseyes and a few leatherjackets, but there were plenty that I had not seen before. 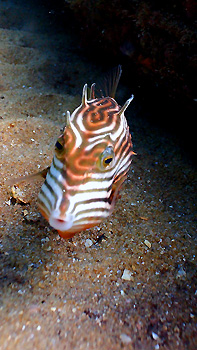 When we reached the end of the jetty we saw small schools of herring and Tailor. Dusky Morwongs were hanging close to pylons only slightly shifting if you paid them too much attention.

As we moved away a little from the jetty to avoid the observatory we moved over a field of seagrass. I would have loved to investigate those areas a little longer and see what animals were hiding there. A quick look revealed some Wavy Grubfish, but I am sure plenty of other critters would be hiding in there.

The hour long dive just was not long enough as I had a wonderful time! I could have done another dive straight after and maybe concentrate on the individual pylons to find the critters that were hiding there or go back to the seagrass and look out for some rays. It was an absolutely relaxed dive and I hit the surface on a high!

The following day I paid a visit to the Underwater Observatory at the end of the jetty with the family. The wind was picking up again and the skies were overcast.

Without having to enter the water we could all enjoy the underwater views and learn about the jetty and the observatory itself. A flat worm and a nudibranch were stuck to the window and we saw fish I had not seen on the dive. A real feat in engineering, the Observatory was opened in December 2003 and gives the visitors the opportunity to 'descend' 8 meters below the water's surface. 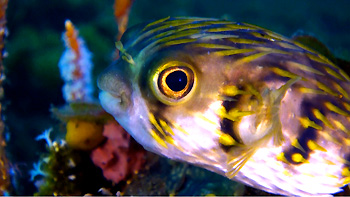 Another walk on the jetty became compulsory when the winds were too strong for the little train to drive. I did see some people being taken across on the back on one of those electric golf carts, but didn't dare to ask!

As both the jetty train and the Underwater Observatory are both a very popular tourist activity it is wise to book the train/observatory ticket ahead. Only 50 people fit on the train and 41 people are allowed in the Observatory at the same time.

When I asked 'The Dive Shed' staff if they only ever dived the jetty, they straight away decided I should come along on some diving at 4 Mile Ridge a few days later. 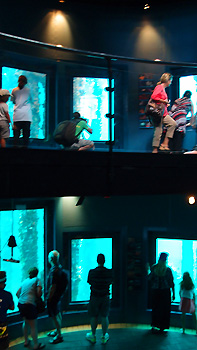 Four Mile Ridge is shaped by a two meter underwater fracture. The dives here are shallow, which means a lot of natural light making it really relaxed  as you do not have to worry about air consumption or deco times.

We did a double dive there and I was treated to a lot of Chromodoris annae. Although this nudibranch is obviously a very common one in this neck of the woods, I enjoyed seeing every one of them!
One of the sites was named 'Bullseye', but I reckon it might as well be called 'Blue Devil' as I saw at least a dozen of these fish. They are just beautiful. Although initially shy if you have the patience and hang out to see how they move and react to your presence you can get really close to them.

The other site 'Coral Garden' offered a different kind of seascape including a bommie made up out of cabbage coral and other hard corals where a load of fish were hanging out.

I had another wonderful morning, enjoyed every minute and can recommend doing some extra diving when you find yourself Busselton, Western Australia.