Thousands of divers will be hitting the water September 2011 for the first Australasia-wide Underwater Festival and Australia has hundreds of visually stunning locations on offer. 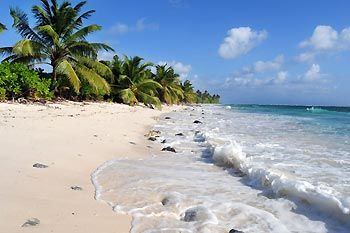 Cocos Keeling is a widely unknown tropical island paradise but thanks its hosting of an UF11 Fringe Event it is about to be added to the holiday wish list of many of the region’s divers.The 29-island atoll may only be a four-hour flight from Perth, but it feels a world away from the hustle and bustle of the mainland.

Not to be confused with Costa Rica’s hammerhead mecca, this isolated coral atoll in the Indian Ocean offers pristine diving where you never share a dive site with more than a handful of other divers and has its own unique mix of underwater sights, from WWII ship and plane wrecks to expansive coral gardens, one of the world’s few remaining healthy shark populations and even a lonely dugong.

I spent most of my time on West Island and its laid back atmosphere even makes nearby Christmas Island seem crowded and busy. And where Christmas Island is a steep volcanic mount, Cocos Keeling is whisps of palm tree-covered sand lying mere metres above sea level. 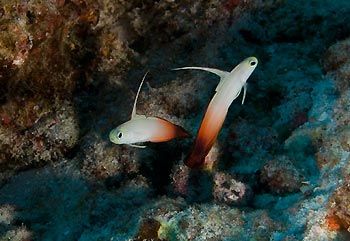 There was no need for keys to my well appointed room at Cocos Seaview and after a quick driving tour of the island my hosts Ray and Sue Marshall invite me down to the “yacht club” - a beachside shed with a few small catamarans and picnic tables outside of it - for sunset drinks and nibbles. Then it was off to dinner at West Island’s one restaurant, Tropica, and the obligatory drink at the pub, conveniently located next to the airport and the centre of the island’s socialising.

My first day on the water with Cocos Dive owner and captain Dieter Gerhard is a magical day, and after a swell moves in it turns out to be the best of my three days of diving on Cocos Keeling. We’re only part way across the lagoon when a pod of bottlenose dolphins appear under the boat’s bow, begging us to throw on the snorkel gear and slide in the water for a play. After a few minutes of dolphin bliss we jump back in the boat and Dieter rewards the pod with a speedy zig zag across the shallow lagoon. 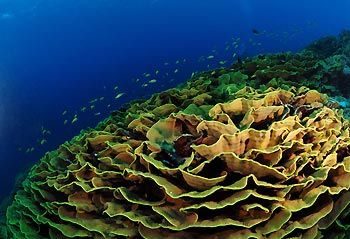 As we near Horsbrough Island and the coral bommie speckled sand gives way to coral reef the dolphins leave us and we backwards roll into the beauty of the Cabbage Patch. It appears as though there are acres of the green and yellow-fringed coral, which really does resemble fields of cabbage leaves.

One of the other two divers with us is Dr Suzanne Long from the Cairns-based Reef & Rainforest Research Centre. She’s looking for a data logger that has been collecting water temperature figures at Cabbage Patch for the past few years. After a cruisy swim along the cabbage gardens Suzanne and Dieter find the data logger, remove it and replace it with a new smaller and sleeker one. The information collected will be useful in determining if Cocos Keeling’s corals have been subjected to the gradual water temperature increases and damaging spikes that have bleached corals in other parts of the world.

For our surface interval we head over to the picturesque Direction Island, a popular camping spot for locals, for lunch, which includes Dieter’s fabulous home-made bread.

On our way out to the second dive eagle-eyed Dieter spots two manta rays. He doesn’t have to say another word; we’re already putting our snorkel gear on and readying our cameras. At first we see just two large, dark coloured mantas slowing circling a coral bommie. Then they head out across the sand to another nearby bommie, circle it a few times and head back to the first. They continue this circuit and soon two more mantas join them. I take some video and then simply float on the surface and watch the slow-motion dance. 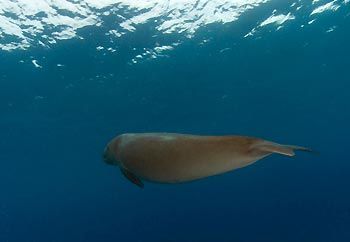 I could have happily stayed with the mantas but Dieter reminds us we have a date with a lonely dugong!
Kat is Cocos Keeling’s famous lonely dugong, which showed up inexplicably nine years ago and hasn’t been able to entice any females of making the move from northern Western Australia to join him.

As expected, it doesn’t take long for the bachelor, who was originally thought to be a female and thus given the typically feminine name Kat, to show up after Dieter anchors. Dieter has been away for six weeks and Kat has clearly missed the anchor rope, which he uses to scratch all of his hard to reach places. But Kat is in a cheeky mood today, and doesn’t let the divers get close.

After his scratch Kat disappears and we assume he’s left us to our dive, at a site called Gerhard’s Canons. But as we explore the reefs surrounding the old canons we keep hearing a whistling sound.It’s not high pitched enough to be the dolphins. It’s Kat, teasing us by letting us know he’s keeping tabs on us but staying out of sight, which is especially frustrating for us photographers. Back on the boat Dieter explains Kat’s various moods. Sometimes he’s playful and he loves kids, He lets children get the closest to him, but other times he’s in no mood for company and leaves the anchor rope as soon as divers enter the water. Other times he uses the divers for his own entertainment, shadowing a group and reveling in the fact none of them know he’s there.
Dieter has even seen Kat careening around the slow moving manta rays, like a kid on a supped up BMX bike doing donuts. 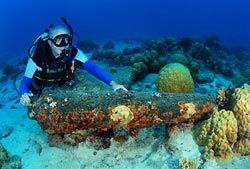 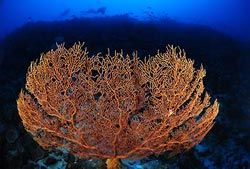 Despite the bit of swell my other dives are also enjoyable. The orange-red gorgonians at 35metres at Cologne Gardens were a particular photographic treat and at Ripper, Cable Bommie and Prison Gardens quite a few grey, black and white tipped reef sharks came in for a good look at us.

Another treat was the scattered wreckage of a Catalina JX435 flying boat. Despite the plane breaking into quite a few pieces on impact, there are two sets of intact propellers still attached to their motors. The props lie in just six metres of water and make a good dive or snorkel, with small black tipped reef sharks coming in to see what the bubble blowers are up to. 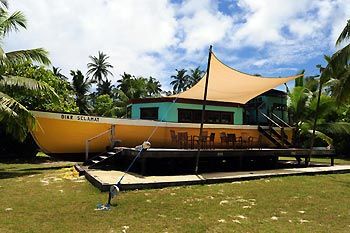 While Cocos Keeling sounds and is a sleepy tropical island, there are plenty of land-based activities to keep you busy on your final no-fly day.

Kylie and Ashleigh’s motorised canoe tours of the southern part of the lagoon are a fun afternoon out on the water. The tour includes snorkeling, a quick hike to the highest point of the islands on South Island and drinks (beer, wine, soda) and food.

“Ossie” Osmond Macrae’s tours of Home Island, where the Cocos Malay population lives, is another fascinating afternoon out. After taking the ferry across the lagoon Ossie shows you the sights in his fleet of 4WD buggies, introduces you to some talented locals and shares the islands’ history as a coconut plantation run by several generations of the Clunies-Ross family. The Wednesday afternoon tour includes dinner and midday tours can be arranged on other days. 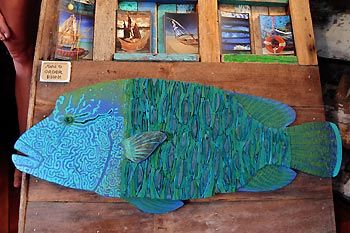 My lunch with Ossie included decadent coconut oil fried bananas, easily the best food I had while in Cocos, and fresh coconut milk.

Back on West Island there is The Big Barge Art Centre, run by motivated young local artist Emma Washer.
Washer and her father spent nine years, off and on, moving and restoring a barge, one of the old ferries, which was left to rot in the forest near Trannies Beach. The barge is now an air-conditioned gallery, full of the work from nine local artists including Emma, who also runs art workshops for the locals and plans to set up art retreats for visitors next year. Among the most intriguing items in the barge are Emma’s pieces made from the weathered thongs that wash up on Cocos Keeling’s beaches in their thousands. If I wasn’t already over my baggage allowance I would have bought one of Emma’s life-size napoleon wrasses, which she makes from thongs and painted wood. 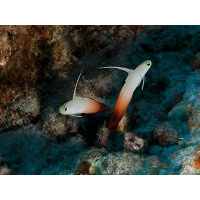