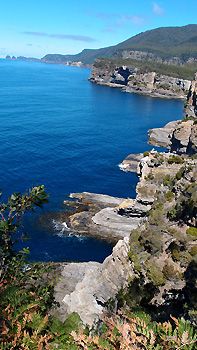 Tasmania - the last frontier. At least that how this island south of the Australian mainland  with its rugged beauty, stunning beaches and difficult to explore wilderness felt to us. Jagged rocky cliffs towering high above the water, seemingly insurmountable, visible from the numerous look-outs and of course the water. Known for its rich convict history, impressive cliff faces and incredible vistas blew us - by now seasoned travellers - out off the water!

We left the mainland of Australia, expecting to spend a couple of weeks in Tasmania. How wrong were we!  Blessed with 5 weeks of beautiful summer weather we had the great opportunity to enjoy every place we visited and make the very most of it. And we did!

It was impossible not to feel impressed by Port Arthur and other historical sites and learning more about convict suffering - rightfully or not - and the start of white settlement and its impact.

We picked blackberries at the side of the roads and we managed to fit in countless walks, our by then 5-year old bravely marching alongside. His 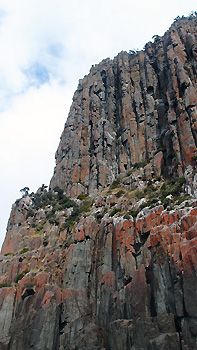 brother was comfortably strapped to my back most of the time since he had the tendency to walk into the opposite direction. Combining this with our keen urge to explore the sub-surface terrain as well, our time here was an amazing experience.

Diving in the tropics is easy and comfortable, but that doesn't mean that diving in the cooler waters of Tasmania is not worth your while. There are several places where there are dive operators keen to show off Tasmania's underwater beauty.

Unfortunately, due to adverse diving conditions in Bicheno we weren't able to go diving there, but further South we were more than successful.

Next stop: the Tasman Peninsula. I was lucky that the staff at Eaglehawk Dive Centre know how to stay warm under water. They gave me a two piece, 7 mm suit, and an arctic vest with a hood and gloves. I could have organised some dive socks, but felt absolutely comfy even though the water was a mere 16oC.

Admittedly, we did not have a bright sunny day on the water, but that didn't matter for our first dive of the day at Cathedral Caves. This dive site is an extensive cave system at about 20 meters depth where the pounding waves have created cracks in the 100 meter plus high rock face. 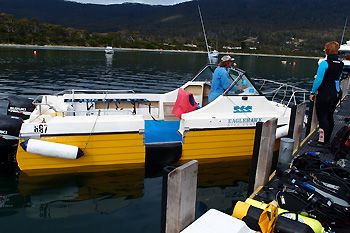 The boat was moored across the entrance of the small inlet and we entered the water, checking cameras and buoyancy. With us was Mick, who knows the caves like the back of his hand…. During the dive brief he gave us an overview where we would be going and most importantly that he would check our air at 4 different intervals to make sure we had enough for the following part.

I was mainly excited, although the video footage I had seen before we left did make me wonder how I'd go with squeezing through some of the swim-throughs. Then again,  I re-assured myself, I definitely wasn't the largest on the team!

The first main bit was called Skull Cave, which is not particularly boosting one's confidence. The reason it got its name though is because the three large openings that let some light in make it look like you look outward from a skull….pfew! I could hear the thundering waves above us crashing. 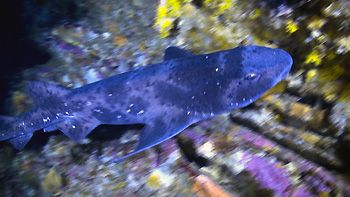 I loved it! Despite not having much time to look around I found a cuttlefish egg with a small hatchling inside it bumbling on the cave's floor, a tiny nudibranch and a sea spider all within one meter of each other. After quickly inspecting these I looked up and found there were no other lights to be seen ahead of me!!

Consciously I slowed my breathing and turned off my torch….nope, no other lights. I turned around as I was not the last in the group and fortunately, the dive master with extra tanks was right there… aaaah, a light bulb moment - excuse the pun - there was supposed to be a bend in the tunnel we were swimming through. Soon enough I found the turn to the right and there was everybody…. I got a bit of a slap on the wrist when we returned to the surface for not keeping up!

At the end of the dive we found a male Weedy Seadragon with eggs attached to its tail.

On the second dive we were going to explore the remains of what was once extensive kelp forest. These kelp forest are made up from Giant Kelp (Macrocystis pyrifera), which can grow between 30 - 50 cm in a single day under optimum conditions and individual plants can reach a length of 50 meters. 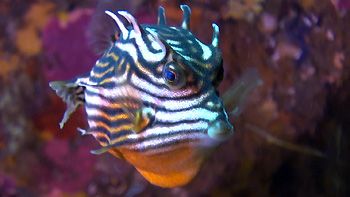 Its 'pneumocysts' are a popular subject for underwater photographers. These gas-filled bulbs enable the kelp to float near the surface and optimise the photosynthesis used to produce the energy needed for reproduction and growth. Besides light the Giant Kelp also needs water that is high in nutrients and not too high water temperatures in order to grow and reproduce successfully.

Over-harvesting by humans, water low in nutrients and a significant rise in the ocean 's temperature have all contributed to the decline of the Giant Kelp forests. The few patches still here are thinning out and dying off at the moment. 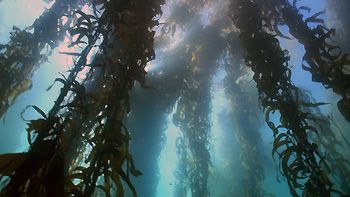 For some reason the east coast of Tasmania has a larger increase in the water temperature that anywhere else: 1.5oC since the 60's. Giant Kelp needs cool enough water to be able to effectively regenerate and grow. In addition sea urchins, who eat the kelp, are present in larger numbers helped by the fact that the water temperatures are more favourable to them AND the urchin's natural predator - the rock lobster - has been over fished. This combo, regrettably, results in a dying off of this amazing plant and the habitat it creates. 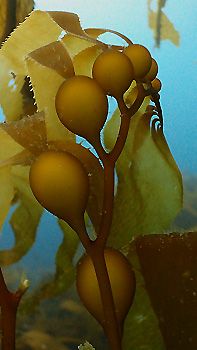 My buddy and I were on our own on this dive while the staff sat this one out. We just pottered around in a relatively small area, enjoying the light filtering through the canopy. Our maximum depth would have maybe been 12 meters. There were some shy Crimsonband Wrasse (Notolabrus gymnogenis) and Western Kelpfish (Chironemus georgianus) and Senator Wrasse (Pictilabrus laticlavius) flitting through the lower kelp not halting for long enough for me to get any decent shots. 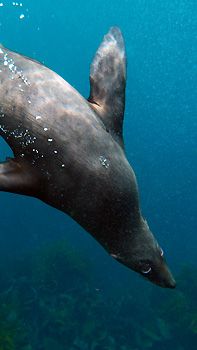 I enjoyed sinking into those lower kelp beds and looking for critters and different seaweeds/plants occasionally floating just above it to check on my buddy's whereabouts. Very relaxing!

On the way back, we had the amazing opportunity to snorkel and swim with some New Zealand Fur Seals. These playful animals entered the water as soon as we did. Again, I tried my very best to be as fast, elegant and agile as these puppies, but I blamed the buoyancy of my wet suit for my lack of grace. The cold was forgotten very quickly and too soon we had to make our way back to shore.

I must add that the boat ride in itself was incredible as the enormous cliffs tower high above the water's surface. Cracks in the cliffs, waves crashing onto boulders and rocks and this was a calm day! Rugged, rough, untameable… water spray, salty air. Pure Tasmania - it's true! 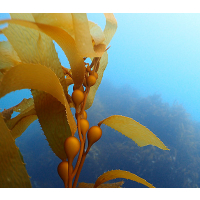