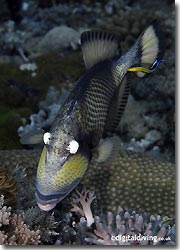 Most underwater photographers who have spent any time in the Indo Pacific have come across the very photogenic Titan Triggerfish. Most of us have heard the stories of Titan Triggerfish attacking divers, ramming and biting, and sometimes requiring medical attention. There is some irony in the fact that most non-divers (and unfortunately, many divers as well) have unwarranted fears about sharks or barracudas, but would more than likely approach a Titan Triggerfish without a second thought. 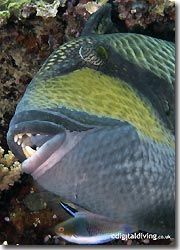 While not always aggressive and on the attack, these highly territorial fish are no joke and are to be taken seriously. So when we received an email from underwater photographer David Henshaw with images from a recent Trigger attack in The Philippines, we decided that it was important to make sure that all of our readers understood more about the Titan Triggerfish, and their behavior.

About The Titan Triggerfish

The Titan Triggerfish (scientific name - Balistoides viridescens) is the largest of the Triggerfish family, ranging from approximately 15 - 30 inches. Their bodies have patterns of green, yellow, purple and gray, with black fin tips. They are indeed very photogenic. Titans feed on hard coral, crustaceans and invertebrates, using a set of specialized teeth that are clearly designed for these food sources. The Titans have independently rotating eye sockets, but apparently have poor vision, possibly adding to their territorial nature.

Ordinarily you will encounter a solitary Titan. Like most reef fish, they are active during the day and will tuck themselves into the reef to sleep at night. Understanding their nesting behavior and territorial nature is important for minimizing problematic encounters. 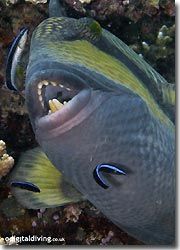 While it is commonly cited that Titans only attack while protecting their nests, this may not be true, as many incidents indicate aggression against territorial intruders even during non-nesting seasons. Titans nest in the sand adjacent to or within the corals. They will protect these nests with a rigor that is rarely seen from other species. The "danger zone" is a cone shaped area directly above the nest, all the way to the surface. So if you invade a Titan's nesting zone, which more often than not you will do unintentionally, and find yourself with an aggressive male chomping at your fins and ramming you, ascending will not stop the Titan from defending its turf. You must swim horizontally away from this zone. Try to keep your eyes on the Titan at all times, which is easier said than done, as these fish dart about in spurts of intense speed. Keep your camera or fins between you and the fish if at all possible. Better to have a hole or in fins than your body! Hardcore photographers would say to make sure you get the shot while evading attack, but we will be responsible and recommend focusing on not being harmed.

Birget "Biggs" Eggert, tells of her encounter on Apo Island:
"I was bitten by a Trigger which took 2x1 cm of my inner and outer lip muscle and nerves. Yes, absolutely crazy. He came out of nowhere without any warning in 15ft / 5 meters of water while I'm doing my safety stop... guess I must have been above his nest or he just does not like my face and bubbles."

Fortunately, Birget is ok. The wound was initially stitched up, but required two hours of plastic surgery afterwards. In good spirits she joked that after the plastic surgery "they fixed everything and I felt like Angelina Jolie except I'm still waiting for Brad Pitt to visit me"

Titans Are Not Evil

Not all Titans will attack to protect their territory. Often you will just be charged at aggressively and subsequently escorted out of the nesting zone by an agitated pit-bull with scales. And remember - you are not really being "attacked", the Titan is defending its territory, which you (unknowingly) invaded. Don't blame the Titan. 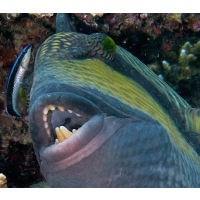