Ningaloo Reef - located about 1200 km north of Perth - is maybe most famous for the Whale Sharks encounters happening between March and July each year when those giant Elasmobranchs aggregate here. While the Whale Sharks are also the most advertised attraction of the reef, the Exmouth region has a lot more to offer.

For example, the diving and snorkelling on this 280 km long fringing reef outside the Whale Shark season is another great attraction and a must when you are visiting this part of Western Australia. 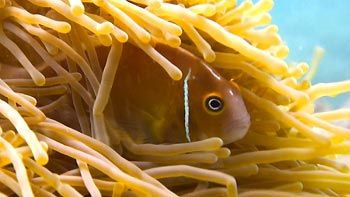 Australia can count itself lucky that amongst a whole long list of amazing natural features it also has two large coral reef systems, one on each side of the continent. However, instead of a barrier reef Ningaloo is a fringing reef with the main differences being that it is much closer to shore and therefore easier to access. And although Ningaloo is about a tenth of the size of the Great Barrier Reef it boasts a high bio-diversity and at the right time of the year there are almost guaranteed encounters with Whalesharks, Manta Rays and Humpback Whales (you can never guarantee anything as it is nature, but your chances are pretty good).  Dugongs too frequent the area, but are a rarer sight.

When you visit the Cape Range National Park you can access the reef from the beaches there - most famously at Turquoise Bay and the Oyster Stacks - by going for a snorkel. Black-tip Reefsharks, turtles and sometimes even Manta Rays swim right there.

From November Green and Loggerhead Turtles come ashore to lay their eggs, logically followed by the eggs hatching at the beginning of the year. Coral spawning can also be observed, mainly in late March or early April.

Having travelled across the wonderful Top End of Australia over the previous couple of months we were excited and a actually very relieved to be finally near the ocean again. Not that we left the red dust far behind as on this side the desert meets the reef in a most spectacular way: the red soil meeting the turquoise waters. 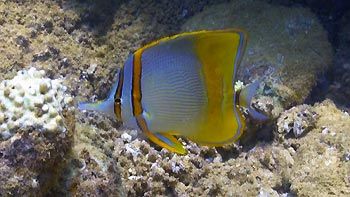 I was lucky enough to go for a day of diving with the Exmouth Diving Centre. Driving out to our first dive site on the Ningaloo Reef  there was a young Humpback Whale breaching; its whole body lifted out of the water several times. This whale reflected how happy I felt on the inside - although I doubt I'd be able to leap like that!

Further along we saw more Humpbacks, a few mothers and their calves too. The boat ride alone made it worth my while being out there. The sun was shining, a perfect temperature and I was on my way to dive Blizzard Range.

Although the name implies that visibility is generally low here, we were lucky with about 12 meters viz on the day. We followed a low ridge running for about 120 meters at 12 meters depth.

Several schools of fish, such as fusiliers, were hanging out on the sand and small groups of Bannerfish and Rabbitfish scooted along. There weren't a lot of corals to be seen, but the number of fish was great. They all seem to be as relaxed as I was and they happily let me get close. 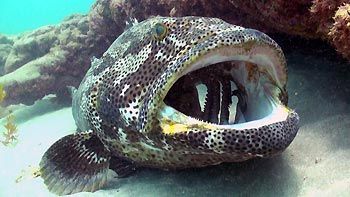 A Flowery Cod was lazily lying on the sand, being cleaned. Apparently this is where he likes to hang out and can be found most days.

Under an overhang some Slate Sweetlips were hanging out just above the sand. They looked like they weren't sure what to do with this diver having a look at them. The term 'eye-balling' must come from the way fish look at you, I thought. Their eyes quickly moving from me to the other fish and to the way out and back to me, their bodies not moving.

We also came across a few different nudibranchs such as the Chromodoris annae and Phyllidia elegans.

A bit away from the ledge on the sand I saw what I thought was a bright fluorescent orange bit of plastic amongst some floating kelp. This turned out to be a Nembrotha kubaryana. It was holding on while the kelp was dragged forth and back by the light swell, making it tricky to have a good look at it. Apparently this particular colour variation is typical for this species at Ningaloo Reef.

At one stage I was trying to photograph one of two Lionfish. After a while the Lionfish was getting a little impatient with me and fluttered its fins and spines  and as I backed off I almost got too close to a large Cowtail Ray resting underneath a ledge. I slowly turned around only to meet face to face with a large Olive Sea Snake, while a second one went up for air! Amazing, I was thrilled….

My favourite fish would have been the Threadfin Pearl Perch hanging out at different locations in small schools, their big eyes following my every move.

At the end of the dive I felt completely relaxed and I slowly drifted up to the surface.

While we were having morning tea the boat moved to the next dive location. 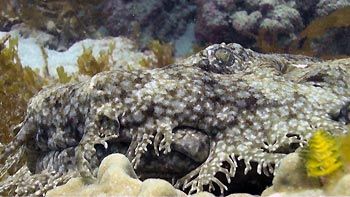 Our second dive was at the 'Labyrinth'. A great seascape formed as a kind of underwater arena with bommies scattered all around with a large table coral marking the 'entrance' to the dive site.

Under a ledge a Tassled Wobbegong was blending in nicely with its surrounds. A few White Tip Reef Sharks were cruising and I saw another two Olive Sea Snakes. Green turtles, I was very excited to see a Bornella anguilla feasting on some hydroids.

Around the coral outcrops the usual suspects were hanging out such as the Neon and Blue/Green Chromis and Black-tipped Fusiliers.

And all this with amazing Humpback songs in the background….

The sites mentioned above did not offer the colourful corals of the Great Barrier Reef - although 200 species of corals have been identified on Ningaloo Reef - but the fish life was very impressive. I enjoyed seeing several species I had not seen on the East Coast or anywhere else. As the dives were both pretty shallow it meant this were great sites to take photos and video as there is enough natural light, plenty of air and heaps to see. 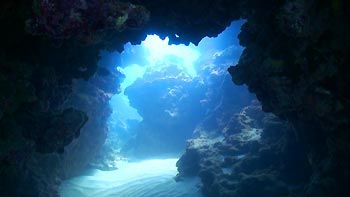 On the way back we had our lunch.There were fresh bread rolls with yummy toppings, cherry tomatoes, strawberries and other fresh fruit and plenty of it too.

I was also lucky that I had a great dive buddy. We seemed on the same page and took our time, both with similar air consumption which added to me being able to enjoy my diving.

Both of the dive sites are located in the Lighthouse Bay, but there are plenty of other dive sites when you are diving from Exmouth, including of course the West Coast and the Navy Pier.

Another interesting place to dive whilst in Exmouth are the Muiron Islands, which are located almost 20 km north east of Exmouth itself. Depending on where you dive there you get to see reefs with very healthy soft and hard corals and beautiful swim-throughs. 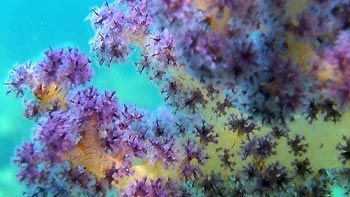 Plenty of wild life there as well and if you are lucky later in the year you might get to see some Manta Rays. Several different species of nudibranchs can be found here too, including different colour variations of Phyllidia ocellata.

All staff members at Exmouth Diving Centre we met were very professional and helpful. They made their job look so easy and relaxed. The other thing I noticed was that they did not automatically assume that the customers have just finished their Open Water Dive Course, but might actually have some experience too. At the same time the divers on the boat who needed more assistance did not even have to ask and they were looked after very well too. 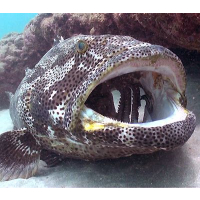