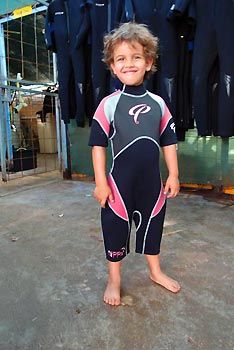 On the 11th of October the Exmouth Diving Centre was going out on one of their Eco-tours: a full day adventure with snorkelling on Ningaloo Reef.

A spotter plane would be used to locate Manta Rays, Humpback Whales an potentially some late, late, late Whale Sharks. Normally those gentle giants aggregate at Ningaloo from April until late June, but just the previous week Whalesharks had been sighted by some lucky punters who also got to swim with two of them.

Initially I was't sure whether it was a good idea to take Max - my 4 year old son - since his snorkelling efforts until then had not been particularly successful, but the staff convinced me he would have a blast.

Max couldn't stop talking about it from the moment I told him and I had my fingers crossed there would not be a cancellation of the trip!

As one of the smallest snorkelers ever, he didn't quite fit the smallest wetsuit …. but he didn't care, also not for the fact that if was pink with flowers and dolphins … He probably actually liked that last detail.

In the morning we were picked up by bus from our caravan park in Exmouth itself and driven  across to the other side of the peninsula to Tantabiddy Jetty. Here we boarded a very sleek looking boat boasting 3 x 300 horsepower engines … this was going to be fun ! 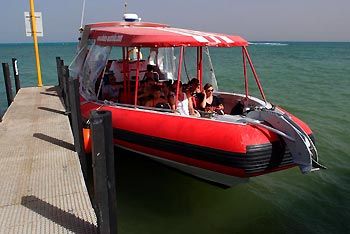 The boat was reasonably roomy and fully shaded and apart from the skipper, there were two dive masters on board and 10 other passengers.

The first snorkel site was only a short drive from the Jetty and obviously also to 'check' everybody out. A few of the people on board had never snorkelled and some adults even requested pool noodles to help them feel safer in the water.

Max had tried snorkelling in the swimming pool a few times with a special small mask and kids snorkel but we couldn't get him to enjoy it. He preferred his trusted swimming goggles instead. 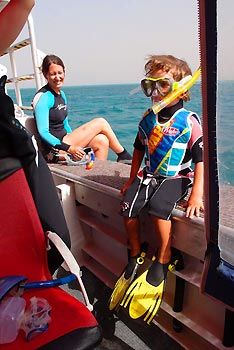 Unexpectedly, in the ocean it was different: Max donned mask, snorkel and fins for pretty much the first time and just slid into the water and started snorkelling! I was one proud daddy.

Naturally due to our profession, us diving on a regular basis and 'The Octonauts' Max is fascinated by anything marine so when he managed to spot his first parrotfish he had problems containing his excitement. The snorkel came out a few times, but soon enough he found out you can also yell though the snorkel and we could understand each other reasonably well without taking out the snorkel. We saw a school of Barracuda - one of Max's favourite fish - and the snorkel did come out again …

Despite 25 degree water Max got cold fairly quickly, but I had to drag him out of the water, he was just having too much fun.

Fortunately, the shivering quickly stopped in the warm Ningaloo sun and I was bombarded with stories of excitement and things that he saw (some of it made up …) and when we were going to go back in.

After some morning tea Max was rearing to go again.

The spotter plane went up.  Before we knew it the boat was speeding off across the reef and we only heard the crew shout: "Humpback Whales!!"
The whales put on quite a show. We all looked in amazement as a mother and calf breached simultaneously. 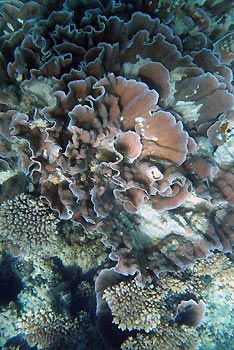 The lunch included in the trip was very nice with fresh bread rolls, cheese, salami, ham, tomatoes, cucumber, strawberries and other fruit.

After lunch the plane radioed in that there were some Manta Rays and we steamed across. We had only just hit the water when we looked down and two large Manta Rays swam right underneath us! They were probably 3 - 4 meters across and looked very relaxed, just cruising only a couple of meters below us. We got to snorkel with them for a little while until Max was tired and cold. What an incredible experience.

Not only did I really enjoy seeing the Manta Rays, it was very special to share this with Max and to see him so in his element. I guess this has set quite a standard for the rest of his life.

After the Mantas had left us there was another opportunity to go for a snorkel and check out the reef one last time but on our way to the reef Max was just too cold and we decided to call it a day. Unfortunately, this meant we missed out on seeing a Shark Ray, an interesting looking Elasmobranch of which not much is known at all.

Max was one happy vegemite and had a great sleep that night. And I can't wait for our next snorkel adventure together... 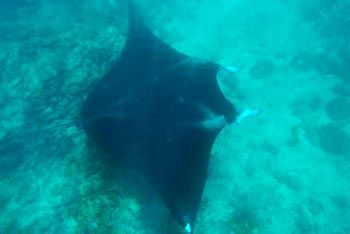 One morning my dad came up to me and asked how I would liked go with him on a snorkel tour at Ningaloo Reef. We had to do one more sleep before we would go on the boat, but I wanted to go straight away.

I had tried snorkelling in the pool, but it was difficult and I kept getting water in my nose. 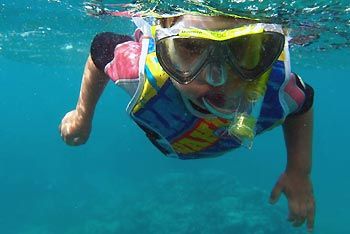 A bus came to pick us up from the caravan park. We drove to the jetty where the boat was. The people on the boat had a small mask for me, a kid's snorkel and a wet suit.

I was very excited!

When we got on board we met the other people. There were no other little kids and my wetsuit was a little too large.

After our first snorkel we saw the spotter plane that helped us find the Manta Rays.

It was so great when we saw the Manta Rays especially when they swam underneath our bellies.
Manta Rays do not have a sting and they eat very small animals and plants we can't see because they are very small. They are black on top and some have a little bit of white on their back. You don't have to be scared of them at all.
I almost had to cry because I was so happy to see them in real life.

We also saw a big school of barracudas.

It was great. Thank you daddy for taking me with you." 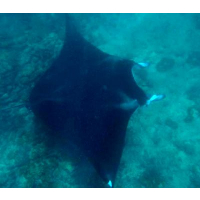