Digital technology has completely revolutionized underwater photography and what was once the exclusive preserve of a few dedicated divers, has now become so common, that you stand out if you don't have a dive camera.

Until quite recently the technology behind digital photography has been firmly divided in to two basic genres of cameras - compact digital point & shoot (or "digicams" as they are often referred to) and digital single lens reflexes (DSLRs). 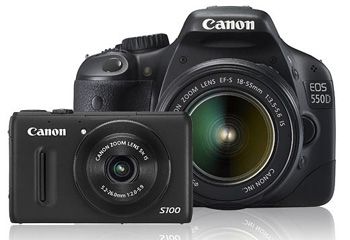 Digicams generally tend to be considered as simpler devices that most people use just for snapshots, while DSLRs are thought of as much more complex and technically competent cameras.

Probably the most fundamental difference between the two types are that digicams are "all in one devices" that have built in zoom lenses, which means you are basically restricted to the lens on the camera you opt for, while DSLR's can use a wide variety of different lenses.

Most divers interested in underwater people start with a digicam and, if the bug bites, aspire over time to a DSLR.

The objective of this, and subsequent articles, is to provide an insight in to the new and exciting technology space that has appeared on the photographic scene in the last couple of years - mirrorless or EVIL (Electronic Viewfinder Interchangeable Lens) cameras. 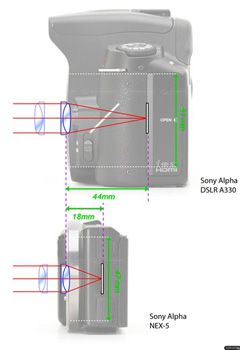 The new mirrorless cameras have created a lot of buzz in the diving community because they seem to offer two very distinct advantages.'

First of all they bridge the price gap between digicams and DSLRs in a very attractive manner, by offering a very cost-effective way to increase photographic capability underwater.

Secondly, they are small and light which really helps to address the travel problem all underwater photographers using DSLRs face when it comes to check-in time at the airport!

Which means that not only are mirrorless cameras attractive to the digicam user looking to upgrade to a DSLR, but is baulking at the cost, they are also catching the attention of the existing DSLR users who are fed up with the bulk and weight of their equipment.

The key questions both those scenarios raise are is the capability of mirrorless cameras underwater really good enough - or are they expensive stop-gaps on the way to (or back to) a DSLR.

So: What is a Mirrorless Camera?

The basic concept behind Single Lens Reflex (SLR) cameras is that a hinged mirror is used to cover the image storage medium while the subject is viewed and composed. 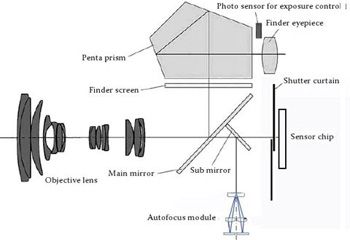 This is done by the photographer looking through the viewfinder, mounted at the top of the camera body, in to an optical prism that allows the image on the mirror below to be seen.

The image that is available on the mirror is a function of the lens attached to the camera body, where a wide-angle lens allows a broad sweep of the immediate area in front of the camera to be seen, while a telephoto lens isolates specific subjects in the distance.

The combination of the prism, mirror and various different lenses allows the photographer to compose the subject to their taste and when the shutter button is pressed, the hinged mirror rapidly swings out of the way and allows the storage medium to record the image.

The fundamental difference between SLRs and DSLRs is that with SLRs the storage medium is film and with DSLRs the medium is a digital sensor. The rest of the camera body is basically the same. 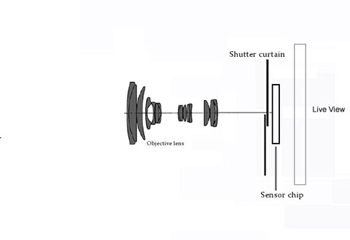 The flexibility and usability of SLRs is why they are so popular, but the downside is that the need for a prism and mirror means that even a basic model is much bigger than a digicam, while top of the range models can be really big and heavy!

The concept behind mirrorless/EVIL cameras is to remove the optical prism and mirror to greatly reduce the overall size of the camera body, while providing the ability to change lenses and to use the LCD panel on the back of the camera to view and compose the subject matter.

The storage medium is a digital sensor - there are no film based mirrorless cameras.

Mirrorless cameras have created a new "space" in the photographic world and manufacturers love nothing better, because it allows them to bypass the existing competition in the never-ending battle for overall sales volume.

In the DSLR camera space, the Big Two (Canon and Nikon) dominate while all the rest of the manufacturers try to find a way to grow.

Sony is a good example of this and a few years ago it announced aggressive plans to break the stranglehold of the Big Two by releasing a number of very good DSLRs. But most photographers had too much invested with either Canon or Nikon lenses to change brands and the Sony DSLRs have yet to really take off.

Then Sony decided mirrorless cameras was the new space they were looking for and developed the highly regarded NEX range and have subsequently enjoyed significant sales success and established a loyal following.

Mirrorless cameras offer the primary advantage of a DSLR - interchangeable lenses, but in a much smaller and cheaper package, plus they have been marketed well and have been positioned as a trendy alternative to DSLRs.

They are a very logical next step for digicam owners looking to upgrade and also provide a great ìsecond cameraî option for enthusiast DSLR owners looking for a small and light travel package.

But which format - I'm confused.

Digital photography can be very confusing to the uninitiated because of all the technical jargon and acronym soup related to the size of the sensor - FX, APS-H, DX, APS-C to name but a few and now we have Four Thirds and Micro Four Thirds.

The reference point for all these sensor formats is 36mm x 24mm, which is the size of the piece of 35mm standard film that used to record the image. 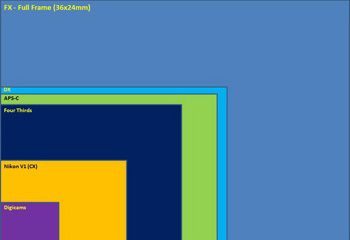 FX sensors are the same size as those pieces of film, while the others are smaller and therefore apply a "crop factor" such as 1.5 with the Nikon DX format.

The crop factor is applied to the focal length of a lens, so for example a Nikon 20mm FX lens on an FX camera is a 20mm lens, but the same lens used on a Nikon DX camera becomes a 30mm lens (20 x 1.5).

The premise for the Four Thirds system is that rather than design digital sensors around a size and format that relates to film, it is better to start from scratch and design for purely digital use and the original concept was developed by Olympus and Kodak.

The Four Thirds sensors are approximately half the size of the FX sensors and use a ratio of 4:3 (width to height) rather than the 3:2 inherited from film, which means that have a crop factor of around 2 ñ so that 20mm lens would be 40mm.

The small sensor is both the Four Thirds system biggest advantage and some would argue its weak point too. The size means that the camera bodies and lenses can be much smaller than those of a DSLR, but its detractors point out that it lacks imaging horse power of the bigger sensors. 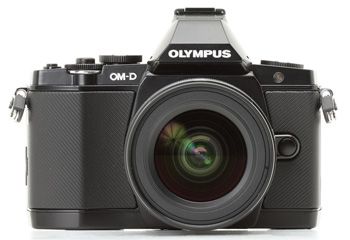 Olympus counters that argument by explaining that physically the sensor is only very slightly smaller than the DX/APS-C variants and, because the Four Thirds system is designed from the ground up for digital imaging, the sensors can out-resolve (in optical terms) the larger sensors in the equivalent focal lengths.

The Micro Four Thirds format uses the same sensors as Four Thirds, but in a smaller and much thinner camera body plus smaller lenses, so that the overall size is even further reduced ñ all of which starts to make a compelling story for underwater photography.

Sony opted to use a larger sensor for its NEX range of mirrorless cameras, which means the lenses required are much bigger than those used in the Four Thirds systems.

The results from the APS-C sized sensors are impressive, as is the fact that the NEX bodies are much smaller that their DSLR equivalents using the same sensor. 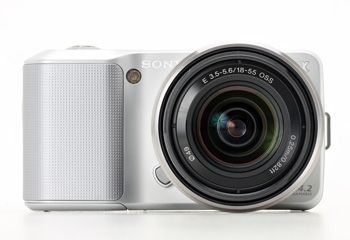 Just to add one more potential level of confusion, Nikon recently responded to the growing popularity of mirrorless cameras and released its own versions ñ the V1 and J1.

The fact that Nikon entered the fray, and Canon is rumored to be following suit, is indicative of just how much momentum the mirrorless space is gaining.

While the entry of Nikon is a positive sign, they did it with a different size of sensor ñ one that is smaller than the Four Thirds system, plus the lenses developed for the V1 and J1 can only be used on those cameras.

Nikon's mirrorless cameras are even smaller that the Micro Four Thirds versions and have received a lot of attention for their state-of-the-art efficiency.

Because the whole area of mirrorless/EVIL camera technology is a completely new space, there are no legacy lenses available to use on the new cameras and currently this is probably the biggest single drawback.

Given time this problem will go away completely as the new systems have real momentum in the market and Nikonís entry with the V1 and J1, plus Canon's recent entry in to the mirrorless space, show that they are here to stay.

Third part lens manufacturers such as Sigma are also now releasing lens for various models which is a very positive sign.

But for now, none of the manufacturers have a complete set of lenses available although Panasonic and Olympus, with their joint format Micro Four Thirds system, are close followed by Sony.

For underwater photography, the biggest gap is with macro lens availability ñ but again if the rumours are to believed, the missing lenses are on their way.

Simply stated, mirrorless/EVIL cameras are an exciting new area of photographic technology that offer many of the most important features of DSLR's but in a smaller, lighter and cheaper way that is particularly appealing for use underwater.

They are both a logical step-up for many underwater photographers who started with a digicam and are ready for something better and, at the same time, a logical step-down for DSLR users who are tiring of all the hassle of carrying their gear around or getting hit with excess baggage charges.

Both ways, this is a space to watch, and the next article in this series will look at the housings and associated equipment needed to use these cameras underwater.

Advantages of Mirrorless Cameras
▪    Smaller and lighter cameras and lenses than DSLRs
▪    Interchangeable lenses
▪    No mirror means one less piece of precision equipment inside the camera
▪    No mirror means no "mirror slap" noise and resultant camera vibration/movement.
▪    The smaller sensor size gives deeper depth-of-field for the same equivalent field of view and aperture.

Disadvantages of Mirrorless Cameras
▪    The sensor is smaller than the ones uses in DSLRs and so (theoretically) the image quality will be less.
▪    Auto focus is not as good as on a DSLR but is only really an issue with sports photography
▪    No high quality optical viewfinder
▪    Because there is no mirror over the digital sensor, changing lenses can introduce dirt and dust more easily    than with a DSLR ñ although many mirrorless cameras dust-removal systems.
▪    The smaller sensor with its deeper depth-of-field means it is more difficult to achieve out-of-focus  backgrounds. 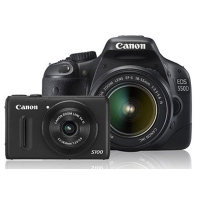