For the Adventurer - Diving the Banda Archipelago 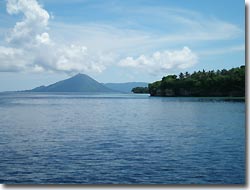 Visiting Banda is interesting for two reasons: excellent diving and its amazing history. Banda islands, part of a volcanic group of islands covered with lush vegetation, have been a destination for traders for more than two thousand years. Initially, Asian traders came to the islands for clove and nutmeg. It was the latter that inspired Europeans to seek control of the Banda Islands. In those days Venetians controlled the entry of these spices into Europe reaping huge profits: these spices were worth their weight in gold. Starting in the 15th century, different European colonialists have come and gone in the Banda islands. 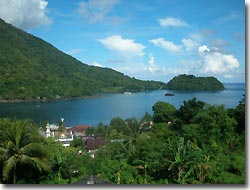 In 1512 the Portuguese, the Spanish in 1521, in 1579 the English and in 1602 the Dutch got to the Banda islands. It is the latter two colonial powers that had the greatest impact on the islands - all because of the power of the spice. In March 1603 the English set up the first British colony and raised the English flag on Run Island in the Bandas. This island is only 16 kilometres from the Dutch base that was on Naira Island. This event initiated hostilities between the English and Dutch.

When in 1609 the Dutch attempted to forcefully gain a monopoly over the nutmeg trade they began repairing the old Portuguese Fort Nassau. Being disturbed by the arrogance of the Dutch, the local Bandanese chiefs ordered the killing of 43 Dutch. This was followed in 1621 by the Dutch killing of 44 traditional leaders in the Bandas, among them eight village heads known as orang kaya. 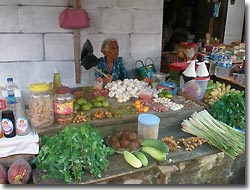 The Dutch response to the continuing threat of a native revolt was to deport, execute or starve the Bandanese, reducing the original population of about 15,000 Bandanese at that time to about 1,000. Additional workers for the nutmeg and clove plantations were brought in from other parts of the region and from Holland. 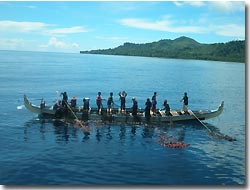 The ongoing conflict between the Dutch and English concluded in 1667 in the Treaty of Breda which specified that Run Island in the Bandas was given up by the English to the Dutch in exchange for the island of New Amsterdam, now known as Manhattan, New Jersey and the Delaware estuary; to secure the precious monopoly access to the nutmeg for the Dutch. This monopoly was relatively short-lived as in 1770 Frenchman Pierre Provost smuggled nutmeg and clove seedlings from the Banda islands to Mauritius.

Now, the Bandas are promoted as a destination for keen divers,

historians and eco tourists. In 1970 Des Alwi - a local - returned to the Bandas to safeguard their historical sites, culture and natural resources including its nutmeg production and reefs. In 2008 Des, in his eighties, is still the overall leader of the Banda islands with seven orang kayas, each ruling with independent powers on each island. He inherited this position from his mother's father; this matriarchal system begun in the seventeenth century following the Dutch killings of the sons of the orang kayas. 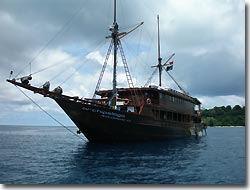 Des also had an influential role in modern Indonesia through his close friendship with Mohammad Hatta and Sutan Sjahrir who promoted independence of Indonesia; a new Indonesia not without conflict but more open to tourism.

Having arrived in Ambon in the east Indonesian province of Maluku we started our journey to the Spice Islands by boarding the Archipelago Adventurer II, one of the premier liveaboards exploring the East Indonesian archipelago.

The traditional style luxury boat fits up to 20 guests and makes diving and experiencing the islands very comfortable and provides a relaxing atmosphere. With an equal number of staff, divers are given all the attention they could think of - they are even assisted into and out of their wetsuits. 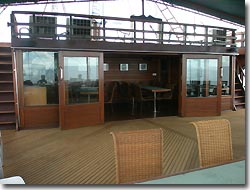 One of our wetsuits even got a surprise stitched-up repair in between dives.

Four meals correspond to four dives per day - a typical day starts with a continental breakfast which is followed by a first dive, between the first and second dives a cooked a-la-carte breakfast is served and between the second and third a good buffet-style lunch is served; a night dive can be added before or after dinner depending on the dive schedule of the Archipelago Adventurer II.

Super friendly and accommodating staff serves good and varied food which Western travellers would be accustomed to. Our fellow divers had French origins living in Hong Kong and Jakarta and a group of Americans from California; all with a variety of experiences and different skill levels.

Nitrox is available and free of charge to those qualified to use is. Others can become Nitrox certified as part of their trip and also enjoy the advantages of Nitrox diving from dive one.

Photographers are well catered for with charging stations inside the air-conditioned large lounge of the boat under a big flat screen TV to review video if needed. Separate camera-only rinse tanks on each side of the boat were always clean and big enough for the big 'guns' some people lug around the planet these days.
We enjoyed the sizable cabins on the Archipelago Adventurer II which are luxurious, air-conditioned with comfortable twin or double beds, large bathrooms and good storage space as well as a working table. The rooms are decorated in a classy modern finish and serviced daily. The bathrooms are large, clean with hot showers and all necessary amenities; towels are changed every second day. 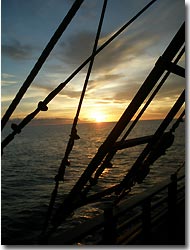 Arriving from Ambon on the first morning near Pulau Run, we had four days of splendid diving around the Banda islands. The boat has two tenders which were used to get closer to the dive sites. Our first dive near Pulau Run was fantastic; we dived Nailaka where we had a range of beautiful hard corals, saw a turtle and some napoleon wrasses amongst the variety of colourful coral fish.

Later that morning we dived Batu Payung which is a nice wall dive with very healthy coral gardens at a shallow depth. Early in that dive we saw a big bumphead parrot fish with a remora. From there we then moved to Pulau Besar where we dived that afternoon Karaka where we saw all kinds of life including different nudibranches as well as great barracuda and dog tooth tuna. While many of our fellow divers did a dusk dive to see mandarin fish mate, we enjoyed the beautiful scenery and sunset from the top deck; followed by drinking some Bintang beer and watching the full moon.

On our second diving day we had our first dive near Pulau Besar and dived a site called Lava Flow. This site is quite well-known after the volcano Gunung Ape erupted in 1988 and lava covered all corals. Since then, in only 20 years, table corals and other hard corals have grown enormously at a rate rarely seen elsewhere. It was amazing to see how quickly coral had grown back. While the fish life was okay, the fascinating coral growth was very, very impressive. Later that morning and mid afternoon we moved to Kanang Hata and dived Hatta Wall twice in different directions. There is a nice arch entry point and very healthy coral growth on the wall and at shallow depth.

One of the highlights of the first dive was a banded sea snake that was swimming around openly which provided a great opportunity to observe this sea snake more fully and for a lengthy period.

The next day we explored Pulau Naira and spent the morning walking through this historic little town. The town has interesting houses dating back from the Dutch and English times as well as the well-kept Fort Nassau

which is worthwhile walking to. The view from the fort is fantastic overlooking the waters around the island. This excursion on land was followed by two dives: Batu Kapal and Pohon Miring. The first site features a sizable pinnacle that is covered with huge colourful sea fans - an amazing surrounding. Amongst the typical coral fish we also saw a giant moray eel and a school of midnight snapper. Pohon Miring is a wonderful wall dive with a swim-through channel and a lot of soft and hard corals as well as all kinds of fish.

After three days of diving the Spice Islands we started our journey back to Ambon heading overnight to the island of Nusa Laut, which is also accessible from Ambon, for another full day of diving.

This already was our final day of diving from the Archipelago Adventurer II with one dive at a place called Akon and two at Amet. At Akon we had a fantastic wall dive with big arch entry point. There were many little things but we also saw a white tip reef shark. Along the wall we saw a pair of ghost pipefish, black leaf fish and a variety of nudibranchs. The second site was a steep drop with hard coral garden with a sandy bottom.

Both dives had a variety of small coral fish as well as garden eels and some larger fish like dog tooth tuna, wahoo and black tip reef sharks.

Unfortunately, our flights were booked very early for the departure day so we missed out on the following day diving Pulau Tiga, which could have been avoided by better trip planning, fortunately we had dived Pulau Tiga the previous week from our Maluku Divers base.

Overall, diving the Banda islands and Nusa Laut was excellent and well worth the travel. The giant sea fans, the enormous coral growth were lava had covered all life 20 years ago, and the abundance of fish life both in numbers as well as species variety will remain in our memories for long.

The Archipelago Adventurer II was a great base with fantastic staff providing a professional and relaxing environment to anyone but the most discerning diver and next time we will choose from the longer itineraries maybe discovering Raja Ampat where another adventure awaits ...

Getting there:
See Ambon article.