It is with great pride that we announce the first official sanctions in our No Take Zone. Last week our Rangers encountered two fishing boats laying gill nets about 30 minutes north of Misool Eco Resort. The illegal fishermen were intercepted on a routine patrol of our 1220 sq km No-Take Zone. The Rangers inspected the boat papers, which very clearly specified that they were forbidden to fish in conservation areas, like ours. Furthermore, they were fishing for sharks and rays, which was declared illegal in all of Raja Ampat in October 2010. We confiscated their boat papers and ordered the crew to immediately start hauling in their huge nets. 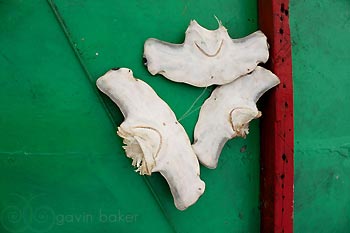 The deck of the boat was strewn with body parts drying in the sun. There was a clutch of miniscule shark fins, skins draped over drying racks, and the disembodied heads of three juvenile hammerhead sharks. Neither Andrew nor I have ever seen a live hammerhead in Raja Ampat. In fact, the first underwater sighting confirmed with a photograph was just 2 months ago by one of our guests. This illegal fishing boat was pulling up gill nets within view of the dive site where the hammerhead was photographed in March. We jettisoned everything- fins, skins, backbones... it all went back into the sea where it belongs.

The process of pulling in the nets took the better part of half a day, with three deckhands and the help of a motorised fly-wheel. These nets are many kilometres long, and they kill indiscriminately - anything too big to swim through the holes in the net is snagged, including sharks, rays, dolphins, dugongs, whales, birds, and turtles. When the nets break free of their tether, they become ghost nets drifting through the sea. These nets are built to last from synthetic materials. As animals become entangled, predators come to investigate and get tangled as well. The cycle goes on and on for months or years, until the currents snag the nets on a reef. It's a dirty and destructive way to fish.

I jumped in the water and snorkelled along side the boat. The net disappeared into the blue beneath me, tethering the slipshod fishing boat to the sea floor some 100+ meters below. The seemingly unending expanse of net was mesmerising, hypnotising. At some point there was a flash of white looming below me, and as the net drew closer, I could make out the outline of a tangled, thrashing animal. A few more turns of the fly-wheel above us and it became clear that this was a massive shovel-nose ray, very much still alive! 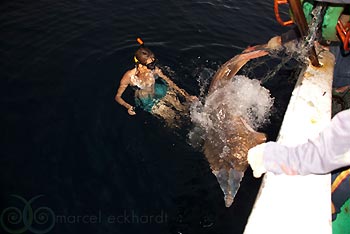 For those of you know don't know, a shovel nose ray is an elasmobranch, somewhere between a shark and a ray. The front end looks just like a ray, and the back end looks just like a shark. Sometimes they're referred to as guitarfish. This is the first time I had ever seen one alive, and I can tell you they are gorgeous creatures, this one easily spanning 2 meters from tip to tail.

I shouted for the guys on deck to stop the fly-wheel, and it sputtered to a halt just as the animal's tail left the water. The nylon net had already begun to slice through the animal's flesh, and its panicked thrashing only wrapped the net tighter - the race was on to free the ray before any more damage was done. Andrew passed down my dive knife, and I searched frantically for bits of net to cut without inflicting any further damage on the already bloodied ray. Ultimately, we were able to extricate the ray and there were whoops of joy all around when it finally slipped out of the net and swam back down into the depths. It was a small victory, but a meaningful one.

Once the nets were all collected, our Rangers escorted the boats back to the Resort, where they tied onto our mooring buoy to await processing. The following day, local authorities arrived and the boats were taken to the village from which we've leased our No-Take Zone for processing. The community elders there have recently instituted a 'Keputusan Adat,' roughly translated as 'Traditional Agreement,' which clearly outlines specific sanctions for boats caught fishing in our No-Take Zone. This was the very first case to be prosecuted in accordance with the new regulation, and the boats received a fine of approximately 3 month's wages, paid directly into the village's coffers. The boats were essentially impounded until the captains paid up, after which they were dispatched to Sorong to tell all their shark-fishing friends about their treatment. 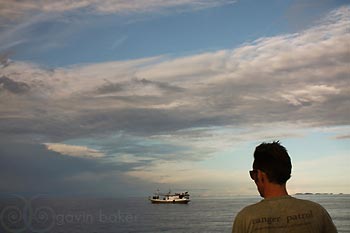 We are now half a decade into our community patrolling effort, and if we've learned anything along the way, it's that a clear enforcement strategy is absolutely essential to conservation.

Without a well-defined mechanism for enforcement, which includes punitive measures, regulations amount to nothing more than casual suggestions for good behaviour at sea. We applaud the local Papuan leaders for their forward-thinking measures. Our next step is to scale up this homegrown victory and expand an enforcement strategy beyond the boundaries of our No-Take-Zone and to the rest of Raja Ampat.

In October 2010 Misool Eco Resort and Shark Savers successfully petitioned the Raja Ampat government to establish a shark and ray sanctuary - by the Bupati's decree, it is now expressly forbidden to fish for sharks, rays, turtles, and dugongs in all 46 million hectares of Raja Ampat. This was a landmark decision, especially considering the fact that Indonesia is the world's largest shark fishery. The country has been methodically stripping its most valuable marine resources to sell to China, where increasing numbers of consumers demand shark fin soup. 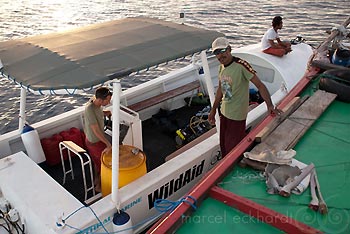 Thankfully, leaders here including the Head Regent of Raja Ampat and the Head of Raja Ampat's Tourism Depatment are very supportive of conservation initiatives. They understand that apart from the critical part sharks and rays play in the ecosystem, they also play a vital role in the local economy. Without these beautiful animals, Raja Ampat's nascent tourism industry is building on a crumbling foundation.

And so our Ranger Patrol continues to expand. As many of you already know, we just about tripled the size of our No-Take Zone late last year. Thanks to generous support from Wild Aid and other private donors, we've been able to purchase a new speedboat so the Rangers can patrol the new area around the Daram Islands.

We've employed a new team of local rangers and also started a community patrol, in which each week 2 community members join the team to participate in the patrol activities. This week, they've been busy building a new ranger station in Daram. We'll be visiting the islands together over the weekend to make the necessary supplications and offerings to local spirits. Once that's done, our operation can officially begin. 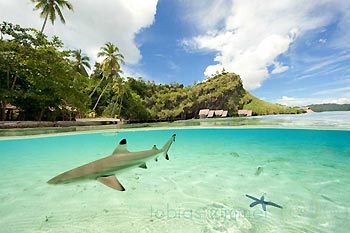 By now, hopefully you're asking yourself how you can be a part of this conservation success story. Well, we've got a few ideas for you! The first is to come and visit us. Simply put, tourism supports our conservation efforts. Let us show you around the world's richest reefs - that's the best way to illustrate how our conservation initiatives are paying off.

Alternatively, we've set up an Indonesian charity to receive funds destined for our conservation initiatives. We are hoping to raise enough money to replace our original Patrol boat, which as put in several years of dutiful service and is now sorely in need of retirement. The new boat plus engines will cost us somewhere in the neighbourhood of 60,000 USD. We also need a considerable reserve fund to staff the patrol and buy fuel. Please contact us at info(at)misoolecoresort(dot)com for more details about how you can get involved.