A new angle on underwater videography has been realised by Jack McCoy who filmed stunning sequences of surfer from inside the waves, tracking them with the German made ultra fast sea scooter called the SEABOB.

Music legend Paul McCartney was so impressed, he recruited award-winning surf filmmaker Jack McCoy to create a music video for his previously unreleased track "Blue Sway."   Written nearly 20 years ago, McCartney's never-before released song, "Blue Sway," will be available for the first time on the bonus audio disc of the special edition of McCartney II.  The music video created by McCoy will also be featured on the bonus DVD included in the set. McCartney II will be released on June 14th by MPL and Concord Music Group. 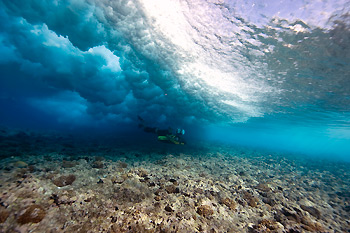 Jack McCoy has been capturing the surfing vision in a truly unique way.  Using the high powered SEABOB, the filmmaker found that he was able to travel behind a wave, creating underwater images that have never been seen before.   "About two and a half years ago I was introduced to this high speed scooter and immediately started to develop it into a tool that would allow me to capture the underwater world I've been watching myself for years. Now I'm free to not only track the action, but get to places underwater quicker and show things I've never been able to film in the past."

Being able to travel up to approximately 10 miles underwater, McCoy's HD camera is mounted to the top of the scooter and is designed to be able to tilt up or down, as well as spin 360 degrees, to allow him to film extraordinary angles.

Over the past couple of years, McCoy set out to capture footage for his surf film, A Deeper Shade of Blue, which opens this June at the Maui Film Festival.  During the editing process, McCoy put one of his surfing sequences to a song off McCartney's The Fireman album.   A mutual friend, Chris Thomas, saw the footage while visiting McCoy in Australia, and when he returned to the UK he gave McCartney a copy of the sequence. 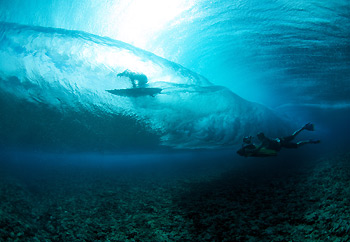 "Paul was pretty stoked with what I'd created.  He immediately thought my images might be suitable to go with his unreleased song "Blue Sway" and asked if I would like to have a listen. When I heard it, I started dancing around the room because I could imagine editing my shots to the song," said McCoy.

McCoy spent the next six weeks creating the music video, while also working full days on making A Deeper Shade of Blue.  McCoy compiled and edited footage that he filmed off Tahiti's Teahupoo reef to create what became the "Blue Sway" video.  The final result was exquisite.

"When I saw Jack McCoy's underwater surfing footage put to the soundtrack of "Blue Sway" I was blown away," said McCartney.  "Blue Sway" won 'Best Music Video' at NYC BE FILM Short Festival this past May, and the video will be featured as part of Surfrider Foundation's summer PSA campaign.  Surfrider Foundation is a non-profit grassroots organization dedicated to the protection and enjoyment of our world's oceans, waves and beaches.