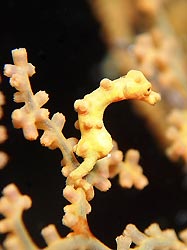 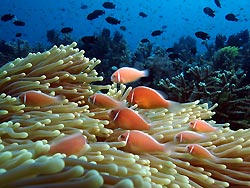 So, where to go? We set of on a four-resort tour to the north and the south taking in the provinces of  Oro, New Ireland and Milne Bay. Read below the second instalment of this story. Part I covers Oro, and Part II New Ireland.

Purpose-built Tawali resort is hidden in the tropical forests on top of a limestone on the eastern cape of Papua New Guinea, a two-hour drive and ten-minute boat ride from Alotau airport. A wooden walkway leads up from the jetty to the smart reception area, restaurant, and rooms. Milne Bay province got its reputation as a premier dive site through liveaboards started by Bob Halstead, one of the pioneers of PNG diving, with the MV Telita. In 2004 Rob Van Der Loos, owner of the MV Chertan liveaboard, and Bob Hollis, the owner of Oceanic, starting building a resort to cater for divers who prefer more a luxurious between-dive setting. 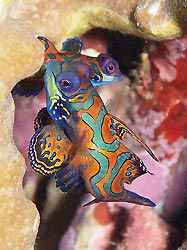 Arriving late in the afternoon and only having three days for diving, genial dive centre manager and instructor Alfred organised a house reef dive as soon as we had dropped our bags off. The house reef is large enough to occupy curious divers for several days. As with Tufis house reef, a plethora of the oceans most intriguing creatures can be found very close to the jetty. Warty Frogfish, a rather bold octopus, and another Mandarinfish inhabited coral head were all within 15 metres of the ladder.

Diving is conducted from a converted tuna fishing boat, and seemed like considerable overkill when we walked down the next morning with two other divers. It could have comfortably taken five times our number. Still, it soon proved its worth in the chop as we ploughed along for an hour to Crinoid City. The surface current was pretty strong, but a judiciously placed rope running the length of the hull and down to the mooring point made hand-over-hand progress easy. The aptly named site is a good place for Merlets Scorpionfish as it likes to hide amongst the crinoids, and Alfred soon spotted a green one. 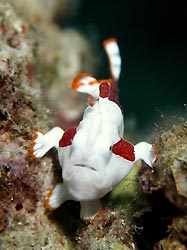 Dinner at Tawali had a slightly more formal feel to it than the other resorts, partly because it is the only one where couples have their own table, and partly because the topside staff, on the contrary to their dive crew counterparts, were more reserved than at the other resorts. They paid less attention to details, with the drawing pin in my soup that I almost swallowed being the most memorable.

The next day the sea was totally flat, like an oil bath, though the current still made for fast drift dives and challenging photo composition. It was clear to see where the area got its reputation with more fish-and-coral-covered reefs. Local guides Jacob and Charlie also had a keen eye for pygmies, and pointed out three different sub-species that morning, before spotting a Bamboo Shark snoozing under a small coral head.

Whilst these reefs were all good, Deacons reef was, due to its unique topography and more sheltered nature, the stand-out site that we visited. Located next to the shore of the mainland it starts as a sheer wall dive that ends in a series of shallow stone gullies and passages and gives a feeling of flying through a mini underwater mountain range or a moonscape dotted with clumps of long whip coral strands.

Just round the corner lies Lauadi, Tawalis best muck diving site. Devoid of any coral, the anthracite grey volcanic sand slopes down into the depths on a 30 degree angle.

Lurking in the sand, hiding behind tiny bits of rubble, and sitting on wood debris a Pacific Seahorse, a 1-cm wide squat lobster, an Emperor Shrimp, a pasta-like flabellina , and several more anemonefish allowed themselves to be digitally captured.

It was the last dive of the trip and it was ending with another great dive. The other three divers and two guides had gone, and even Charlie was starting to look a little bored. I had been down 65 minutes already, it was time to go back to the boat. Unfortunately, close to the shore at a depth of five metres, we went past a three metre by three metre patch of rubble and coral. I tried not to look at it. I failed and a Zebra Dwarf Lionfish caught my eye, and then so did an eel, and a Peacock Mantis Shrimp scurried under two more lionfish. I shrugged apologetically and Charlie emptied his BC and lay down on the sand. PNG had turned out to be highly addictive.

Over the three-day weekend closest to the September 16th Independence Day, close to 100 tribes gather at Goroka in the Eastern Highlands for a celebration of their cultural diversity. Only a couple of hundred foreigners attended this spectacular and unique event. Last year, I was one of them. It was my first time, but will surely not be my last. 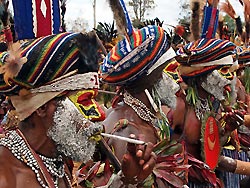 Amidst a riot of colour, singing, dancing, and feathers I wandered through the field of performers, taking pictures and trying to chat with the different tribes.

Although the dancers were keen to pose for the camera and readily struck a pose, it is far from a show designed for tourists. Quite the opposite in fact. The first Goroka Show was held in 1957, the brain-child of administrators and missionaries trying stop virulent inter-tribal conflicts and implemented by Australian Patrol Officers (PNG was under Australian administration until peaceful independence was arranged in 1975). Instead of fighting over ancient feds and cultural differences, the idea was to get together and celebrate diversity, take part in competitions, and intermix peacefully. 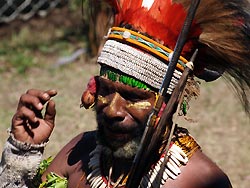 As unlikely as it sounds, the idea worked, and fifty three years on is still going strong. There are no longer any competitions (I can imagine the archery and spear throwing competitions were hotly contested and probably not the best way to promote peace), not even for dancing or singing. Quite rightly, the organisers feel that one cannot say that one cultural dance is better than another without giving the feeling that the culture itself is being judged. Nowadays each group has a section of the showgrounds and dances and sings there from 10 am to 4 pm each day.

There were a considerable number of womens groups, wearing more birds in their headdresses than youd find in a Philipino smugglers suitcase, their glimmering breasts sporting as many kina shells as they possess in order to display their wealth. Fierce-looking Silimbuli warriors 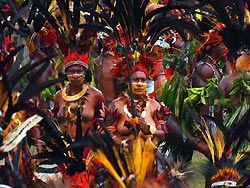 with blackened faces in huge hair-woven berets jumped up and down in unison to the rhythm of their kundu drums, dissuading any challenge. Brightly coloured Mount Hagen warriors formed a formidable spear line, but chanted and whistled cheerily whilst grass-skirted Engan ladies danced and sang as their men beat out a tune on bamboo (and hardware store PVC) pipes with flip-flops. One tribe had giant bird and butterfly frameworks on their backs in a sort of Rio Carnival style, others acted out stories about spirits and ancestors in song, shaven headed children with their hair made into beards playing the roles of pygmy ghosts. Hornbill beaks and wild pig tusks were proudly worn, and grasses and leaves used as dress and decoration in a myriad of ways. Every tribe was stunning, with one exception.

The famed Asaro mudmen, with their white clay-covered bodies and giant clay masks used to make victims believe they were being attacked by spirits, mainly sat in the shade and tried to sell masks and clay models despite the cajoling of the organisers. They seemed to do little trade, the 200-odd foreign visitors were mainly engrossed in the rest of the action.

You can stay in the madly expensive Bird of Paradise hotel in town, or use the basic but clean and safe accommodation provided by the National Sports Institute right next to the showgrounds and save about 150 euros each per night and eat for about 5 euros per day.