Frogfish on the Reef 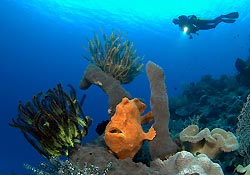 At first glance, divers might mistake this animal for a sponge. But a closer look reveals that this odd looking creature is actually a member of what some have called the ugliest group of fishes in the sea." Frogfish may not be aesthetically appealing by conventional standards, but their unusual appearance has made them a favorite with underwater photographers, who will go to great lengths to seek out these stealthy, slow-moving predators. 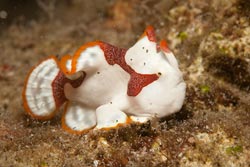 In addition to physiques and coloration that allow them to blend into sheltered reef and sand-bottom backgrounds, Frogfish have another tool that helps them capture small fish, crustaceans and worms without the need for pursuit. A stalk-like dorsal spine protruding from above the frogfish's eyes is used to mimic and lure victims close, then the frogfish opens a gaping mouth  which can expand to the full width of its body  and simply engulfs the prey.

At an average of 10 to 12cm in length, the freckled frogfish would be considered mid-sized within the frogfish family, but small compared to the giant frogfish, which is another signature animal of this region. The giant frogfish can grow to lengths of up to 40 cm, and will sometimes attempt to engulf prey even larger than itself. 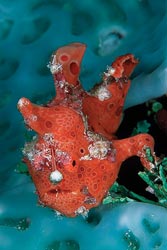 The specimen in this photo was found idling on a coral outcropping at the inner edge of a shallow reef in the Wakatobi National Marine Park, in southern Sulawesi. This particular species goes by several names, including the scarlet frogfish, freckled anglerfish, freckled angler and freckled frogfish. In addition to reefs, it can be found lurking in areas of sandy bottom where there is sponge growth and leaf litter. Like most frogfish, it tends to remain in a small area unless provoked to 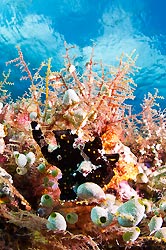 move, and over time will take on the coloration of its surroundings.

Can you spot the frogfish in this picture? Heres a clue, its the black blob in the middle.
Frogfish give the word wallflower a whole new meaning. True masters of deception, nature has provided these squat and lumpy fish with warts, filaments, stripes, spots and skin flaps to blend into their background, whether it is a rock, a plant, a sponge or a piece of coral. They can even change colorsubtly or completelyover a few days or weeks. This fellow was photographed on the House Reef at Wakatobi Dive Resort.