Story and photos by Michael Aw


The tropical seas from the shores of East Africa, the Red Sea, through to South East Asia and then eastward to Australia, the Solomon's and extending to the islands of Hawaiian Islands is the world's richest marine province. Sprinkled across this vast aqueous Milky Way are sparkling coral reefs in uncountable numbers, the oldest richest biological communities on earth. No where else can one find so many diverse animals in assorted shapes and forms surviving in extraordinary abundance, complementing one another in an uncanny intensity of life.

About midway along this rich biological realm straddling 5,600 kilometre from the Indian to the Pacific Ocean is the Indonesian Archipelago, commonly referred to by marine scientists as the heartland of biodiversity. The region congregates the greatest concentration of species. Although ocean currents distribute fish and invertebrates widely, the greater the distance from Indonesia, across the Indian Ocean or the Pacific, the fewer species are found. Two of the world's top ichthyologists, Dr Gerry Allen and Dr Jack Randall, have documented more than 3,500 species of fish in Indonesian waters compared to just over 2,000 species in Palau, 1,200 species on Australiaâs Great Barrier Reef and approximately 800 species in the Red Sea.

From my 50-odd expeditions to Indonesia in 15 years, I have come to conclude that the greatest diversity of life in the world is found on the reefs of Bunaken Marine Park (North Sulawesi), the Lembeh Strait and the Togean Islands (Central Sulawesi), Tukang Besi (Central Sulawesi), Alor (East Nusa Tegagara), Bali, the Berau Islands (Kalimantan) and the Raja Ampat Islands of Papua.

Bunaken Marine Park is a 75,275ha (186,000 acre) reserve, comprising the islands of Bunaken, Siladen, Manado Tua, Montehage and Nain. It is separated from the mainland by an oceanic trench 2km (~1 mile) deep. Frequent upwellings from the deep bring rich nutrients to sustain an abundant marine habitat. This tiny cluster of islands harbours some of Indonesia's richest coral reefs. Diving in this area is, almost without exception, wall diving on sheer, vertical coral walls with phenomenal growth well into the depths, often below 50 metres. Fish life is both profuse and diverse, with all the common reef fish and frequent visits by sharks, rays, tuna and jacks. The coral reefs of Bunaken have been the focus of great scientists and naturalists since the 19th century, and new species are still being discovered. Pods of pilot whales, spinner dolphins and, every now and again, families of Orcas, are found frolicking within the reserve.

Envisage a savanna landscape with a steamy blue sky and pyramid-shaped hills; envisage Komodo. Though Komodo is located in the centre of the Indonesian Archipelago (between the islands of Flores and Sumbawa), its islands are unlike the other lush green tropical isles of Indonesia. Dry weather conditions distinctive to the area, support a dramatic, desolate setting of harsh, undulating terrain dotted randomly with Lontar palms.

Investigative scientists suggest that the reefs of Komodo are among the most productive in the world due to the rich upwellings and high degree of oxygenation produced by strong tidal currents flowing through the Sape Straits. Komodo harbours some of the most pristine and richest coral reefs on the planet. The reefs here boast an unimaginable variety of invertebrates, more than 1000 species of fish and 250 species of reef-building corals, and new species are constantly being discovered.

The Raja Ampat Islands of Papua (formerly Irian Jaya) are currently being reviewed for UNESCO World Heritage Site status. Scientific surveys were conducted by teams from Conservation International and The Nature Conservancy in 2001 and 2002 respectively. According to coral expert John Veron, Raja Ampat has a higher density of species than anywhere else. 'Never before in the world have researchers found 400 coral species on one dive, as they did in Raja Ampat,' he has said. Collectively, coral experts documented 465 different corals, 20 of which are suspected to be new to science. 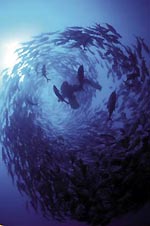 Raja Ampat -- literally translated to mean 'the four kings' -- is a group of islands comprising Waigeo, Batanta, Salawati and Misool and is located to the west of Sorong, on the northwest tip of the main island of New Guinea. My first impression of the Raja Ampat was that the reefs are extraordinarily healthy relative to elsewhere in Indonesia. The fields of stony corals are extensive, limestone structures festooned with every imaginable species, colour, shape and variety of coral, sponge, tunicate, sea star and anemone. The reefs dazzle with life -- in the colours of corals and ornamental reef fish. Perhaps it is a blessing that these richest reefs lie so far east, where sparse population and low demands from humanity have a lot do with their near pristine state.

A good indication of the health of the reefs is the regular sightings of true giant clams (Tridacna gigas) at Raja Ampat. Among expanses of Acropora table corals, we easily found 1.5m (5ft) clams displaying their luscious large green and blue mantles.

Many visitors to Bali are oblivious to the world class dive sites around the island. Amid the cornucopia of lush coral reef lives an equally diverse fish population. All the classic reef fish are here in force: parrotfish, Moorish Idols, angelfish, groupers, frogfishes, wrasses, eels, lionfish . . . the list is endless.

Bali's fish population is not limited to reef-dwellers. Fed by the rich upwellings of the Indian Ocean, Bali's waters are home to a wide variety of pelagics â tuna, mackerel, jacks and bonito, as well as barracuda and several species of shark. Rays are common at many sites, especially around Nusa Penida, whose environs are particularly rich in big deep-water fish. Many species of marine mammal are found off the island's coasts, including dolphin, Blue and Sperm Whales and manatees, although these are admittedly very rare.

Diving can be treacherous for the inexperienced but a serious jolt of adrenaline for the well prepared. As one dive operator described Jurassic Point, one of the best dive sites in Bali as 'one of those places that can be the best, worst or last dive you will ever have'. When in the right mix, diving Lembongan and Pernida is like a dream in fantasyland, almost surreal.

The five main areas for diving in Bali are Nusa Dua and Sanur; Padang Bai and Candidasa, Nusa Penida, Tulamben and Menjangan. Each area is unique and offers suitable conditions for both beginners and seasoned divers. One of the best ways to dive the best of Bali is to join a Bali Safari package with one of the leading dive operators. 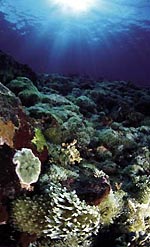 Sangalaki - off the Kalimantan coast

Pulau Sangalaki is known for its Manta Rays and turtles. The reefs slope gently, with many of the dive sites having a maximum depth of less than 20m (65ft). There are over 500 species of stony and soft corals at Sangalaki and the other invertebrate and fish life is similarly prolific. There are Manta Rays, cuttlefish, Eagle Rays, stingrays, batfish, barracuda, many species of grouper -- including Barramundi Cod (Cromileptes altivelis) -- and Coral Trout. Orange-striped and Titan triggerfish, squirrelfish, surgeonfish and many species of angelfish and butterflyfish abound, but there are remarkably few parrotfish. Sandy Ridge has garden eels. The large fields of lettuce coral are interspersed with boulder coral; currents vary from medium to strong and all the dive sites are of top quality.