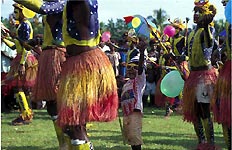 Papua New Guinea is for the adventurous.
The country has a wonderful feeling that you cannot find anywhere else in the world. There is so much in Papua New Guinea to experience as it is widely spread out and diverse. With the land that you fly over being occupied by people who have 700 different languages and cultures, it is one of the most exciting and remote places to visit both above and below the surface. The minute you step from your flight, the heat, smells of coconut husks, tropical plants, warm damp earth, colourful bougainvillea's and the friendly faces invite you to discover the wonders of Papua New Guinea.

PORT MORESBY
Once in Papua New Guinea, you don't have to go too far to get great diving. Loloata Island Resort is only 15 minutes away from Port Moresby's 'Jackson International' airport. The small island which is about 2 km long and only 400m wide forms part of Bootless Bay and is the gateway to the reefs accessible from Port Moresby. There are numerous dive locations within a close distance including wreck dives, the M.V. Pacific Gas, which lies between 15 and 40 m or the PAI II at 25 m. Both wrecks are now overgrown with corals and teeming with fish life. Suzie's Bommie is a fantastic dive site situated on white sand with a multitude of corals and marine life. This is a good site for the Pygmy Seahorses, a great bonus for macro photographers! Loloata is where you get to dive reefs, wrecks and rare species of marine creatures like the Rhinopia aphanes.
Port Moresby is also the starting point for extended trips on live aboard dive boats such as Golden Dawn to the Eastern Fields Reefs and Portlock Reef in the Coral Sea. The reefs are about 170 km south west of Port Moresby and only accessible by live aboard. Located between Papua New Guinea and Australia, the Eastern Fields are a truly unspoiled and untouched part of the Coral Sea.
Only 46 kilometres from Port Moresby is the Sogeri Plateau. Sogeri is the starting point for the famous Kokoda Trail and at 800 metres the air is cool and pleasant. 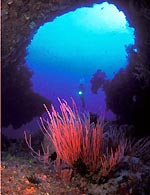 New Britain is the largest of Papua New Guinea's Islands and Walindi is about an hour's plane ride from Port Moresby to Hoskins airport in New Britain, then a 45-minute bus ride to the resort. A chain of dormant vol-canoes forms the scenic boundaries of Kimbe Bay, en-compassing hundreds of submerged reefs. Scientists studying the region have already identified more than 900 species of fish and 400 species of corals. You can either be land-based at Walindi Plantation Resort or do a live aboard trip, the FeBrina, Star Dancer and Paradise Sport depart from Walindi.
In the Kimbe Bay area there are more than 190 reefs. Dolphins are often in the area, and snorkeling with them is a great experience. Everything that is part of the tropical ecosystem exists in this bay. Within Kimbe Bay you can see everything, coral reefs, invertebrates, colourful fish life, dolphins and sometimes even Orcas. Many of the reefs have resident schools of barracuda, tuna and jacks. My personal favourite is Inglis Shoal which rises from very deep water to within 12 metres of the surface. It is buzzing with life including Dogtooth Tuna, Barracuda and Bigeye Trevally. During a visit to Walindi you can even dive with a salt water crocodile, this is an experience not to miss and the resort will organize it for you on request.
On a liveaboard, the entire coast of New Britain and smaller islands are accessible: Kimbe Bay, Witu Islands and Fathers Reef are the most popular destinations. These areas offer a huge variety of diving.

MILNE BAY
Milne Bay lies at the southeastern tip of the Papua New Guinean mainland between the Solomon Sea and the Coral Sea. The bay is some 10 km (6 miles) wide and 30 km (19 miles) long. The town of Alotau is nestled in the hills on the northern shore. The dive region includes Southern Milne Bay (Samarai Island), the outlying Islands in the East (Louisiades), the Entrecasteaux Islands in the North and the northern mainland coastline past Cape Vogel to Tufi. Tufi is a very small village with a grass airstrip and is serviced from Port Moresby. Tufi resort is excellent with some of the most dramatic landscapes PNG has to offer. The views from the resort are breathtaking. The diving in deep channel fjords creates amazing swim throughs lined with spectacular fans and corals. The variety of soft corals and fish life found here is prolific. The resort wharf will never cease to amaze you. This area was a US base of P.T. Boats during WW11. The remains of two P.T. boats make a great dive - including a deck gun and loaded torpedo tube. Also at Tufi is the 'Jacob', one of the best wrecks in PNG. Another great dive is a B17 the Bomber 'Black Jack' which is one of the best-preserved B 17 planes in PNG waters.

For the most extensive coverage of the Milne Bay region, liveaboards Golden Dawn and Telita operate in this area. They run seven and ten day trips from Alatau and Tufi and include fantastic dive sites including reef, fish life, wreck and great 'muck' diving experiences.

KAVIENG
Kavieng is the capital of New Ireland Province. Once there, you are right between two crystal clear oceans: the South Pacific in the north and the Bismarck Sea in the south. This was not always such a peaceful area, during World War II Kavieng was occupied by Japanese troops and the remains of a few wrecks are there to be explored, but the real attraction of the waters around Kavieng is the fish life. New Ireland is known for the pelagic fish action, the change of tides produces some strong currents. These in turn flush clear waters from the deep through tiny passages; it is during those currents when the pelagic action is happening. 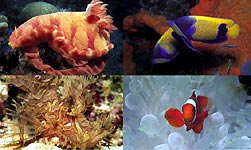 Lissenung Island is retreat about 20minutes by boat from the town with coconut palms and a beautiful white sand beach. You can easily circumnavigate the whole island in 10-15 minutes and it is a great place to relax and sit back after a big day diving plus all shore diving off the island is free. One of my favourite dives in Papua New Guinea is about 20 minutes from Lissenung at Albatross Passage. A narrow channel between two islands, this passage sucks pelagic and reef fish between its narrow entrance twice a day as the tide
rushes in and out. Eagle rays, Mantas, Tunas, Barracudas and reef sharks can be seen here. Not only is the fish life spectacular there are big fans, black corals and sponges adorning the entrance walls which are a perfect hiding place for small critters like nudibranchs and the Pygmy Seahorse. There are fresh water cave dives available for the more adventurous and Malagans Lodge can organize trips. Another enjoyable way to experience Kavieng and its surroundings is on one of the liveabaord vessels that operate in this area. Star Dancer, Febrina and Paradise Sport operate extended dive excursions and cover the huge variety of marine life.

MADANG
Madang is often called 'the prettiest town' in the South Pacific. It is on a peninsula and has some beautiful, waterways, luxuriant shade trees and views over the close by islands. It is one of my favourite towns as you can visit the markets and find great local carvings and artifacts. Although a small town, there are some great resorts in Madang such as Jais Aben Resort. It is set in tropical gardens and offers diving to a wide range of easily accessible dive sites from its own jetty. Dives comprise of a mixture of spectacular drop-offs, drift-dives and remarkably intact wrecks, including World War II American and Japanese fighter planes and merchant ships. Aquaventures also run a liveaboard - the MV Somona for extended trips to the more remote locations.

RABAUL
Rabaul was my favourite place in Papua New Guinea. It is great that it is slowly being re established and that you can still dive there. Kabaira Dive has set up and offers comfortable accommodation with your very own reef at the doorstep. If you are diving here for the first time or a return visit, Stephen at Kabaira Dive offers personalised dive tours on the WWII wrecks of Rabaul, countless reefs, walls, coral plateaus and even the island get-a-way for the more remote diving adventure.