On Friday the 16th June, a group of divers from Vision Divers headed over to Whyalla, South Australia on the long-awaited trip to witness the world renowned event of Australian Giant Cuttlefish gathering in their masses for their annual mating and 'spawn-fest'. From Melbourne to Whyalla is a twelve hour trip, and to make the trip in one day was quite tiring, however our enthusiasm was refreshed on our final arrival to Whyalla. Some of our group had already arrived a day or two earlier, and had told us how 'awesome' the diving was that we were all so excited and eager to hit the water the next morning, that the length of the trip there paled into insignificance very quickly.

After a nice relaxing meal and a chit chat with our group, the divers from Divers Delight in Adelaide met up with us late in the evening, and we planned our meeting place for the next day. Then off to bed for a good night's sleep ready for our cuttlefish adventures the following day.

The next morning we met at the dive site which is known as The Fence, at Stony Point. The entry to this site is via a reasonably steep ramp, a short climb over some rocks, and then straight into the water.

Two of our club divers tell us that when they were there the day before, the ramp and landing were being laid as they arrived at the site. How lucky was that? Must have known we were coming. The red carpet was not being laid for us - we were being sort of protected from it. Whyalla and it's surrounds has a very red earth, that really gets into everything as far as dive gear goes, so the timing for the new platform and landing couldn't have been better!

As soon as you entered the water at this site there were cuttlefish galore. In fact at this particular site, there were more of them in the shallower water than anywhere else. This site was perfect for divers and snorkellers, and a photographer's paradise.

The cuttlefish behaviour was amazing to watch, as the males "strutted their stuff", and to watch them mate with the females was also amusing to watch as it looked like they were literally devouring each other. The male would engulf the female in its mouth in order to fertilise the females' eggs. If you didn't know better you would swear he was going to completely gobble her up. After having her eggs fertilized, the eggs would be placed under ledges of somewhere 'safe' by the female. Although we did find several eggs placed on the spiky thorns of some sea urchins- not too sure how 'safe' they would have been, but hey I am sure the cuttlefish know best!

There was some discussion amongst our group as to how you could tell the difference between the males and the females, one of our members was convinced that the white ones were the males, but as it turns, we are told, the white ones are the ones that are dying. Whilst we are all amused at the antics and behaviour of the cuttlefish during the mating season, we also learned that many cuttlefish would die off soon after the eggs are laid.

The variety of markings and colours displayed by the cuttlefish were quite brilliant - these creatures certainly are experts at camouflage. Not only can they change their colour to match their surrounds, but they are also able to change their texture by putting up little spiky bits (very technical terminology) all over their body, to look like the weedy or rocky bottom, and their surrounds. 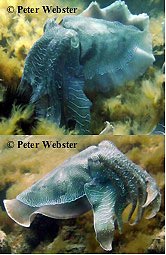 The males are very aggressive towards other males once they have found their mating partner, and will 'protect them' against other males trying to muscle in on their woman. We witnessed many fights for 'ownership' of the female. The males will often challenge each other, and when they fought, they fought hard. There were some serious altercations going on while we were there, and a few with some very noticeable battle wounds - including big chunks of flesh out of their bodies. One of the divers even reported seeing a single tentacle lying on the bottom.

The smaller males will often hang back and watch, and very cleverly try to sneak in while the other males are having it out. They can even change the colour to look like a female, so that they can sneak in close to the female and try and have their way while the bigger males aren't looking. From what we saw they are usually spotted and quickly put back in their place, but they still lurk around in the shadows - ever hopeful of a big score.

Suffice to say that we have newly discovered talent in our midst - there was some wondrous singing going on at the pub on Saturday night. I must say we have some great singers in our midst. Oh yeah - also some really questionable singing talent - but all in all it made for some great amusement for the group and our fellow restaurant guests.

Thank heavens there was not a karaoke machine around or there would have been real trouble!

The divers, their respective partners and families had a memorable trip, and we all look forward to sharing another trip together next year. If you missed out on this trip - get yourself over to Whyalla - or make sure you join us next year - definitely worth the trip!