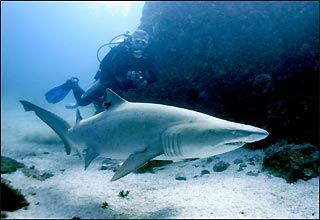 20th July 2003 .... that is the first time I drove down from the Gold Coast to Byron Bay and arrived at Sundive, jumped on one of their boats and set out to dive Julian Rocks - and I have been addicted ever since. For nearly four years I have now dived with Sundive every Friday (weather permitting). 2 dives each Friday and sometimes 3 when conditions are superb .... averaging approx 100 dives per year.

My attraction to Julian Rocks began with my desire to dive with Grey Nurse sharks ... and now I am hooked on sharks. I am constantly amazed at the diversity of marine life at Julian Rocks. From the sharks, to pelagics and various species of anemone fish ... through to the numerous species of nudibranchs, Julian Rocks provides a prolific concentration of marine life - big and small, all in one location. This makes every dive at Julian a different diving experience. Capturing the images of my experiences extends the thrill of diving into my home and allows me to share these moments with my family and friends. I use a rule of thumb that generally works well for me in as far as on days where the viz is under 15 mtrs I will always use a 105mm macro lens and spend most of my time scouting for little critters. It is amazing what life you will find when you slow your dive down and take the time to spot the little wonders of the ocean - nudibranchs, crabs, little eyes of an octopus hiding in their holes, blue ring octopus, mantis shrimp, a variety of gobies and blennies and more. And then, when the viz picks up over 20 mtrs, particularly when the Grey Nurse or Leopard sharks are about, out comes the wide angle 18 - 70mm zoom lens.

And yet, as much as I enjoy my underwater photography, I will never forget the dive on the last Friday of March this year (2007). The marine life in the Needles was so intense that after the first dive, I left my camera on the boat so I would not be distracted on the second dive from observing all that was happening around me. I deflated my BCD and knelt down on the sand and just watched in amazement. There was more concentrated activity here on the west side of Julian Rocks than what you would expect to find in an aquarium. 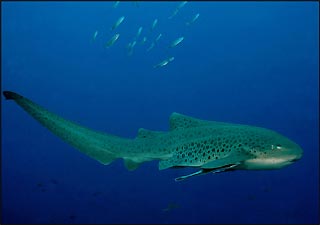 With approx 450 dives around Julian Rocks, this day was one of my most memorable. It was absolutely awesome. Every diver that got back onto the boat after that experience was overcome with excitement of what we had just experienced - it was diver heaven!! I would rank that dive my 3rd best at Julian Rocks. 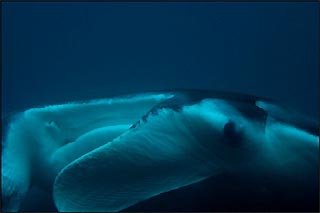 And then 3 weeks later I experienced my 2nd best dive at Julian Rocks when I had the absolute pleasure to spend 21 minutes hovering with a manta ray. Again in the Needles, the manta, which spanned approx 2.5 mtrs across it's gracious body, kept circling around us and over us .... and often just hung in the slight current allowing me to hover around it and over it. I could have sworn it was there to check me out just as much as I was checking it out.

My all time favourite dive at Julian Rocks was one Friday in June 2004. As the water was cooling down and we were anticipating the return of Grey Nurse sharks to Julian Rocks, we had asked Rod, our skipper, to drop us off directly over the Cod Hole so we could get in amongst the trenches to do a little Grey Nurse spotting .... i.e. if they were about. The viz was great that day, maybe 30 mtrs or so!

We were only 15 to 20 seconds into our descent when we realised what we were in for. 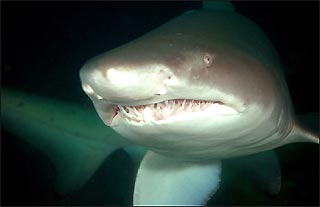 As we were descending, we starting counting .... 11, 12, 13, 14, 15 Grey Nurse sharks beneath us .... and more. Not bothered by our presence in any way (maybe because there were more of them than the two of us), these magnificent creatures just leisurely hovered around us as they swam up and down the large sand trench north
of the Cod Hole. What an incredible experience!!

Obviously, it is without question or doubt that I would strongly recommend Julian Rocks as a superb destination not only for divers but snorkellers as well. On days of good visibility, snorkellers will experience as much marine life from the surface as the divers do down below. The 3 km journey from the beach out to Julian Rocks can be a fabulous experience in itself with the regular spotting of dolphins and turtles on the surface. Countless whales are spotted during the winter months and I remember on one occasion when we spotted a large sunfish (Mola Mola) on the surface.

And more importantly, I have no hesitation in recommending Sundive as my preferred dive operation. Professional, highly skilled and safety conscious staff led by Sundive's owner Giac. Great boat skippers in Rod and Jeff, a walking encyclopedia in Dr. Dave and numerous skilled and knowledgeable instructors and guides.

I imagine I will be continuing to dive at Julian Rocks for the next 4 years .... after all, how would the fish know it's Friday if I don't show up??