Lembeh : In search of the Holy Grail 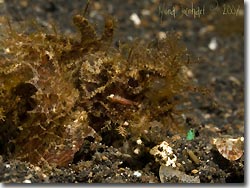 After only six months I was standing again in Bitung, looking at Lembeh just across the Strait. I was amused by the faces of my friends. We just came from Selayar, a white sandy beach with only one resort. Just perfect! Here they stood in the smelling fish market, wondering if it was a wise decision to trust me. We crossed the Strait and, guess what ? We got soaked right in the middle as rainy downpours are usual in a Lembeh afternoon...

It is a strange feeling to get back to a place such as Lembeh. Six months ago, it took me by surprise. My camera overheated at every dive. I was overwhelmed by all these new critters . Sometimes I couldn't even figure out what I was looking at. My camera was my logbook. My 100+ photos per dive helped me identifying a great number of critters. I was eager to getting everything on memory card. In the end I still had more than 800 pictures from a week's stay left. But I realised, that I haven't thought about how taking out the best of the shot. I just pressed the button.. 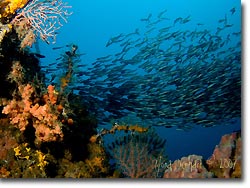 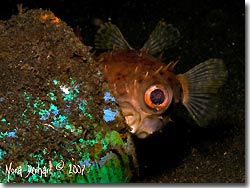 This time I had something different in mind. But what is a different shot? I watched the critters for a while. Turned around. Figured out different perspectives. Sometimes it worked, many times it didn't. I tried to find special perspectives on the common Lembeh critters, nudibranchs are wonderful subjects to try this out. All slow-moving subjects are great to experiment. I tried nevertheless to limit myself to five shots per critter in order to prevent them from becoming completely blind! 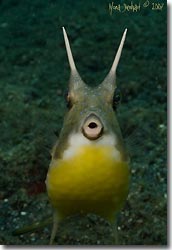 Wherever possible I was looking for interaction with the critters as with the cow fish. This little fellow was looking around for food as I was watching him almost motionless (...and breathless). I don't know why but for a second he looked up at me and then continued on his way. I was amused to see so many critter couples underwater this time. As always we had one mandarin fish dive. These small fish are wonderful and nearly impossible to photograph . Slowly appearing in the dusk, moving around. Larger males turning around the smaller females or chasing other males from their territory. And then at one moment the firework starts. Males and females join in a two second long mating pose above the corals and then vanish quickly under the rubble. I only kept 2 photos out of 30+... 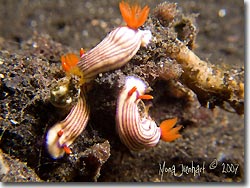 When I went through my photos after the evening meals, my friends were surprised by the number of photos I deleted right away. This is until now the most difficult thing to do for me. How selecting which shoot goes to the trash and which one is a keeper?

At some moments I nearly fell back into the "paparazzi" modus. As I said I came more or less prepared to Lembeh, but this was without dealing with my "Holy Grails". I think everybody has a wish list (especially just before Christmas :-), a special critter never encountered before, most of the time a rare species. 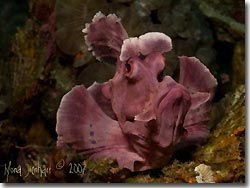 I was lucky enough to come across a purple Rhinopias. WOW! An overwhelming feeling . I really needed a couple of minutes to realise what I was looking at. In these moments my first move was to shoot. But then I stopped, watched what we called later Salvador Dali and took 5 shoots.

The Ambon scorpion fish took me by surprise as well. Well camouflaged it was almost impossible to spot.. I took some pictures with my old compact E-900 to play around with the wide angle wet lens. Unusual in Lembeh, but what a fantastic experience.

Be reassured I took plenty of "classic" Lembeh subjects. But I'm more than ever in search of the Holy Grail. The picture which makes the difference. A life long search. At least I hope so. 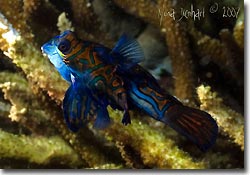 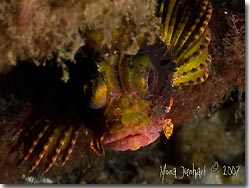