Yap, Micronesia - not just a place for Manta Rays 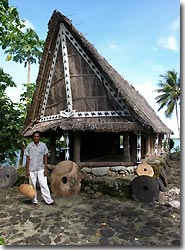 Yep, it is worthwhile traveling from Australia to Yap in Micronesia  or from anywhere else for that matter. Yap is a unique paradise in Micronesia - lush, tropical and with abundant life above and below the water. Yap is located between Palau and Guam and lies east of the Philippines. It has the Pacific Ocean on one side and the Philippine Sea on the other and actually consist of four islands very close together joined within a common coral reef. The islands are mainly fringed by mangroves, some secluded tropical beaches and a coral barrier reef.

Yap was originally settled about 3,500 years ago by seagoing voyagers from Indonesia or the Philippines; then visited by Portuguese, Spanish, British, Dutch and American explorers and traders. In 1869 Yap became a permanent German trading station until, after World War I, in 1919 the Japanese took control. The Japanese occupation of Yap ended in 1944 when it was taken under administration of the United States of America. 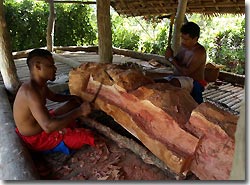 Since 1986 it has been an independent State in the Federated States of Micronesia.

Notwithstanding the influences of Europeans, Japanese and Americans, today, Yapese people are proud in their culture and traditions and often still wear their traditional dress. Organised around villages, their life centers around Men's Houses where the local Chief conducts village meetings. A Yap Council of High Chiefs still has great impact on and respect among the people.

All land on Yap is privately owned and Yapese people consider their land very valuable in that it provides sustenance and income. 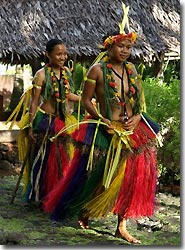 Although they are welcoming people, using the land or walking across it requires permission which sometimes can be obtained for a fee. Similarly, ownership of the outlying reefs, including the farthest edges of its fringing reef, is claimed by adjacent villages or municipalities and divers require a permission to dive at those reefs.

Our base on Yap was Traders Ridge which is a truly classy resort with friendly and fun staff. The hotel of Traders Ridge, its restaurants and bar overlook Chammorro Bay with the open ocean beyond.

Lush gardens surround the resort and offer a great tropical setting to relax and lean back after exploring the islands or diving. Part of the Traders Ridge resort complex is the Ethnic Art Institute of Micronesia which recreates the traditions of the Caroline's. 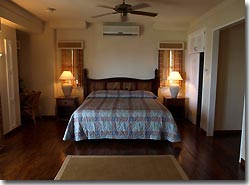 It was established by a not for profit organisation in 1994 and is dedicated to the revitalization of the traditional cultures of Micronesia. You can watch carvers and weavers in their traditional dress and if you are as lucky as us, you can witness some fantastic traditional dance performances. The bamboo dance we got to see was an amazing spectacle of colour and sounds and clearly showed the Yapese culture at its best. 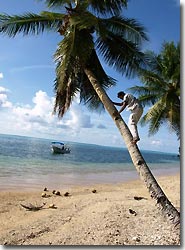 One of the resorts guides helped us explore Yap, some villages and its people. This included a trip to the Island of Rumung which had been forbidden to all foreigners since the 17th century. The restrictions to enter the island were only recently lifted so that some outsiders could visit selected areas of this historic island. The preservation of culture and tradition was paramount to the community of Rumung and it was quite an exciting feeling to step on the forbidden island and meet some of its inhabitants and see the biggest stone money in Yap.

Yap, like some other Micronesian Islands, has Stone Money which is still used today as a means of exchange. Although these huge disks rarely move location, ownership can change through marriage or according to other traditional principles. 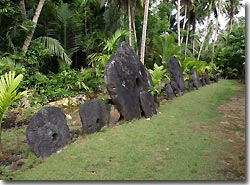 Originally, they were quarried in Palau hundreds of years ago and brought in open outrigger canoes to Yap. Their value is dependent on their size but more importantly determined by the peril of the voyage and the fate of the carver.Yapanese people know who owns each piece and the story behind it.

Another great experience was to explore Yap by kayak - following our trusted guide we paddled the mangrove ecosystem and saw wild birds endemic to Yap along with its rich flora, and other fauna. 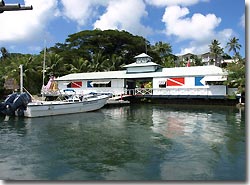 Traders Ridge runs its own dive centre with a team of competent, friendly instructors and dive guides to help you explore the pristine underwater world of Yap. The dive boats are fast, all equipped with powerfull 4stroke engines and depending on the level of the tide it takes between 10 and 30 minutes to get to most of the dive sites. Hire gear is in top condition and Traders Ridge Dive Centre offers free Nitrox to anyone with Nirtox certification  and naturally they are happy to certify anybody during their stay on Yap.

While mostly known for the Manta Rays, Yap has some other quite exciting diving to offer as well. 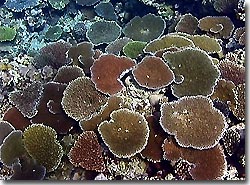 We found that diving in the South of the islands is an absolute must as fantastic walls, drop offs and caverns provide amazing scenery, the water is generally crystal clear and the reefs are healthy.

The mangroves surrounding Yap provide rich plankton for a the islands Manta Ray population. The Pacific Manta Rays found in Yap have wingspans of 5 to 7 meters that allow them to gently glide through the water despite their up to 1000 kilograms. Typically, the Mantas feed at the Miil and Goofnuw channels. Around those channels you can explore a number of manta cleaning stations where cleaner wrasses preen parasites from the gills of these majestic animals. 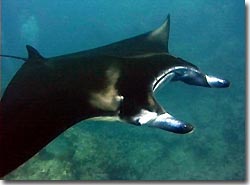 At Miil Channel with depths between 10 to 30 meters, we did a number of drift dives at the end of the incoming tide and as the tide began to change the Manta Rays appeared. As Mantas like plankton quite often the visibility in the manta channels can be quite low  especially on outgoing tides and it can be a little frustrating hanging in low visibility waters.

Some dives we were hovering over the reef flats in strong currents with the help of our trusted reefhooks hoping for the Mantas to appear  but when they do it is truly spectacular. 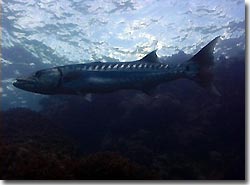 Their graceful moves and their masssive size leaves deep memories and anybody that has dived or snorkelled with these magic creatures will long for more  and many visitors to Yap return dive after dive trying to spend as much time as possible with these animals.

At the southern tip of the island we dived a number of excellent sites including Yap Caverns (5 to 35 meters), which not only provided a warren of caverns but also some fantastic wall diving. The maze of caverns is quite extensive and it makes for a great start of a dive. As you drift through the caverns you might cross the paths of a few White-tip Reefsharks. Large schools of pelagics, including barracuda and tuna, patrol the clean walls of this dive site. Not to forget the eagle ray cleaning station and all the Hawksbill Turtles in this area. 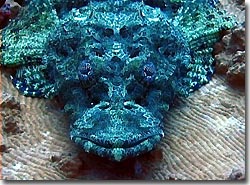 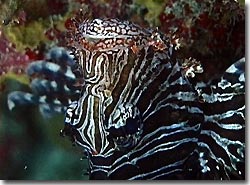 On one of our missions down South we encounterd a massive school of Humphead Parrotfish  a sight never to be forgotten as their massive silouettes passed above us (see cavern video clip).
A few of the other dives we managed to fit into our busy schedules included Purple Haze, Cherry Blossom Wall, Big Bend, and Gilman Wall. 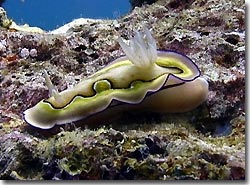 Cherry Blossom Wall is a vertical wall on the western side of Yap between 5 and 45 meters. The top of the drop-off is about 10 meters deep, and is home to both Grey and Black-tip Reef sharks. There was also a large number of unicorn fish.

Purple Haze is located north of Cherry Blossom Wall on the west side of the island, Purple Haze is a big wall covered with purple soft corals. Although we did not experience great fish life, the "purple wall" is a site worth visiting.

Big Bend (5 to 50 meters) is on the western side of Yap and represents a site with a curve in the reef line. The reef begins like a normal wall when at about 18 meters it angles downward to over several hundred meters depth. On that dive we have seen various reef fish, White-tip Reefsharks, Black-tip Reefsharks, and turtles. 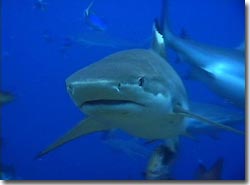 One of the non-manta attractions of Yap is its healthy population of sharks, in particular Grey Reefsharks and one morning we went out to Vertigo wall for a shark feed dive and WOW  there were easy close to 30 Grey Reefsharks homing in on the home made tuna head popsticles and we had a full 45 minutes of feeding spectacular. Plenty of Black-tip Reefsharks and a few White-tips were in it for the food as well and one particularly large moray eel positioned itself very akwardly right where everybody was grouped up watching the show. Its hard to describe the excitement of a shark feed dive and it surely is a diving activity that not everybody agrees with. 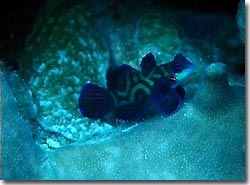 However, despite our belief that any animal above and below the water should rather be left alone and observed naturally, the shark feed on Yap was quite something indeed (see video clip).

Often overlooked when reading about diving in Yap is the fact that Yap offers one of the most amazing Mandarinfish dive sites you can find in the whole Australasian region. Unlike the Mandarinfish we saw in Lembeh Strait, Sulawesi here in Yap these unique fish can already be seen before dusk (the Mandarinfish clip below has been filmed without video lights, to not disturb the fish). 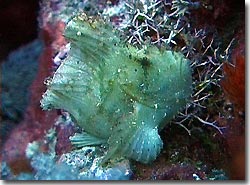 The mandarin site is only minutes away from the village of Colonia and Traders Ridge and makes for a fantastic afternoon and evening dive adventure. Watching the male Mandarinfish chase the females around the branching hard corals, seeing them feed without harassing them with a dive torch is a unique experience. We should have gone out there again as we didnt manage to observe the actual mating of the fish above the reef , but there has to be a reason to return to Yap, so let this be one of many

We truely enjoyed Yap and the great combination of diving, great cultural experiences and of course the luxurious, relaxing time at Traders Ridge.

We think it is a good idea to combine Yap and Palau in one extended dive trip as the journey to Micronesia is a long one for most people and the combination of both islands diving will leave you with unforgettable memories. 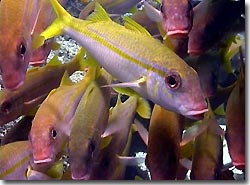 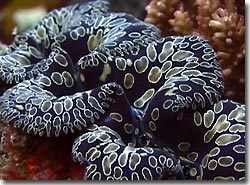