I met up with my long time friend and dive buddy Kevin Lee in Singapore. We were excited chatting about the next couple of weeks that lay ahead. Planning for a trip like this one is a little more intensive than throwing gear into a bag and jumping on the plane. I picked up the new Nikon D300 and MDX 300 housing from Sea & Sea a few weeks ahead of the trip.
Constructed a +10 diopter for the 105mm lense, bought more memory cards to download and developed my critter list. 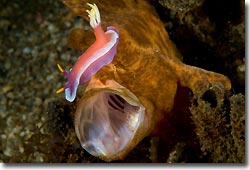 I would try to break this trip up into sections. Some days were spent concentrating on commensal critters, other days strictly for nudibranchs and frogfish.

We began diving as soon as we arrived. We put our rigs together in time for our first Cotton dive. We coined a new phrase while we were there. Cotton dives, COTN-Critters Of The Night.

We dropped down and found Stargazers, Spanish Dancers, Japanese Flatheads, Frogfish, Nudis, Pipefish and that was the first night dive. That first dive was spectacular and left me sleepless. 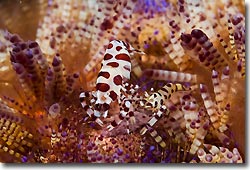 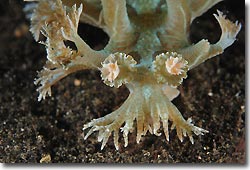 The next couple weeks flew by averaging 4 dives a day. We found rare and unusual nudibranchs,
Played witness to frogfish predation and cannibalism. Met a myriad of new friends and had a wonderful time.

Everyone questions the nudi on the frogfish photo. I watched it climb aboard and creep forward. 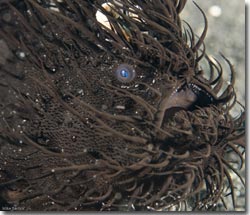 The frogfish was okay with the whole thing until the nudi started to approach its eye. Suddenly the frogfish began to jump and buck. I had to back pedal quite fast to stay in front of him. I finally figured out that perhaps the nudi was stinging him and brushed him off.

The second frogfish photo is of predation. I was setup on a different frogfish shooting in 10feet of water. Up above me a fierce rainstorm unleashed. I could hear the rain, glancing up looking at the surface, the water was pitted, lightning lit up the late afternoon water, thunder rumbled. I looked back at my subject and there was a fish in his mouth!

Realizing what I had just missed I let out a short scream. Thinking he probably won't eat for another couple hours I moved to a second frogfish nearby and waited. Will lightning strike twice? 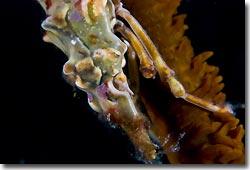 Nearly 40 minutes went by with the storm raging overhead. It was surreal. Finally a small school of cardinal fish approached, Froggies lure extended and twitched a few times. A curious cardinal fish came a little closer to see what it was. My pulse quickened. This went on for what seemed like another half hour. Looking at my gauges, 10 feet of water...No problem, I was not going to miss this shot. I waited, he lured and Finally BINGO! Cardinal fish din-din.

As ready as I was, I still nearly missed it. I was truly amazed at the remarkable speed of these guys. The frogfish gulped that cardinal fish down, nearly half its size. Amazed...I surfaced with a big smile...

We visited the outer reefs as well. Dantes wall was stunning with some rather large pigmy seahorses and Xeno crabs. 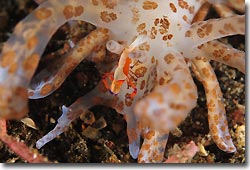 I noticed Imperial shrimp on the solar nuds and used my diopter again to take full advantage.
At ' Au Prain 2' another excellent dive site, we found some rather unusual critters. The Mosaic marionia nudibranch. Wow, talk about beautiful. My critter finder Miki, found two varieties of these guys that still have the experts scratching they're heads. We also noted that the area was littered with Sea Pens.

The following night we returned to explore the Sea pens and to look for Rhinopias. 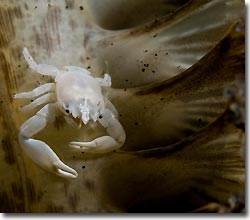 I explored these sea pens looking for shrimp, crabs or whatever else may inhabit them. Once disturbed the sea pens quickly retract into the sand. Working fast, I went from one to the next.

The third or fourth one yielded two pale white crabs. I stopped down and squeezed a few photos trying not to over expose they're pearly white carapace. I pulled out my Diopter and shot a few more. These photos are the result

I'm very pleased with the new D300. I was able to shoot at asa 250 on the night dives at an F22 stop. The ISO speeds are remarkable. The photos here are converted from the RAW NEF files without manipulation. 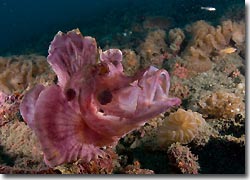 The Rhinopia was shot at the same place. However i shot this guy with my wide angle lense. I wanted the depth of field that only my 10-17 lense can give. My buddies questioned my sensibility. I said: "You'll see." I was lucky enough to find several Rhinopias that were willing to play. 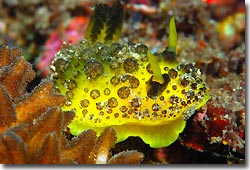 The Doris sp4 is a newly discovered species of Nudibranch. My guide this time was Deddy.
The Doris sp4 has not been described yet. Last season one was found in Anilao Philippines, and this one North Sulawesi. So far that is it. Im sure more photo's will begin to turn up... Very interesting little fellow though

The black sand on its back is not sand at all but a cryptic design which helps it to hide itself.
This thing is Bright yellow against black sand...What? Evolution is a funny thing, Doris was daring passerby's to have a taste. It was actually found in some reef structure and the photo sent the other nudiphiles into a frenzy.

I began shooting him with my 105mm lense. I excitedly raced back to the boat and grabbed my other camera with the 60mm. I snapped about 50 images from both rigs. After a closer examination I realized the notum was covered by these black sandy corpuscles, very cool. 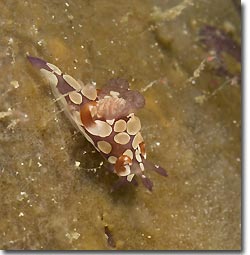 I also found the newly described Trapania scura recently discovered in Bali. Talk about hot, every dive was better then the last. Sure we had a couple slow dives but even then we would find something striking.

Stats for the trip: 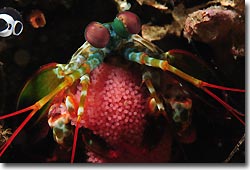 I'm planning my return in October of this year and can hardly wait. I blogged the whole experience on my website