Night dive at the Rock 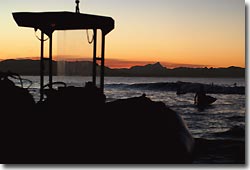 The sunset over the bay was a real treat to watch through the boat as we waited for water to lift her. We would soon be on our way past the perfectly peeling lines of swell and out to the rocks. I could hardly believe it. After years of waiting and cancelled dives we finally had a perfect evening, the last before the rocks were closed for the Grey Nurse Sharkseason.

We all knew from the day's reports that the visibility was less than good. Had it been any other time we would probably have laughed at the 2m vis report and left it for another day. I could tell though that everyone else was as keen and excited as me at this rare opportunity to be on a charter to the Julian Rocks at night.

The boat skipped over the hardly ruffled gap between the Cape and the rocks and we were there in no time, eagerly gearing up to the sounds of the sea birds settling on the rocks for the night.
I had decided that I was only going to use minimal light & try to not freak out all the sleeping fish, so I had fastened a very small torch to my camera strobe and was using that as a primary. I had a larger torch attached to my harness as a backup.

It was so amazing sinking into the inky blackness watching the plankton wriggling in the dim light. My ears told me I was getting deeper but I still couldn't make out the bottom even though I knew it was only 2 meters away.

I hovered above urchin-covered rocks. I was going to have to watch those spines. I was used to them hiding in the crevices during the day but now they were all out wandering. In fact as I surveyed the small area around the mooring chain I realised the dive was going to be about echinoderms. Not only were the urchins on the move but the feather stars were also parading, arms outstretched into the mild current carrying the rich brown soup we were diving in. 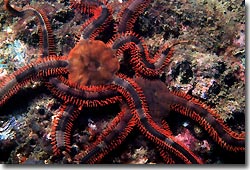 It wasn't long before I saw my first brittle star. Now I don't know about you but I get excited by new critters and this really was something new for me. I've seen brittle stars in the day tucked into crevices, stationary or with one testing arm protruding or the arms of tiny ones that seem to decorate many of my macro shots of the reef. This was different. These guys were big and on the move and boy, do they resist a torch beam. No sooner would the beam hit them and they were off, desperately seeking a crevice to hide in. I was glad of the dim beam and got used to using just the periphery so as not to scare them off.

They were still difficult to photograph but I worked with a very minimal output from the strobe, purposely underexposing the images so as to maintain the minimum light. I new I could bring the exposure up later, in comfort after the dive.

At one point I came across a large group of them, also intertwined with urchins and feather stars. The scene was too big for the macro lens with the bad vis and dim focusing light. I watched, fascinated by the behaviour as they twisted and turned crawling through one another, eventually all going their own ways.

In between encounters with the brittle stars there was plenty of other life to look at.
Wobbegongs were everywhere it seemed and invertebrates were out wandering; 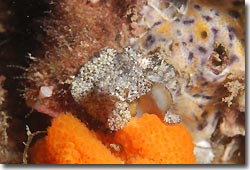 a slipper lobster, coral and hermit crabs, flat worms and tiny nudibranchs all added to the scene. We didn't swim far from the mooring line, there was no real need. So much to see and so little time.
I was surprised by the number and different types of fish that I saw. I'm not used to seeing many fish on night dives. Some were swimming about while others were doing their best to hide.We were reluctant to end the dive but Jai was waiting very patiently on the surface and it was a cold night up there. While we waited at 5 m, tiny fish collided with us constantly.

Back on the boat we all had our own story. I was surprised that some didn't see any brittle stars but it may have been related to the amount of light that they were using. I was happy to slip the beanie on as we started the run back to the pass. Cold it might have been on the way back in but I didn't notice it much. I was too busy looking at the view of the Southern Cross hanging over the Cape and the lights of the Bay from the ocean at night, something new but something that I hope to see again soon. Thanks to Sundive and to Tim & the Underwater Festival team for making it happen.