In our own backyard we had a real exciting diving/shark story. A female Grey Nurse Shark had been sighted for about a week swimming around Julian Rocks in Byron Bay with what looked like a fishing gaff sticking out of its mouth. (Photo of Grey Nurse Shark swimming with gaff in its mouth by John Natoli) 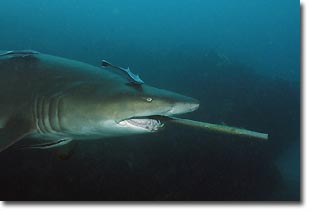 The injury was reported to authorities and yesterday Seaworld and Marine Parks authorities mounted a rescue mission to extract this gaff from the shark. And unbelievably so they succeeded with their mission, saving one of less than 500 remaining sharks - and a female too - from certain death by starvation.

Here is the story of the shark rescue mission, written by the underwater videographer Simon Hartley who was on-site when it all happened!

"I joined Sue and big Mark (from the Byron Bay Dive Centre) and (to avoid missing anyone) the Seaworld crew, Marine Parks and Fisheries aboard the Seaworld boat this morning for a rescue attempt. My job was videographer for the underwater part of the operation. All of the shark wrangling was done by Seaworld staff.

I'm please to announce that the shark was successfully caught and a large fishing gaff removed. A satellite tag was attached to monitor the sharks progress over the next few days. Fingers crossed. Diver please look out for this shark and report any sightings. It is the only shark with a satellite tag (attached to the right hand side of the animal just behind the dorsal fin).

I was really impressed with the professionalism of the Seaworld crew and the way they got on and got the job done. I don't think I'd have been able to lasso a shark on the first go, they had all the gear and the whole operation ran like clock work.

Mark led us straight to the shark on the first dive. It was in sight within a couple of minutes of descending. One diver had a large metal pole with lasso attached and two other divers trailed behind managing the rope.

I don't think I captured the moment the shark was caught, it happened very quickly and we (photographers) had been asked to hang back to avoid spooking the shark. The lasso went over the head of the shark and secured itself between the last gill slit and pectoral fins.

From that point on the fight was on to get the shark under control. Obviously there were some tense moments as the shark fought to get away. Eventually it calmed down enough to start feeding it into a purpose built plastic cage that would enable it to be held securely and safely and lifted onto the boat. The techniques and equipment used today date back to when they used to catch and display sharks. Perfect for this sort of operation. 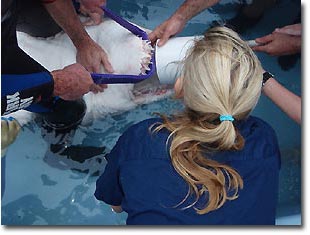 The shark was winched onto the deck and placed in a large tank where it could be provided with oxygenated water and worked on.

I didn't see too much of this part (stayed in my dive gear and out of the way) but Sue and Mark took some photo's for me on my little camera.

A plastic pipe was placed around the gaff to open the sharks jaws and allow a vet to reach down inside the stomach and remove the hook. It was a difficult operation and took quite a while.

Antibiotics were administered once the hook was removed, samples were taken and the satellite tag was attached. The tag will automatically detach if the shark dies (to alert fisheries) but if it survives it will continue to monitor it's movements for a few days.

Nick Otway was saying the shark wasn't bleeding which was a good sign. I think the whole operation took close to half an hour but I could be wrong.

The shark was placed in a sling and returned to the water. We were asked to follow the shark for a while and make sure it was OK. When the sling was opened the shark swam out fairly sluggishly as you would expect. It didn't look well (pale and eyes looked odd) but swam off gradually from where we were anchored, across the nursery to the north. 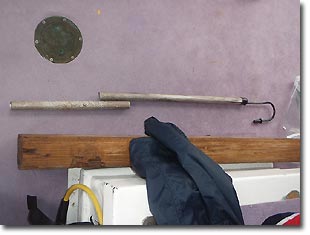 Around about the turtle trench the shark made a bee line for the surface (near the codhole mooring) and took a big gulp of air. Too fast for me to follow with my drysuit. It then descended again and started heading toward the codhole.

Anticipating where it might be going I put on a burst of speed (paid for it later) and got some footage of the shark coming out of the trench wide of the codhole and disappearing out to the east (past the GNS listening station).

I may have caught a brief glimpse later as I ascended but wasn't sure. I was pretty much spent. All the CO2 I'd built up in the swim and lack of sleep caught up with me and I started to feel really anxious. Gave one of the others the thumbs up and ascended to a comfortable depth for the long swim against current back to the boat (curse that drysuit drag). Everyone was over the moon but the Seaworld guys and Mark got on with the next job (replacing listening stations). Matt ferried us back to the beach in the Marine Parks boat.

Seaworld have the footage I took so should be something in the media next few days. If anyone has the opportunity to record any press coverage (tomorrow night at the earliest) I'm really keen to get a copy for marine awareness presentations shark talk I'm working on.