Australian Sea Lions - what a buzz! 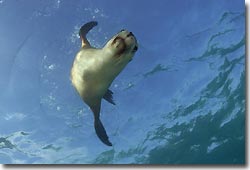 On an earlier trip in February 2008, with the team from Rodney Fox Great White Shark Expeditions, we had ventured only 2 hrs out to sea when the 'Princess II' experienced problems and unfortunately forced our immediate return back to Port Lincoln. The boat required some extensive work to repair a problem with oil lines and so our much-awaited trip had to be cancelled and our team of 4 were offered a return trip at a later date.

So here we were, back on the boat in July 2008 ... this time we were looking good, riding in smooth seas with light winds and a beautiful clear sunny day ahead of us ... and we were ready to catch our first glimpses of Great White Sharks.

It was around midday, when Andrew Fox suggested that conditions were perfect for a brief stop over at Hopkins Island and take a dive with Australian Sea Lions. Of course, all 12 guests on the boat met this suggestion with much enthusiasm and in no time we were geared up and ready - some were diving and some were snorkelling. Our brief was uncomplicated, but very specific ... "We will send somebody over to attract the attention of the sea lions. When they come over to you, they will try to draw you away from the bay and around the corner of the island. Hold your ground and don't let them lead you astray ... they will come back to you. Photographers note: the sea lions will position themselves between you and the sun. This is a defence strategy, which could make it difficult to photograph the sea lions". 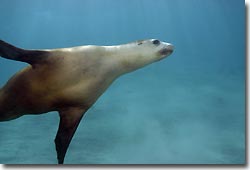 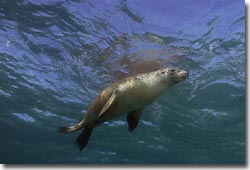 Geared up, air on; I backward rolled over the side of the inflatable boat. I was still fiddling with my strobe arms on the seabed at 4 mtrs, extending them fully out when I was 'buzzed' by the first of many sea lions. 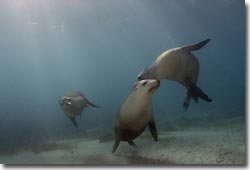 Wow ... they were everywhere - above, below and around us. 'Buzzing' me from top to bottom, I didn't know where to look next. These guys seemed to be just as excited to see us as we were to see them ... and in their state of excitement, they were looping, swimming in figure 8's and constantly on the move and I felt myself spinning around and around trying to catch a glimpse and lock focus on these beautiful animals.

Well sure enough, they tried to lead us out of the bay. The other divers followed. 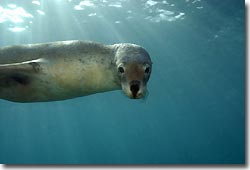 Remembering Andrew's words during our brief, I held my ground ... but only to be left all alone - with no divers around me and certainly no sea lions. Where had they gone? Should I have followed them? But didn't Andrew say "Don't let them lead you away from the bay"?

I did stay all alone for what seemed an eternity (maybe 3 - 4 minutes) and thank god I did because just as was indicated in our dive brief, the sea lions came back and I had them all to myself.

However this time their excitement was more contained and they came back with an intriguing curiosity, wanting to check me out as much as I was wanting to observe them in their natural habitat. 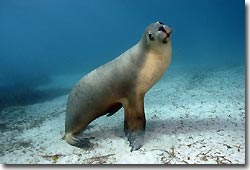 The Australian Sea Lion is a species of sea lion that breeds only on the south and west coasts of Australia. These animals are fascinating. Their inquisitive nature almost gives them a human like quality.

One look into a sea lion's eyes and you gain a sense of emotional connection that is not experienced with other animals.

Once this heartfelt connection is made, it is impossible to have anything but complete admiration for them.

We were on a shark expedition to cage dive with Great White Sharks off the Neptune Islands ... and this opportunity came as a complete and unexpected surprise. This brief stop over at Hopkins Island turns out to be one of the most exciting dives I have had the pleasure to experience.The rest of the trip, i.e. the cage diving with Great White Sharks, well that's another story for some other time ... needless to say we have been invited back on another 'gratis' return trip to Neptune Islands ... perhaps it will be a case of '3rd time lucky'. 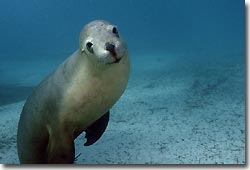 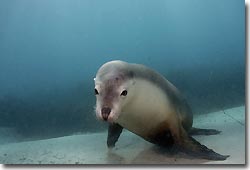 But as for the sea lions, I would do this trip all over again just for these absolutely fascinating animals. They are simply amazing ... not to mention adorable ... 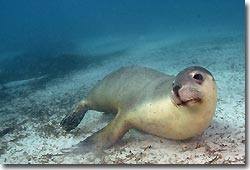 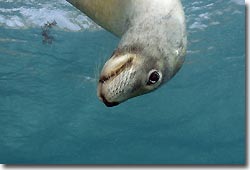 And a little cheeky as well ...God love 'em!