The PADI Project Aware International Clean-up Day activities up at the Tweed River went well. For those who were not aware (no pun intended) of the event it was organised by Tim from Kirra Dive on the Tweed with participants also from Anaconda (outdoor sports) and Southern Cross University (Tweed campus staff and students mostly).

There were over 30 divers involved directly with the cleanup and at least 40 or so divers out and about on the day. 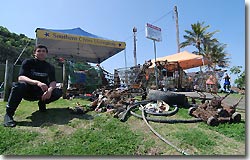 I should also point out that this was an international event. Shops all around the country and the world organised cleanups of their local dive sites. Another shop from Tweed organised a cleanup at Cook Island.
In excess of 400 kilograms of refuse was collected in a 150 or so metre stretch of river bank around the Jack Evan's Boat Harbour. 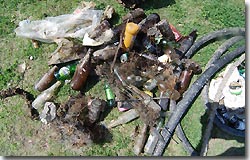 As far as my involvement on the day goes, I got up there around 9.45 am after a brief stop off at Kirra to discuss what was happening. I wanted to get in early and do my bit because I needed to be out around 11.50 when the press arrived. Specifically I wanted to bring up some of the heavier items if possible and remove some plastic piping from underneath the boat harbour.

When I arrived there were already a small number of trolleys and other debris that had been recovered and quite a few divers already in the water or gearing up. Fortunately Michael Bugden had organised for the Tweed Volunteer Marine Rescue to open up the access gate to the harbour/pontoon, this was going to make life much easier.

I dropped down with a hack saw and lift bags and cut up the piping.  Turned out to be easier than expected so after taking up the pipe I went back down to free up and lift two trolleys for the folks waiting on the pontoon (so much easier than having to swim them back to the steps against current). After that Mike, Tanya and I did a general cleanup around the boat harbour. We finished up by bringing up an illegal mooring and chain someone had put in and a large truck tyre. 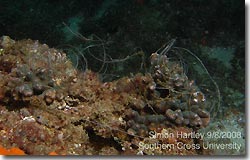 I should add a general disclaimer, using lift bags has a lot of associated risks. I've had a lot of training (including commercial diver training) and experience in using lift bags to lift large items. Generally speaking DO NOT attempt to lift large objects underwater, certainly don't use your BC's to lift items. If you have been TRAINED to use a lift bag I've heard it suggested that 10kg or a divers weight belt is the largest item recreational divers should lift. I don't know. It is far better in all cases to get a rope and have someone haul an object up from the surface once you are safely out of the way OR just report where it is and leave it to someone who has the training and equipment.

Kirra had organised a BBQ for participants and there were marquise for Kirra, Anaconda and SCU. The whole river side was a hive of activity. After doing an interview I got some photo's of the debris collected so far (I have video and stills of the refuse in situ as well, a student is doing a video on marine debris for a project at SCU). 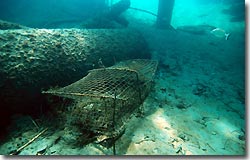 A bit later Mike and I jumped back in to get the last tyre we'd seen and a few more bits of tackle. We hung around for a little while after most people left because we were both concerned about trolleys ending up back in the water. Tim went through and recorded all the material that had been collected and took most of it away in their van. I believe the trolleys were to be collected and disposed of by Woolworths. I believe more events like Saturday are planned in the future.

I wanted to finish by mentioning that while I was in the car park just before I left I started picking up cigarette butts. After several handfuls I realised that everywhere I looked on the ground there were butts. Cigarette butts are particularly dangerous to turtles. On the drive over to Mike's place and on the way home I noticed one shopping trolley after another. How much of that will end up in the river or ocean. There's a long way to go but the first steps are being taken, raising awareness. 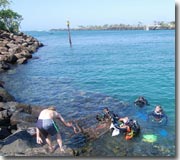 I'd encourage divers to pick up and dispose of any cigarette butts they find at the water front or underwater and any small items of waste, especially fishing tackle and other plastics. Also, I know people might think items like shopping trolleys are fairly innocuous but remember that most start off coated in plastic and with plastic wheels and other parts. All this plastic ends up in the ocean and water ways as the trollies break down. Ingested by fish, turtles and other marine life. Report large items so they can be removed safely.
Big thank you to Tim and others involved in the organisation of this event, great job.