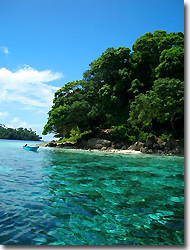 The island of Ambon, part of Maluku Province located in the Eastern parts of Indonesia between Papua and Sulawesi, is not on the travel schedule of many people, however for serious divers this is a destination offering diving away from the crowds as well as some amazing history and culture.

There are a number of reasons why Ambon is not yet being affected by mass tourism with its remoteness only one of them. Some religious conflicts in the late 1990's and early 2000's also thwarted its potential development as a tourist and dive destination.

Besides its remarkable diving, Ambon and its surrounding little islands offer a combination of a large variety of traditions, reflecting the mix of people with Malay origin intermingled with Indian, Chinese, Arab, Portuguese, Dutch and English immigrants and of different religions spanning Hinduism and Buddhism, Islam and Christianity. 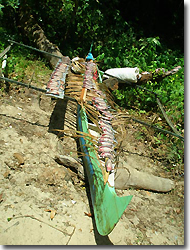 destinations is the sheltered Ambon Bay, a world-class muck diving area and even home of a massive and well preserved shipwreck. All dive sites are within easy reach of the few dive centres that exist on the island.

Locals are genuinely friendly and us 'white faces' which are still reasonably rare often attract the attention of the local children who are excited to look, feel and love to have their pictures taken, even more so if they are shown the results (bless digital photography). Few speak English, though some understand and speak a few words. Attempt a few Bahasa phrases such as Apa kabar? [How are you?] and the warm and welcoming people of Ambon smile and open up more.

Like elsewhere in Indonesia, Ambon has far more sea than land, a good thing for a diving traveller. With some sea grass beds and mangroves, the coral reefs provide the more interesting diving. The coral reefs around Ambon are fringing reefs and compared to many other destinations they are still in pretty good shape. 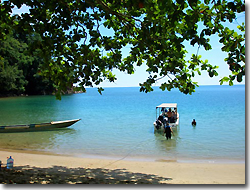 Maluku Divers, located on the South coast of Ambon was the base for our Ambon dive adventures. The dive center is quite well organised and at the time of writing offered two dive boats that generally went out for three-dive day trips. 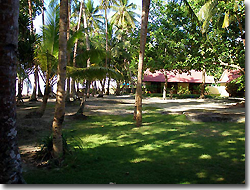 Up to 10 divers plus crew can be accommodated on Maluku Divers' modern and fast boats and the diving day quite often lasts 8 hours or more with Indonesian style lunch and inter-dive snacks provided.

The dive centre itself offers basic diver accommodation with small but comfortable rooms all with air condition, most with shared bathroom facilities. Sleeping there is a little noisy as apart form the early morning wake-up call from the dive centre rooster, it is also located on the main road that leads around the island.

Food at the dive centre is local and quite excellent with breakfast and dinner included in all diving packages.

For those who prefer less noisy, more upmarket accommodation, Maluku Divers Resort is only a few hundred metres away, offering large and modern resort style rooms with ensuite bathrooms, hot water and excellent well-presented food. Nights are relaxed under the Ambon moon while holding a drink on one of the resorts beach lounges and glancing over the vastness of the Banda Sea.

What struck us first, was the fact that Ambon's fringing reefs have masses of sponges as well as hard and soft corals. 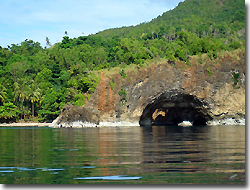 On all of our reef dives we saw impressively massive barrel sponges. The large ones are often covered with many featherstars in all colours. Various sea anemones and sea fans were commonly seen on our dives. Sponges are the favourite food of many nudibranchs and flatworms which makes the Reefs off the coast of Ambon a must for critter lovers. Ascidians (sea squirts) like the Splendid Blue Sea Squirt are commonly found too.

Hukurila Cave, a dive site under two rock arches that can be seen from the surface leading to a swim-through hole covered in sponges and coral was one of the more memorable dive sites. Descending into the cave a school of dogtooth tuna emerged from the depth and disappeared into the blue. Another site called Mahia provided an opportunity to explore an interesting arch and to dicover the rich coral and fish life on either side. 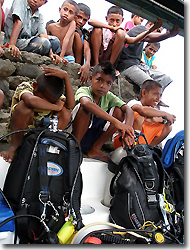 A little further away, to the North West of Ambon lies a small cluster of three islands called Pulau Tiga (tiga means three) which is a must-do trip when diving Ambon.

Diving around Pulau Tiga is like diving inside clouds of fish. Pushing your way though massive schools of Red Tooth Triggerfish feels like you are entering a cave with millions of bats, all suddenly deciding to leave. Here is also where the few larger fish can be encountered and apart from the reasonably common encounters with

Napoleon Wrasses, we saw an Eagle Ray and a Black Tip Reef Shark that day. One of the highlights that day was definitely the small pod of Bottlenose Dolphins that checked us out when diving Pulau Tiga; indeed a rare occasion and only the third time I've ever encountered dolphins on scuba.

Ambon Bay is famous for its Frogfishes (or Angler Fish). Frogfishes are masters of camouflage and not easy to spot. With their unique 'fishing rod and lure' attached to the tops of their heads they tempt small fish within striking range. One species for example, the Painted Frogfish, has a lure that looks somewhat like a prawn. We we lucky to find several species such as the Warty Frogfish, Hairy Frogfish and Painted Frogfish. Using colour to identify

Frogfish species is always somewhat difficult as several colour variations exist within the species. Unfortunately we missed finding the new frogfish species which had been photographed for the first time only recently and caused quite a stir in the diving media. A good enough reason to return!

Ambon Bay is full of surprises, one of them the new secret dive spot `Rhino City` which as its name suggests is home to a whole hand full of different colour lacy scorpionfish (Rhinopias aphanes). We are not allowed to say where it is, but it is certainly worth the trip.

You can also find a variety of other scorpionfishes. Most will know that they all have venomous dorsal fin spines and they are well camouflaged .... so be aware. We saw plenty of different species including various lionfishes, the Devil Scorpionfish and a few Stone Fish. Other critters you will encounter when muck diving include the Seamoth that is well camouflaged and requires, like most critters that live on inshore sand and rubble bottoms, a good eye to find.

Don't go home without diving under one of the piers in the bay, Air Manis, a fantastic dive that offers a good mix as it has a variety of critters as well as massive schools of fish circling under the pier - great subjects for photos and video.

Ambon Bay has a shipwreck of a Dutch WWII cargo ship that was sunk by a single bomb into its chimney in the 1940s (well, at least that is one of the stories ....). This 100m long wreck lies upright a slope in sandy water. The top of the wreck is between about 12 and 25 meters below sea level with the lower parts of the wreck going to close to 50 meters.

The wreck is still in good condition with some coral growth and pretty good fish life. Being in the base of Ambon bay, the visibility is often OK but generally not fantastic.

After a week diving 3 dives a day, we still had the feeling, there is much left to explore in and around Ambon and we hope to return to what we believe will become a must-do dive destination many times in the future.

At the time of writing, four separate airlines operate daily flights to Ambon, Indonesia, with schedules through Makassar from Bali, Jakarta and Manado. From Australia the easiest way is probably to fly via Bali. We chose to come in via Jakarta and return through Bali.

The average temperature is 27° C, rarely sinking below 22° C. Rainfall can be heavy, especially after the eastern monsoons, and the island is vulnerable to violent typhoons. The dry season (October to April) is coincident with the period of the west monsoon. Maluku Divers closes down during the wet, so make sure you plan your trip with that in mind.