My ultimate diving dream is to meet orcas underwater. While I am waiting for this divine meeting with sea giants, I am fascinated with tiny graceful creatures called Hippocampus. Their name derives from Greek for seahorse and literally translates as horse sea monster. 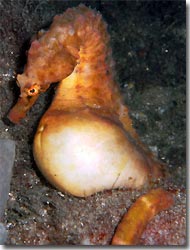 Its appearance is anything but monstrous - graceful turn of its chiseled head, pouty snout and elegant vertical posture made them one of the most beautiful creations of God and evolution. When you know where to look you could approach them quietly and if you are good with your air management you could spend hours just lying there and watching incredible life of these fish to unfold in front of you.

Our favourite place to watch seahorses are sponge gardens at Bare Island, Sydney. Once they get used to your presence (takes at least half hour of complete stillness) they go on with their usual life. A huge part of their life is dedicated to feeding (mysid shrimp and other edible delicacies) - seahorses just sit and wait for food to swim by. Seahorse's pouty snout works as a powerful vacuum cleaner sucking in a passing prey. You can even hear gentle clicking sounds when they feed. The other important part of their lives is dedicated to social life and reproducing. We closely observed Australian Big belly seahorses and four of them became a part of our circle of friends.

Those who read this are well aware of the gender-role reversal in seahorses and in no way I am trying to impart any knowledge. This is rather a humble attempt to share unforgettable and wonderful moments of being privileged to observe these fairy-tale beautiful creatures. This foursome consists of one male and three females. Male and two females have yellow color with brown droplets and the third female has off-white creamy color.

Their irises are heart shaped which adds to their enigmatic beauty. The site is shallow so we can comfortably lie there still for more than two hours. Before we started to observe our four seahorses, we thought that they are monogamous and form pairs for life but our first session underwater puzzled us. Two females and a male sat on the same stalk of a yellow sponge and from time to time females changed positions. One female would get closer to the male and start touching his tail with her own and then the second one would gently squeeze her farther away from the male and take her place. This elaborate and gentle tug-of-war continued until we were running out of air and had to ascend. When we visited our friends again the next day they were all sitting on different sponges but still very close on to each other. On our every visit we noted their position and got an impression that the male has a close relationship with each female - by now we could easily distinguish all of them and even noticed difference in their personalities. And then the male's belly started to swell... 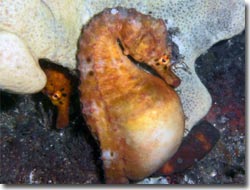 It was obvious that we missed the moment of conception and to be honest we would not want to intrude because by then we grew very fond of our friends and shared their jealousy and sympathies. We watched his belly grow and in three weeks time it was enormous and much lighter in color. The male was virtually lying on its side, his breathing was labored and shallow, and the opening in his belly was wide open. One of the females was on the nearest sponge. The two others sat not far away but neither approached. Heads of all three females were turned towards their very pregnant male.

Nothing has happened that day but all scenarios played up in our minds. We remembered that a seahorse could die if his babies die inside him, or he could be so exhausted from giving birth that it could also cause his death. Next day we checked on him and were stunned to see that his belly gotten a bit smaller; probably he had given birth already. The female who sat near him yesterday was sitting on the same sponge as the male but now she was looking somehow sheepish. We then noticed a tiny wormlike wriggling out of the male's belly opening. Our seahorse was in labor! He was closely looking at his baby's tail and making some kind of sucking or puffing movements with his snout. It looked like he was trying to help his baby by gently sucking him out. His belly was flexing and relaxing; oh, those bittersweet pains of childbirth!

It took an hour for the first baby to get out and disappear in his new huge home and immediately there was another wriggly tail trying to emerge. As time progressed, more and more babies appeared, now in small batches. They did not acknowledge their parents neither parents were too keen on their parental ties. We had to interrupt our reverie and ascend. The day before we lost our Sealife camera and now, we would have given our arms for one. We raced ashore along divers' cars asking if anyone has a spare camera but alas... However, 'Abyss'- the best dive shop in Australia was true to its reputation: Peter Letts lent us his own camera but we were too late - when we returned to our seahorse the noticeably slimmer father was sitting quite far away from his girlfriends, probably vowing 'never again'. 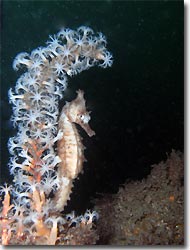 Just several days later, his three amorous females surrounded him again. And everything started over again - females fleeting from sponge to sponge, simultaneously approaching their mate and gently touching him. We were lucky to be near when he was giving birth again in late February and this time Tomas has captured many precious moments on our new camera.

It is not only us that are so captivated with seahorses. The first mention about them are dated back two thousand years ago and from ancient Greeks and Romans seahorses were always present as a symbol of beauty and grace. The sloop 'Seahorse' was pride of Great Britain's naval fleet in 18th century. Silhouettes and images of seahorse grace oil masterpieces and coins, coats of arms and lithographs. Seahorses inhabit many fairy tales and legends.Today, millions of seahorses are being ruthlessly killed for different purposes - Chinese medicine, perfumes, and souvenirs. Pharmacists of China, Taiwan, Korea, Indonesia, and Singapore get more than 20 million of seahorses every year and demand grows incessantly. Even Australia imports this 'medicinal resource' which sells well above 1000 dollars for one kilogram and still the demand for 'natural Viagra' continues to grow. Seahorses are being caught and held captive in aquariums and only the tiniest part of caught seahorses is destined for studies by marine biologists.

When you next admire seahorses underwater, take your time enjoying their ethereal beauty because they might not survive humans' greed for much longer.