Jason, alias 'Underwater Irish' as he came to be known on the 'Princess II', celebrates his birthday 70 kms out to sea off the coast of South Australia. The location is North Neptune Island and at the age of 28 Jason is now fulfilling a boyhood dream. At the impressionable age of 15 Jason had a sketch of a great white shark, one that he drew himself, tattooed to the side of his calf muscle and vowed that one day he would see the 'real deal' in the flesh.

It is early morning, June 16th, 2009 around 7.30am, as the Rodney Fox Shark Expedition team heads out to sea on the Princess II with Jason and 11 other passengers all anxious in anticipation of whether their expectations of sighting a Great White Shark are to be realised. The voyage from Port Lincoln to North Neptune Island will take approximately 5 hours as we make our way in very mild conditions with slight seas and wind speeds no greater than 15 knots.

Rodney Fox tries to fit in 5 to 6 trips a year and we are lucky enough on this trip to enjoy the company of Rodney himself. Travelling at a speed of 8 knots we have the occasional sighting of dolphins, which keeps some of the passengers amused whilst others sit around chatting with Rodney and the rest are eagerly making last minute checks and adjustments to camera and video gear - of course, I am one of the latter. 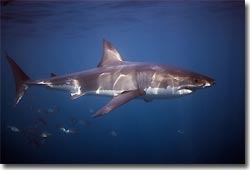 As we near Neptune Island, the anticipation grows .... 'When will we sight our first shark?' How long could it take?' Will we be lucky enough to see any at all?' and 'How big do you think the sharks will be?' .... lots of questions, all in search of answers.

We arrive at a time when lunch is normally served on the boat, but nobody is interested in eating. The skipper, Robbie, positions the boat in a sheltered little bay known as Main Bay, just off North Neptune West Island. From here we can see the New Zealand fur seals - some lying on the rocks and others swimming about. This is Great White Shark territory. Robbie signals to drop anchor and so Andrew, a young deck hand, and Jezza, who is also the cook on the boat, get straight to it. 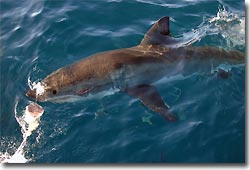 Immediately the anchor is set, Robbie, Jezza and Andrew waste no time in getting around to the stern to untie the 2 shark cages, getting them into position and then start chumming the water to attract the first sharks. Whilst this is all happening Jennifer, best known as 'Tinker' Taylor, gets out the video camera to start recording a trip video for the passengers.

Within 7 minutes of the chum first seeping into the blue waters of the Southern Ocean, Jason's boyhood dream becomes reality, as the first Great White Shark appears astern. The excitement explodes when a second shark appears moments later chasing 2 young fur seals across the water. Little did we know, from this moment on, we are to enjoy non-stop shark activity for the entire 3 days?

In no time, the first 4 passengers immerse themselves into the surface cage. A shark wrangler stands on the duckboard, just behind the cage, with a great chunk of tuna tied to a rope and lures the sharks towards the cage. The very first sighting of a GWS heading straight towards you with its mouth wide open is a sight one can never forget. Someone asked me 'Is it exhilarating or terrifying?' Exhilarating it is - unbelievably so.

My first stint in the surface cage is nearly an hour long but it feels like only 5 minutes. All afternoon, we are in and out of the surface cage swapping positions and taking turns. It didn't matter if you are in the cage watching the sharks underwater or standing on the back of the boat waiting for the shark's 'head and teeth' to breach the surface in a sudden lunge to steal the tuna bait, the activity continues to be non-stop, thrilling and breathtaking. 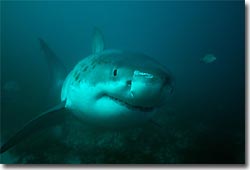 It didn't really matter if you were in the cage or on the back of the boat. In total, we sight 5 different sharks on the 1st day, ranging in size from 3.5mtrs to a large female suggested to be 5mtrs in length.

Day 2 - time to get some action in the submersible cage .... the only place in the world where this can be done. Of the 12 passengers, only 4 of us are certified divers and we are all very keen to be sent 20 mtrs down to the bottom of the ocean to capture the behaviour of the Great White Shark at depth. Not being lured by a slab of tuna, there are no gaping mouths swimming straight for us. Here we find the sharks to be calm and inquisitive .... showing as much interest in us as we are in them. 3, 4 sharks constantly circling us occasionally giving the cage a little nudge almost as if they are trying to determine whether we are alive or inanimate. Coming in from the blue water column, arrives 'Big Muma' 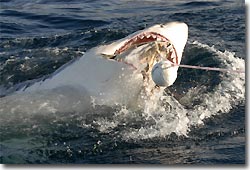 And then, coming in from the blue water column, arrives 'Big Muma' - a 6mtr (or very, very close to 6 mtr) monster female that has a girth the size of the average family car. She is massive .... and looks more like a submarine. Every shark we have seen up until this moment now pales into insignificance. Like most people I had seen the movie Jaws, but I always thought that the movie was 'far-fetched' in my opinion. It seemed the shark that was portrayed in the movie was far too big to be realistic - I now know better. 'Big Muma' puts reality back into perspective. She simply takes my breath away.'Big Muma' cruises past the surface cage 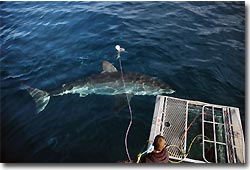 On the surface, 'Big Muma' makes a regular appearance throughout day 2. The sight of her large dorsal and caudal fins slicing the water sends a shiver down my spine. Rodney Fox remarks the shark is one of the 3 biggest GWS's he has seen in his 42-year history of shark expeditions. That makes us feel special. As I hit the pillow that night and close my eyes, all I can see is the vision of Great Water Sharks imbedded in my mind. Rodney Fox explains that this happens to many people after a day of constant focus on this superb animal.

Day 3 - the action continues all day. 'Big Muma' still hangs around and Jonny - a 5 mtr male, makes an appearance. In total we sight 13 different Great White Sharks on this trip. Finally, it's 4.00pm and time to head back to Port Lincoln. 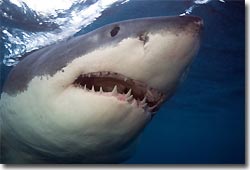 We are all a little sad for having to leave the sharks back at Nth Neptune Islands and what has been an awesome 3 days, but at the same time we are ecstatic to be taking home the memories of an adventure that will never be forgotten. Non-stop shark activity for 3 days

The crew consisting of Jennifer, Robbie, Jezza and Andrew have been marvellous and have very much added to making our trip an awesome experience. The trip video, filmed and edited by Jennifer 'Tinker' Taylor will take pride of place in my DVD collection, which reminds me, I'd better make another copy of it, as it will be well worn in no time. 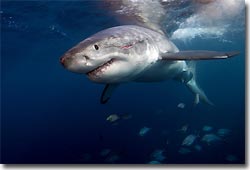 The opportunity to enjoy the trip with Rodney Fox on the boat and share the many experiences he is able to recount has also been very memorable and a major highlight for all of us on board.

You don't have to be a diver to enjoy this trip. The Rodney Fox Shark Expedition experience is one to be enjoyed by all - young or old, above and below the water, diver or non-diver. For all of us on board, this was an all-time ultimate thrill .... and one that also witnessed 'Underwater Irish' realise a boyhood dream.