Story and Images by Tim Hochgrebe

As the plane takes off from Kuala Lumpur to Tawau I think of one of my favourite songs by Australian singer songwriter Christine Anu 'The monkey and the turtle' ... that is where we are heading, the island of the turtles and the land of the men of the forest, the Orang-Utans of Borneo. Our main destination is Sipadan Island, a dive travel mekka generally near the very top of most people's dive destination dream list and my list has been no exception. With great anticipation we embark on this journey to this magical island off the East cost of Sabah. 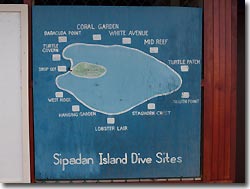 There is always the inherent danger of being greatly disappointed when the expectations are high and I brace myself for a possible disappointment. I have heard some good and bad reports and in my opinion this trip could go either way.

There is quite some history to the diving on Sipadan Island - luckily we are accommodated at Borneo Divers which is the dive resort of Sipadan diving pioneer Clement Lee, a man who still shapes Malaysia's dive industry with great passion on a day-to-day basis. Some of the history needs to be part of this story as it is important to understand the current intricacies of the permit system to visit Sipadan Island.

The diving off the island of Sipadan was only discovered about 25 years ago as legend had it amongst local fishermen that a giant octopus inhabited the depths of the waters surrounding the island and not many dared to go near it. Eventually however it was discovered that unlike the shallow reefs around most of the other islands in the area, Sipadan rises 600m from the oceanic seabed which is the main reason for its attractiveness as a diving

Located at the heart of the Indo-Pacific basin, Sipadan is now well known as one of the richest marine habitats in the world. Home to more than 3,000 species of fish and hundreds of coral species it is reputedly a diver's paradise. For those that have heard about Sipadan before, most will remember tales of the abundance of turtles, but it is not until you dive there, that the true scale of this claim becomes apparent.

Politically Sipadan is difficult territory as in the past, the island was at the centre of a territorial dispute between Malaysia and Indonesia and it took until the year 2002 for the International Court of Justice to award the island to Malaysia. Diving became the major economic driving force in the region to a point where in 2004, the Government of Malaysia ordered all dive resort operators on Sipadan to remove their structures from the island to protect the fragile marine ecosystem of Sipadan for future generations.

By 2005 no tourists were allowed to be on or dive near the island between 6pm and 6am. As it stands as I write this story there are currently only 120 divers allowed to purchase a roughly A$20 permit to snorkel, dive and go onto the island each day and there are more than a dozen resorts with droves of divers keen to explore legendary Sipadan. Rumour has it that numbers might be increased or 1/2 day permits issued to allow more people to enjoy this very special dive spot - and all agree it needs to be protected for future generations.

These days most of the dive resorts are located on Mabul Island, which is the closest island to Sipadan and the boat trip in the morning takes anywhere between 20 minutes and up to one hour depending on swell, wind and the size of the engines ... and I can't wait to get in the water for our first dive.

Once we fulfil the permit checking formalities we are only minutes away from Barracuda Point, one the most famous dive sites on Sipadan and as the name suggests I hope to find myself filming up into a giant swirl of circling barracudas with no one else's bubbles in the picture.

It seems that Barracuda Point never disappoints and before we find ourselves surrounded by a swirling mass of barracudas we have to pass literally through one of the largest schools of Jacks or Big-eye Trevallies I have ever seen. They are coming from everywhere but despite the chaos of fish, they all seem to know where they are going. The current is generally pretty strong at the point where the barracudas hang out - and while I battle against it to stay amongst these fearsome looking fish for that little bit longer, they remain stationary ... effortlessly ... gracefully.

The tide is high on our morning dives and our guide tries to calm our excitement with 'not many turtles on this dive, it's high tide'. Despite this we still encounter at least half a dozen Green Turtles and the occasional Hawksbill Turtle on the morning dives, but as we return to dive the Hanging Gardens after lunch I understand what he meant. I think 'turtle bonanza' would be the only expression that describes our first afternoon dive. Every crevice, every ledge has a turtle resting in it, looking out into the blue there are turtles as far as your eyes can see. I didn't start counting but hundred turtles in one low tide dive at Sipadan seem no exaggeration.

To top things off just at the end of our fourth dive for the day as we hover around the colourful reefs close to the surface I discover a bunch of male turtles chasing a single female trying to form turtle-double-triple-deckers like we've all seen them in documentaries and postcards ... from Sipadan ... go figure. It's hard to let go and climb back onto the dive boat for the trip back to Mabul - but the day has come to an end and I understand finally what the hype is all about.
It come as no surprise that the late Jacques Cousteau called the island of Sipadan 'an untouched piece of art' and I was one of the lucky few allowed to visit the island multiple times on my trip, each trip a very memorable dive day and it's not only turtles that make the diving days at Sipadan exciting.

White-tip Reefsharks and even the occasional Grey Reefshark swim along the deep walls of Sipadan and hundreds of species of colourful reef fish seem always out in abundance. Large schools of Pyramid Butterflyfish, Red-toothed Triggerfish, grazing Surgeonfish and shiny Batfish are literally everywhere. Unfortunately we are slightly out of season, but I keep looking into the deep blue as there are frequent sightings of hammerhead sharks and whale sharks around Sipadan. However, as a videographer I often prefer to hang out shallow and capture life in natural light and Sipadan has plenty to offer in the shallows. Healthy reefs with myriads of orange and pink anthias, cleaning stations and always lots of colour.

As a result of the permit system, the normal dive trip to 'Sipadan' these days will involve much diving around Mabul, Kapalai and surrounding island as well which is considered more of a muck diving area.

The reefs around Mabul are generally very shallow but there is some excellent diving, especially if you are into hunting for the more elusive critters; Yawfish with eggs in their mouths, spearing mantis shrimps, big cuttlefish and some excellent nudibranch action.

Unfortunately the Flamboyant Cuttlefish did not want to show itself to me which just means there has to be a revisit of this area in the not to distant future. Juvenile Ribbon Eels hide amongst some of the muddy reef slopes and wrecks that have been scuttled around Mabul and Kapalai. 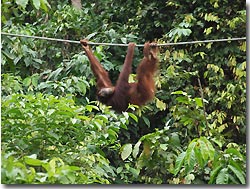 The resorts are doing their best to 'grow' and maintain a number of artificial reefs around the islands. And then there is the old 'oil-rig' the Seaventures dive resort under which the diving is supposedly excellent as well but we never made it due to other commitments.

Sipadan certainly deserves its fame and I already can't wait to return, but before I return home there is still the Orang Utan rehabilitation centre in Sepilok and Mount Kinabalu to visit. But that story should be left to the landlubbers although I think it is an excellent idea to combine the visit of the Orang Utan sanctuary with your diving, if you have already made the journey to the 'Land below the Wind'.

There is never enough space for all the impressions - please watch the slideshow below. A series of filmclips is coming ... so come back for more!

Green Turtle Against the Sun

Green Turtle Against the Sun