For about a decade now Raja Ampat has been mentioned by pioneering divers as one of the last frontiers of unspoilt diving and many believe diving Raja Ampat represents the pinnacle of marine life diversity possible on this planet. For us, diving Raja Ampat - an area in West Papua in far Eastern Indonesia - has been on our list of 'must-do' trips for a long time.

The Raja Ampat archipelago covers 4.5 million hectares (about 50,000 square kilometres) and is believed to have more species of coral and fish 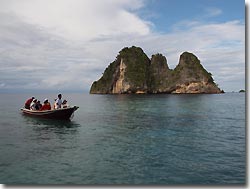 than any other place on earth: in excess of 1,300 species of reef fish and 500 soft and hard corals. This expansiveness of the area and dive sites makes it ideal to be discovered via liveaboard. Having said this, although we covered different parts of this immense archipelago, after one trip there is much more left to discover.

Having arrived in Sorong via Jakarta we were picked-up at the airport by staff of the Arenui, a brand new floating dive resort that classifies itself as Boutique Liveaboard. The Arenui, which was to be our base for the next eleven nights, had only been launched very recently in November 2009. During the time we explored the archipelago it offered a superb place from which to enjoy the unrivalled marine biodiversity and amazing environment below and above water. 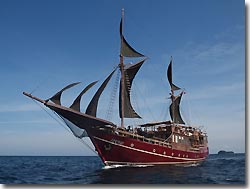 The Arenui is a very beautiful ship - built mainly from recycled timber sourced from many different areas of the Indonesian archipelago. We were surrounded by intricate pieces of art and traditional woodcarvings and with only 9 other guests on board, the 21 staff made the journey a very luxurious one.

Guest from Australia, England and the USA with a mix of ethnic backgrounds including Italy, Mexico, Indonesia, Taiwan and Germany were a blend that matched the cuisine on the boat. Each of the lunches and dinners had three to five courses with fantastic local and international dishes that one could easily find in a top restaurant. Our typical days involved a light breakfast prior to our first dive, a fantastic cooked breakfast prior to our second dive that was followed by a delicious lunch, and between the afternoon dive and the night dive there were more snacks - most days including yummy cakes - and the day finished with an a-la-carte dinner. Naturally most nights this was followed by a beer or two on one of the top decks talking about that day's dives.

Submerging in the waters of Raja Ampat it becomes immediately apparent that the reefs are very much intact with some of the best tropical diving to be found anywhere.

In very few areas illegal fishing has damaged habitats and has affected some reefs surrounding some of the villages of the about 35,000 people living in widely scattered coastal villages. One is not likely to dive these very, very few areas given the abundance of beautiful dive sites to choose from. 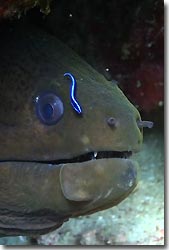 Because of the exquisite marine life, devoted divers and other nature enthusiasts, Raja Ampat is an area which has wide ranging marine conversation programs orchestrated by international NGOs as well as Indonesian organisations. The local people of Papua play an important role in conserving this underwater environment. Papuans who are black-skinned with frizzy hair and very similar in look to Australia's aboriginals are distinctive from other Indonesian people. 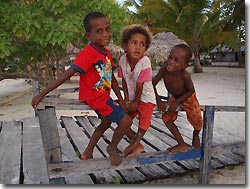 The lowland swamps are inhabited by swamp dwelling tribes striving very much on the abundance of fish in this area. They include the Marind-Anim and the Asmat who are well known for their former - and apparently still occurring - headhunting and other ritual forms of cannibalism. Some of the very recent evidence is close the Cendana Indo Pearl Farm facilities in Aljui Bay where we still saw 25 skulls lined up in a cliff face, gruesome evidence of a headhunting endeavour that happened around 2007. On a brighter side, a visit to Cendana pearl farm is very interesting and informative providing insights into the delicate process of producing pearls. At the time of our visit the farm employed over 180 mainly local people to cultivate about one million giant pearl oysters and extract pearls.

Aljui Bay represents only a very, very small part of Raja Ampat. The bay is on the western side of Waigeo which is one of the four main islands of the archipelago: Waigeo in the north, Salawati west of Sorong, Batanta north of Salawati, and Misool in the south. The name Raja Ampat in Indonesian literally means 'four kings' as there are four main islands. Over 1,500 small islands and reefs that surround these four islands make up the archipelago, many of those islands with untouched white sandy beaches, limestone cliffs and rainforest growing to the water's edge. Naturally such vast archipelago makes diving from a liveaboard a great option to explore the variety of marine life in a widely dispersed environment.

As for the diving schedule around Raja Ampat, we started just west of Batanta Island, which is one of the areas in Raja Ampat known for its excellent muck diving.

It also offers some fantastic hard coral sites at which you can see the rather 'flat' tasselled wobbegong. The gorgonian fans here and in many other parts of Raja Ampat are the ideal habitat for pygmy seahorses for which this part of the planet is so well known. We managed to find two different species of pygmy seahorses in this area: the Hippocampus bargibanti, Hippocampus denise and if you are lucky you can also find Hippocampus pantohe a very recent and unique discovery. During our muck dive exploration we also found an amazing variety of nudibranchs including the endemic Thecacera sp. (sp 5) and our very first ever Rough-snout Ghostpipefish (Solenostomus paegnius).

After the muck of Bantana we steamed South to the Wagmab area waking up to blue sunny skies. A dive site called Eddie's cave which starts with a bubble cave full of stalagtites revealed amazing variety of soft and hard coral species, a decent amount of reef fish and a few new nudibranchs including Gymnodoris rubropapulosa. Further at an island called Wayilbantan we dived as site our guides called Wedding Cake we encountered massive schools of glassfish chased by trevallies various Hippocampus denise and a school of roaming lionfish feeding in the current.

In general, diving Raja Ampat means strong currents, especially in the weeks after the full moon and it can be quite challenging when you suddenly see you bubbles float downwards or sideways. Being equipped with a good quality surface marker buoy and knowing how to use it is paramount in this area. For a novice diver it might not be the perfect destination and for those of us, who carry large amounts of photo and video equipment underwater, be aware that situations can change quickly underwater and good dive planning is extremely important.

Towards the middle of our journey we arrived at the Fiabacet area, probably the most visited area of Raja Ampat. This is also the home of Misool Eco Resort, where the second part of our trip took place, but that is another story.

The Arenui crew called this next dive Neptune Fan See, a narrow passage between two islands with generally at least some current. A large bommie at the entrance of the passage in 23 metres vibrates in amazing colours, of the many species of soft corals and colonial ascidians or sea squirts. It impossible to even think of a spot to put your finger, life overgrown with life, and in the passage, huge gorgonian fans over five metres in diametre in many colours, including a small fan with seven pygmy seahorses. We float past a huge wall covered in orange soft coral trees, there are loads of glass fish and the variety of life is just spectacular.

The Fiabacet-Boo area in southern Raja Ampat is a must go for those who like abundant fish life. There are fantastic walls, pinnacles and reefs with masses of huge pink, lilac and purple gorgonian fans and sea fans. One of the more famous sites, Boo Windows, includes a number of large swim-throughs (hence the name), which are partially above water during low tide. 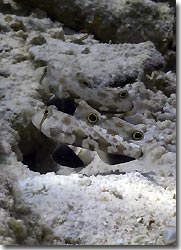 Boo Windows is a soft coral heaven with great light, often great viz, loads of schools of bluestripe or bengal snapper, yellow tail fuseliers, batfish and not to forget plenty species of nudibranchs. Even after years of travelling and diving the Coral Triangle throughout Raja Ampat in general we found it easy to find at least a couple of new species of reef fish on every single dive, a feat not managed in any other area we dived in the past.

Although Raja Ampat impresses with variety of reef fish and coral, even in this remote area of the world the impact of global overfishing is becoming apparent. There are generally not many big fish around apart from a few schools of barracuda here and there. Sharks are a rare event and occasionally a friendly Hawksbill Turtle glides past. Of course there are areas that are an exception which includes our next stop over, the classic manta dive of Raja Ampat, Manta Sandy further North in the Arborek area.

Manta Sandy is basically a Manta Ray cleaning station in 12-15m of water and on our two die there we saw at least 4 different mantas cruising in for most of the dive and the amazing thing about this dive site is that while you are in awe of the graceful mantas glinding past, in the sand below you can find Flamboyant Cuttlefish, Robust Ghostpipefish, Seamoths and many more rare 'muck dive' critters. This makes the Manta Sandy one of the most spectacular dives in the area.

Around the corner at Arborek Island lies another Raja Ampat favourite, Arborek Jetty, best known for its colourful softcorals growing on the jetty pilons. This structure has won many underwater photo competions as if allows nice silouette shots with light filtering through the jetty. There are plenty of nudibranchs and we spotted a big cuttlefish crusing along the shallow reefs. There were Ghostpipefish, pipehorses, stran

Towards the end of our journey, at Yangelo and Gam islands we found very beautiful hard and soft coral gardens and, again, a number of Tassled Wobbegongs (Eucrossorhinus dasypogon). Further to the more common fish such lionfish and various scorpionfish, we followed a large banded sea snake around the reef for more than 10 minutes.

And it was here we saw our first tail of the famous Raja Ampat Walking Shark (Hemiscyllium freycineti), which is a type of epaulette shark that come out at night and can be seen walking around on its pectoral fins.

At Aljui Bay close to the pearl farm we visited, we dived a number of sites that were treasure troves for small critters like mantis shrimp and fans with 7-10 pygmy seahorses (Hippocampus bargibanti), a Ringed pipefish (Dunckerocampus dactylophorus) and some big cray and octopus. Some of the walls in this area are literally covered in ascidians creating amazing seascapes. 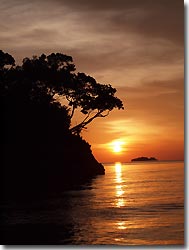 A must do night dive in this area is Cendana Pier - an easy dive on sandy bottom at 5 - 15m. There are many weird critters including the Cockatoo Waspfish, toadfish, Robust Ghostpipefish, Ornate Ghostpipefish, Bobtail Squid, a number of sidegill slugs (Pleurobranchus grandis) and some amazingly ugly beautiful crabs which we called transformers.

After lunch on the last day the crew set sails of the Arenui for tourist photos, then we steam back to civilisation towards Sorong. As the mobile phone networks start to take hold of our vessel, the communication-free peace is finally over.

Being on a liveaboard to dive Raja Ampat is a fantastic way to experience the diverse marine life across the varied dive site in this unique area. The Arenui offered luxury afloat in one of the greatest diving areas on our earth blending fantastic diving and awesome service so that exploring the archipelago became an extraordinary experience, a welcome massage and optional afternoon massages aided crafting this exceptional ambience. One thing remains certain, we could have easily spent another 11 days diving Raja Ampat from this exceptional liveaboard.