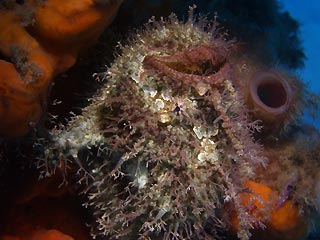 This Tasseled Anglerfish (Rhycherus filamentosus) was spotted during a shore dive in Port Phillip Bay, Melbourne, Australia, using a Olympus 5060 in a Ikelite housing and using a Alpha 2000 for lighting. Amazingly we saw two different ones on the same dive! We think they are the most amazing animal we have ever seen. They where both clinging vertically to an old pier pillon, but I as only able to photograph one of them.
Photocomp February '07 - Open