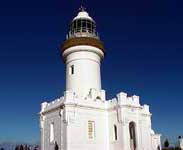 With resident hippies, surfers, rich urban escapees, actors and artists, this region has become a curious mix, with everyone knowing they live in a relaxed, unique destination. It sums up the travel brochure dream nicely with its quiet beaches, lush rainforests, buzzy seaside resorts and picturesque rivers and valleys.

Byron Bay's world-famous surf beaches will delight surfers and divers and those seeking an alternate experience will find new age therapies on every corner in Nimbin. The National Parks, rivers and rainforests will keep nature lovers happy, while abundant fresh local produce from Tweed Heads will satisfy the gourmands. Just be careful you're not seduced by the laid-back, blissful lifestyle. It's a fact that many tourists visit here, and decide to stay forever!

Locals have fought to keep Byron environmentally and socially aware. While tourism is a booming industry, it still boasts no McDonalds, no high rise buildings and no traffic lights.

A wealth of Byron Bay visitor information is available on the popular byronbay.com web site.

Lighthouse at the most easterly point - Photo Tim Hochgrebe 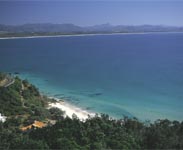 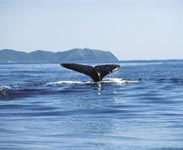 Tropical and temperate currents meet at this part of the NSW Coast, resulting in an abundance of species. Swim amongst Leopard Sharks or Grey Nurse Sharks and experience Manta Rays up close and personal. Several species of turtles can be seen on a regular basis. Benthic growth such as hard and soft corals and sponges colour the rocky reefs and boulders. Try to find octopus and crayfish hiding under ledges and in crevices or search for colourful nudibranchs found at many diving locations.
Dive Julian Rocks Marine Reserve, which is now part of the Cape Byron Marine Park and has also been declared a critical habitat for Grey Nurse Sharks.
For a snorkel or a shallow shore dive try the Tassie II wreck at Main Beach
Don't forget to check out dive spots away from Julian Rocks, such as Spot X, Mackerel Bowl and Cape Pinnacle.

Driving: Much work has been done to the Pacific Highway making for a more enjoyable drive. Byron Bay is about a 12 hour drive from Sydney and about 2-3 hour drive from Brisbane.

Buses: Buses arrive in Byron Bay regularly at the Bus Depot located in the centre of town and can offer a convenient, budget way of getting here. Most bus companies located on the east coast of Australia have a regular service to Byron Bay.

Trains: Currently there are no trains to Byron Bay.

20th July 2003 .... that is the first time I drove down from the Gold Coast to Byron Bay and arrived at Sundive, jumped on one of their boats and set out to dive Julian Rocks - and I have been addicted ever since

Although Byron Bay is one of Australia's most popular holiday destinations, only few people realise the fantastic marine environment Byron Bay has to offer. This popular subtropical township renown for its beautiful beaches and stunning hinterland is part of the Cape Byron Marine Park and home to the Julian Rocks Marine Sanctuary.