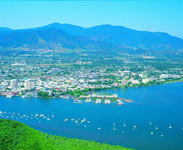 Cairns is the capital of Tropical North Queensland, a hot spot for access to the Great Barrier Reef and the primary gateway to Northern Australia. Nestled between densely forested mountains, azure waters of the Coral Sea and patchwork cane fields bordering the city streets it is a city of varying contrasts.

A focal point for the city is the Cairns Esplanade. Almost two kilometres of landscaped parkland fringes a busy thoroughfare and restaurant strip on one side, and a natural harbour inlet on the other.

All the attributes of a world class modern city are to be found in Cairns: International air access, rail systems, high-standard accommodation facilities, an art gallery, botanic gardens, university, a casino and a convention centre.
Almost a century of architecture is reflected in the city streets - a comfortable blend of traditional Queenslander style and modern designs. Modern buildings grace the cityscape with a mixture of architectural designs including the Reef Hotel Casino, Cairns International Hotel and the Cairns Convention Centre. 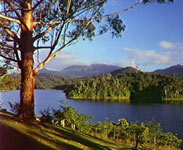 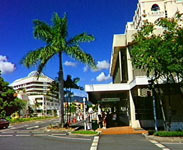 The Cairns International Airport is located only several minutes drive north of the city centre.
Major road access to the north, south and west. Good railway connections from the South.

Escaping the Pommie winter, we flew into Cairns and of course I wanted to get straight out for a look around the Great Barrier Reef.

What is our Coral Sea?

The Coral Sea is a tropical marine jewel, which lies east of the Great Barrier Reef Marine Park. It is one of the last places on Earth where large marine animals can still be found in great numbers.