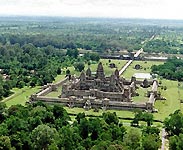 Today, the Kingdom of Cambodia is once again a peaceful place to visit. It is, at present, in the process of getting rebuilt. Cambodia now incorporates a Parliamentary Government system.

Across the land of green rice paddies, shining blue waters, great wandering rivers and lush forests, the people of Cambodia are re-learning the arts of their ancestors.

The tourism industry is the country's second-greatest source of hard currency after the textile industry. More than 60% of visitor arrivals are to Angkor, and most of the remainder to Phnom Penh. Other tourist hotspots include Kompong Som (Cambodia's only port), which has a popular beach.

The Angkor Wat temple complex is the best preserved example of Khmer architecture. Angkor means "city" and Wat "temple". Out of bounds to tourists during the civil war, it gained particular worldwide attention after featuring in the movie Tomb Raider. The Bayon, also at Angkor, is located at the center of Angkor Thom. It has 54 towers, each bearing four smiling faces.

Many tourists also visit the Tuol Sleng Museum, the infamous prison of the Khmer Rouge, and Choeung Ek, one of the main Killing Fields; both display photographs, skulls and bones of victims of the autogenocide. 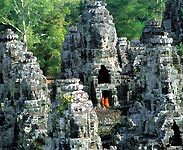 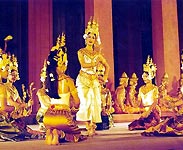 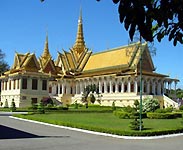 Essentially Cambodia has four seasons; November ¬ñ February, cool/dry; March ¬ñ May, hot/dry; June ¬ñ August, hot/wet; September ¬ñ October, cool/wet. The months of December and January are usually considered the best for tourists with lower temperatures and reduced humidity levels. April is generally the hottest month. The monsoons during June ¬ñ October usually follow a pattern of clear mornings with a period of rain in the afternoons.

Diving is still very much undiscovered here but the region has great potential which a few operators have started to realise.

Most international visitors arrive by air at the airports in either Phnom Penh or Siem Reap. These airports are serviced by an increasing number of airlines. A growing number of tourists are also entering overland from Thailand and Vietnam.