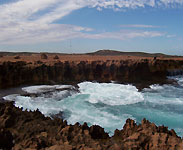 In the southern part of this this region (subject to seasonal rains), you can immerse yourself in, and wander through spectacular fields of yellow, pink and white coloured everlasting daisies during the season (late July - early September), and marvel at the well-known wreath flower (Leschenaultia macrantha).

Further up is a region that offers an excellent combination of raw outback adventure activities with unique water-based experiences.

It is in the Gascoyne that you have the opportunity to live like a true Australian stockman - you can shear sheep and live in the shearers' quarters of one of the many working outback stations.

The world's largest monocline, Mount Augustus, awaits anyone adventurous enough to endure the 3-hour trek to its peak; and there are plenty of four wheel drive tours along the surrounding coastal cliffs and gorges that offer camping under the stars.

Mother Nature was particularly kind to the Gascoyne region, so much so, it is teeming with natural phenomena such as the Monkey Mia dolphins, dugongs, whale sharks and the world's longest fringing reef - the Ningaloo Reef.

Closer to Port Headland Ancient mountains, breath-taking gorges, vast plains and tranquil oases greet new explorers to the Pilbara, Engulfed by a 2.5 billion year old landscape are three world-class national parks, including Karijini, regarded as one of the natural jewels of Western Australia.

Pristine beaches, beautiful coral grounds and abundant fish make the coastlines a must for the fishing or diving enthusiast. Acres of coral grounds are said to be on a par with Australia's best, while beaches offer excellent snorkelling and fishing all year round.

The warm waters are the destination of migrating humpback whales while local beaches come alive for a few nights each year while turtles lay their eggs.

Temperatures range from 33°C in February to 22°C in July. Most rain falls between May and July, however tropical cyclones, decaying cyclones or tropical cloud bands between January and July can produce unusually heavy rainfalls. The second half of the year is normally very dry.

Contour ROAM2 Camera
The ContourROAM2 is the ideal camera for a fun and easy experience capturing your adventures anywhere life takes you. The award-winning design is tough, compact, waterproof to one meter.
$AU 249.00
3% Cardholder's Discount!

Leaving at 6.30 in the morning for two days driving was a tough ask for some. "Where's Paris" was the question. My response was "In France", "No, Where's Paris Knight?", "In France when it's dark!". Some people are just not morning people I was quickly coming to understand.