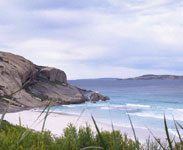 Esperance is a beautiful regional township of approximately 9,000 people nestled on the shores of Esperance Bay. A necklace of several hundred islands comprising the Recherche Archipelago adorns the coast of this most beautiful region of Australia. As a consequence, Esperance is known as The Bay Of Isles. Visitors to Esperance from around the world are charmed by its friendly people, delightful lifestyle and ideal year round climate.

The whales of Western Australia's southern coast are just one of the natural attractions that have made areas surrounding the town of Esperance such an outstanding attraction to visitors. Six national parks, fabulous beaches, offshore islands and small seaside communities are rewarding those who give time and effort to discovering this stunning corner of Western Australia.

Like so much of Western Australian settlement, Esperance began with a rush: a goldrush. The 1890s discovery of gold at Kalgoorlie and Coolgardie brought hundreds of fortune seekers to Esperance en route to Kalgoorlie. Had the government of the day first built a railway between Esperance and Norseman to link with the Goldfields, rather than build the line to Perth, Western Australia's subsequent history might have been vastly different.

Where else in the world can you dive one of the largest divable wreck in the world - that of the Sanko Harvest? Nowhere but Esperance, 720 kilometres south-east of Perth. However, the wreck is only divable for a few days every year and is in exceptionally deep water. The good news is that there is superb diving throughout the region.

One hundred or more granite islands form the Recherche Archipelago, which stretches along 200 metres of coastline. Some islands are only a stone's throw from the shore and between each of them are numerous submerged rocks and reefs that form a diver's paradise. Many good dives are accessible from shore. Underwater visibility is often 30 to 60 metres.

The best time to visit is November, December, March, April or May.

Storm Case iM2050
Nothing stands up to the power of Storm Cases. The iM2050 meets airline carry-on regulations by fitting under seats and in overhead compartments.
From $AU 84.00
5% Cardholder's Discount!