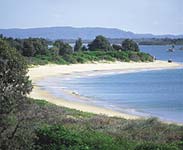 Six of Australia's precious World Heritage Listed areas can be found here. Mt Warning which has a rich history for the Aboriginal people, providing a traditional mythology that extends back to the Dreamtime. Many smaller parks, nature reserves, rainforest remnants and State Forests offer the visitor a wonderful experience.

This region also includes Cape Byron, which is the most easterly point in mainland Australia, and one of the best places for seasonal whale-watching.

Scattered throughout the Northern Rivers are dozens of delightful towns, villages and rural hamlets. There are classic country hotels, cafes and guesthouses and an abundance of fetes, fairs and festivals.

The region's cultural mix has produced a vibrant and exuberant regional identity,with thriving visual and performing arts communities. Food lovers will find a new taste sensation at every turn - with an almost unlimited choice of eating houses and dining styles.

A visit to the world famous seaside resort town of Byron Bay wouldn't be complete without a walk to the Cape Byron Lighthouse, Australia's most easterly point. 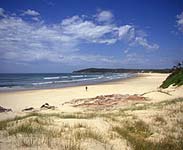 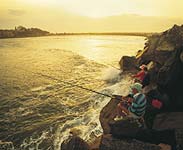 Rock fishing off the breakwall - Photo courtesy of Tourism NSW 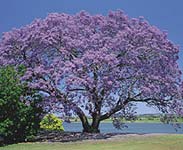 With average summer temperatures of 21°C - 28°C and average winter temperatures of 15°C - 21°C, both locals and visitors are able to enjoy plenty of outdoor activities including the many festivals throughout the year.

A mix of temperate and tropical currents provide this part of the New South Wales?¢¬Ä¬ô Coast with a myriad of marine creatures. Mainly rocky reefs with coral outcrops.

Most localitlies just off the Pacific Highway. Airports at Coolangatta and Ballina serve the area.

Jude and I left Townsville on three weeks holidays heading South of Brisbane to Murwillumbah in northern NSW, whilst down there I managed to do 3 dives.

20th July 2003 .... that is the first time I drove down from the Gold Coast to Byron Bay and arrived at Sundive, jumped on one of their boats and set out to dive Julian Rocks - and I have been addicted ever since