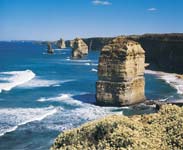 The Great Ocean Road winds westwards from the major regional city of Geelong to the South Australian border. Along with striking ocean views, the region contains laidback coastal towns and maritime villages, and there are plenty of opportunities for bushwalking, swimming, surfing, fishing and whale-watching.

The Great Ocean Road itself hugs the contours of Victoria's rugged southwest coast, taking visitors on one of Australia's greatest and most inspiring coastal drives. From Torquay, near Geelong, to Nelson almost 300 kilometres to the west, the road snakes past cliffs, scenic lookouts, waterfalls, rainforests and sunken ships.

One of the most visited stretches of road is the Port Campbell National Park, home to significant areas of native bushland and fauna. Buffeted by wild seas and fierce winds, the coastline has been sculpted over millions of years to form a series of striking natural features. You can wander the boardwalks and paths at the Twelve Apostles, remarkable limestone rock stacks rising from the ocean, while further along, London Bridge is another amazing rock formation not to be missed.

The Great Ocean Road has a rich maritime past. Historic towns such as Port Fairy and Portland allow you to enjoy seafaring village life, with their fishing wharves, old pubs and beautifully preserved colonial buildings. As well, a number of ships from the nineteenth and twentieth centuries have foundered off the rugged shipwreck coast, and their histories are recounted in many of the museums in the region. 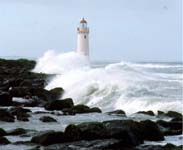 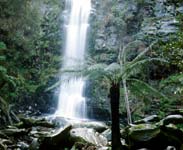 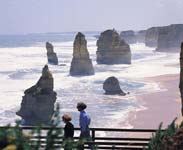